<This year’s Azuma-odori will be canceled, taking preventive measures against the spread of the novel coronavirus (COVID-19).>

Did you know that at the end of every May, as summer begins, the Shinbashi Enbujo theater is transformed into a magnificent, mega version of a traditional ryotei restaurant? Groups of gorgeously garbed geisha dance gracefully on stage to the strains of the shamisen, the finest food and beverages from local Shinbashi ryotei providing the perfect garnish to this outstanding show known as the Azuma-odori. This is the place to experience the sumptuous ryotei culture of Shinbashi, usually only accessible to a privileged few. The 2020 performance of the Azuma-odori will be its ninety-sixth staging, with excitement mounting in the lead-up to the centenary. We spoke with Shingo Okazoe, fourth-generation proprietor of Kanetanaka, venerable Shinbashi ryotei and Azuma-odori stalwart. Okazoe is also president of the local hospitality association, the Tokyo Shinbashi-kumiai.

Ryotei culture and geisha
Okazoe launched our interview with a question of his own: “What comes to mind when you hear the word ryotei?” Many see ryotei as exclusive establishments where entry is by introduction only; an unknown realm of Japanese culture shrouded in mystery. Okazoe described the ryotei as follows: “Housed in a building in traditional Japanese architectural style, with incense burning inside, a hanging scroll and flowers adorning the tokonoma alcove, and waitresses dressed in kimono serving a series of dishes with visual as well as flavor appeal. Ryotei also differ from other dining establishments in providing geisha entertainment in form of singing, dancing, or traditional music played on a shamisen or other instrument while you enjoy your meal and drinks. The ryotei is a place where various aspects of Japanese culture meet and mingle under one roof. Actually,” he adds, laughing, “put simply I guess it’s a place to enjoy a good dinner show.” 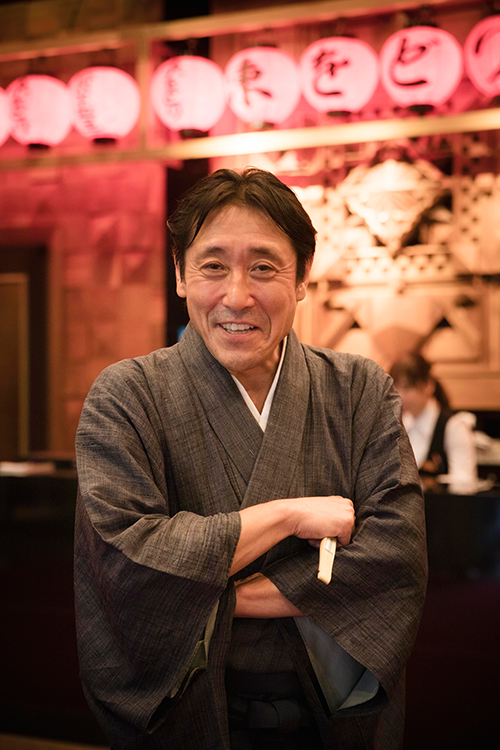 Shingo Okazoe is serving his ninth year as president of the Tokyo Shinbashi Kumiai, organizers of the Azuma-odori.
Photography by COO PHOTO

According to Okazoe, ryotei culture emerged in the late Edo and early Meiji period. “This was when the pleasure districts known as karyukai developed across Japan. The entertainment here, which was extremely popular, consisted of three types of business: okiya that hired out geisha, restaurants that provided catering, and chaya or teahouses that supplied the venue. Of these pleasure districts, by the Meiji era the one in Shinbashi had developed to such an extent that it was described as Japan’s number one spot for socializing, with senior government officials and financial bigwigs flocking to the teahouses and restaurants there. Up until the war, Kanetanaka itself was also a teahouse that took in outside catering.”

Having thus gained more opportunities to show off their talents to a discerning audience, the geisha of Shinbashi worked hard to enhance their skills even further. The Shinbashi Enbujo theater was established in 1925 by the local geisha and restaurant associations as a place to showcase the culmination of these efforts, and the inaugural Azuma-odori held the same year to mark the theater’s opening.

The post-war years, golden age of the Azuma-odori
From that point on the Azuma-odori was staged at the Shinbashi Enbujo as a regular dance recital, until destruction of the theater in wartime air raids made it difficult to sustain. Okazoe says, “After the war, out of a desire to offer hope and a little escapism to those who lost so much in the conflict, a group of my predecessors, including my great-grandfather Tetsuo Okazoe, second proprietor of Kanetanaka, started working toward the theater’s recovery. Thanks to them, the Shinbashi Enbujo was rebuilt in 1948, and the Azuma-odori revived, predominantly through the efforts of Kikumura, head of the geisha association.” Around this time many teahouses, including Kanetanaka, began to also serve food, making the transition to today’s ryotei.

Amid the dearth of entertainment options in the immediate postwar years, the Azuma-odori had a change of direction, transforming itself from a dance recital into a form of dance drama with a narrative component. A major talking point during this period was the involvement of some of Japan’s leading artists in the event, with later winners of Nobel Prize in Literature Yasunari Kawabata and Junichiro Tanizaki serving as scriptwriters, and nihonga master Taikan Yokoyama painting scenery. According to Okazoe, “The shows were made even more exciting by the appearance of star geisha. Fans of Marichiyo, who was renowned for her splendid portrayal of male characters, could even buy photos of her: these days I guess we’d call her an idol. Her fame spread among female students and others with no previous connection to ryotei or geisha, to the extent that long queues would form in front of the Shinbashi Enbujo.” 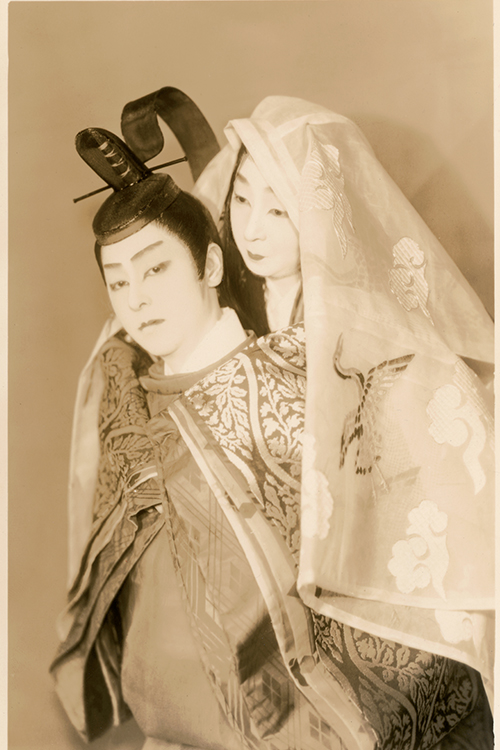 Photo of star geisha Marichiyo, who inspired many young women to pursue careers as geisha.
Courtesy of Tokyo Shinbashi-kumiai

Turning the Azuma-odori into a giant ryotei
In the postwar years, Shogo Okazoe, third-generation proprietor of Kanetanaka, also contributed greatly to the recovery of the Azuma-odori, becoming actively involved in its production since he was a student. The star geisha emerged, and the event entered its golden age. Around the turn of the millennium however the Azuma-odori began to decline in popularity, and urged on by a local community concerned the event was in crisis, current proprietor of Kanetanaka Shingo Okazoe, son of Shogo, embarked on a major overhaul of the show.

Okazoe admits that he never thought he would interfere in the Azuma Odori as long as his father was alive, but says that with help from those around him, he pushed ahead almost obsessively with the necessary changes. The first step was working desperately to get the geisha on his side. Having finally convinced them all of the need for change, following endless discussions, he then went straight to his father at the Enbujo. But Okazoe senior proved no pushover either, expressing fierce opposition to the plans before finally declaring that if Shingo was intent on “messing with all that our ancestors have built up, be it on your head.” “And that’s what I have to remember, even now,” Okazoe says, obviously aware of the heavy responsibility he bears.

Around ten years later, the Azuma Odori changed from dance-theater to a more accessible festival format, also turning into a “mega ryotei” open to all-comers. True to Okazoe’s description of ryotei as a point of intersection for Japanese culture, the revamped Azuma Odori offers a mix of traditional culture revolving around the trio of food, alcohol, and geisha dancing, including of course the geisha performances, plus bento boxes teamed with the finest sake from ryotei in between acts, and tea ceremony performed by geisha. Performances have also been compressed into an hour with two acts, to hold the interest of those less versed in the geisha arts. Okazoe explains, “Each year the head of a different school of dance—Hanayagi-ryu, Nishikawa-ryu, or Onoe-ryu—takes charge of the dancing, allowing the audience to enjoy a different Azuma Odori each time. The finale though, is the one thing on the program that never changes. A stunning geisha ensemble in trailing black formal kimono lines up on stage to recite the prologue, before closing proceedings with a powerful song and dance number of seamless perfection. It never fails to give me goose bumps. In that final moment, when the geisha throw tenugui cloths into the audience, stage and spectators unite to create the climax of the Azuma Odori.” 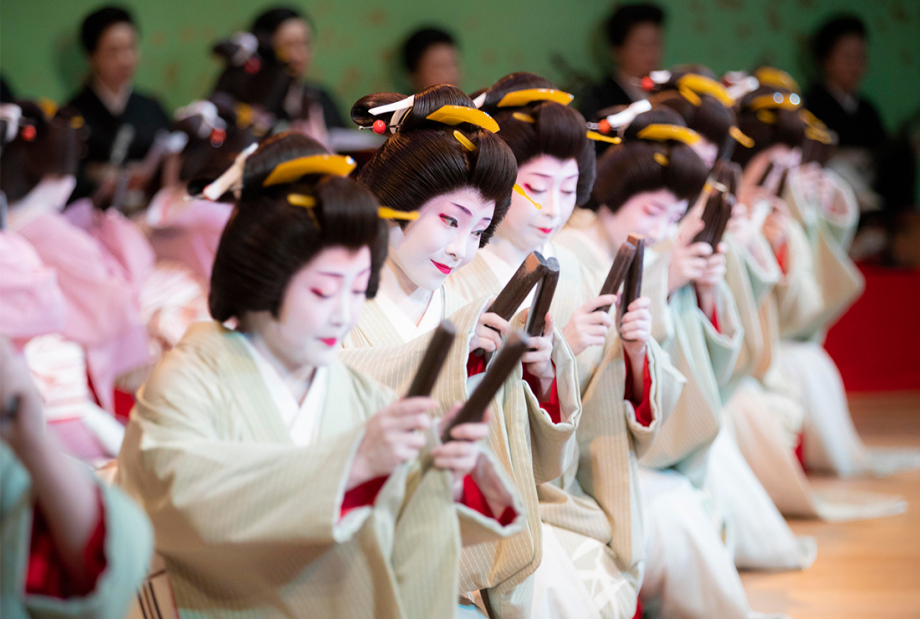 In just five years the Azuma Odori will celebrate its 100th performance. Okazoe says he has even more exciting additions in store for the new, revamped event. A festival built up by his predecessors and handed down over a century, this dazzling, dream-like show offering everyone the chance to escape from the everyday is acquiring new fans with a new format to fit today’s world.

96th Azuma Odori
azuma-odori.net/english/
*This year’s Azuma-odori will be canceled, taking preventive measures against the spread of the novel coronavirus (COVID-19).