<This year’s Azuma-odori will be canceled, taking preventive measures against the spread of the novel coronavirus (COVID-19).>

The Azuma-odori serves as a showcase for the diverse talents of geisha ranging from the newest novice to the most seasoned entertainer, and from every school of dance in Shinbashi. Yet the dance performance by veteran geisha, with its outstanding artistry and aura, is still perhaps the most dazzling.

Embarking on her own geisha journey as a teenager, Kokimi is now one of these veterans, and also proprietor of an okiya (geisha house) training young aspirants herself. Still striving personally for artistic perfection decades after her debut, she offered some unique insights into Shinbashi geisha, and the Azuma-odori. 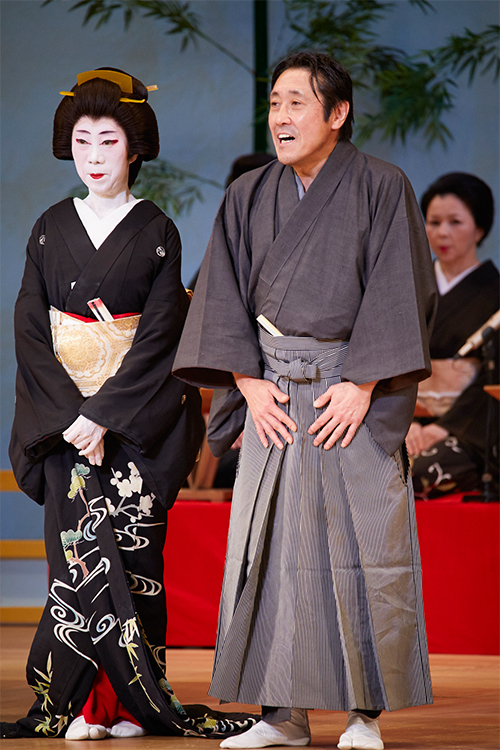 A mirror of Japanese womanhood
As proprietor of Kikumorikawa, currently the largest okiya in Shinbashi, Kokimi has nurtured many young women to full-fledged geisha status over the years, with last year seeing the arrival at the okiya of another promising novice. Novices spend three to six months undergoing intense training in proper behavior and deportment, language, dressing in kimono, kneeling in seiza style, tea service, and dancing, and if they pass their exam, are able to debut as geisha.

Kokimi says she lives with the novice geisha—generally aged in their late teens/early twenties—for at least the first year, the idea being that by doing so, Kokimi can teach the novice how to be the kind of woman she would be confident to dispatch to any occasion, at the same time helping them to nurture and extend their own individual traits. As well as the obvious lessons in bowing, kneeling, and wearing kimono, she says she ensures they acquire the bare minimum of feminine manners, noting for example that “A good woman never uses bad language.” Kokimi also says she wants her charges to “first and foremost become attractive, refined women who are punctual, keep their word, and are thoughtful toward others.” Another her tasks is to teach novices about unique aspects of Japanese culture, including events, rituals, decorations and other arrangements particular to Japan as a land of four distinct seasons. With a motherly warmth, Kokimi says she aims to “build a lovely mentor-pupil relationship that allows me to impart various sorts of knowledge and learning, a bit like the professor in My Fair Lady.” 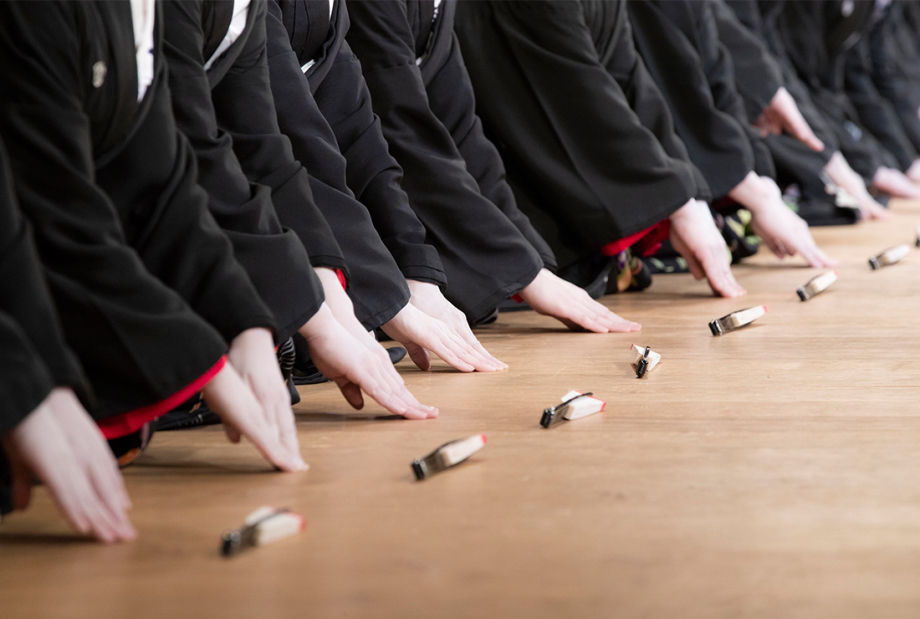 The global appeal of traditional Japanese performing arts
Japanese geisha culture has long been popular outside of Japan too, and Kokimi says she has played host to many overseas guests over the years. By her own admission finding English a struggle, she has worked hard to ensure she can communicate even to some degree with guests from other countries, for example by taking English conversation lessons. Thinking about it, encountering geisha, and in the unfamiliar setting of a ryotei restaurant, must be a little intimidating for guests too. Which is why as a hospitality professional in the traditional sense, Kokimi says she “wants guests to simply enjoy the ambience of the situation, without worry,” adding “my job is to do my best to make them happy.”

As one enduring memory of time spent with foreign geisha fans, she spoke of a trip to Washington twelve years ago to perform at the National Cherry Blossom Festival, held every March–April when the 3000 or so cherry trees gifted by the city of Tokyo to Washington in 1912 burst into full bloom. A group of Shinbashi geisha including Kokimi danced at the festival in front of an audience of around 150, as part of a program to promote awareness of Japanese tradition, history, and hospitality. “I was thrilled to be able to perform in front of so many American guests. It was one of those times when I felt truly proud to have completed all that rigorous training to become a geisha.” 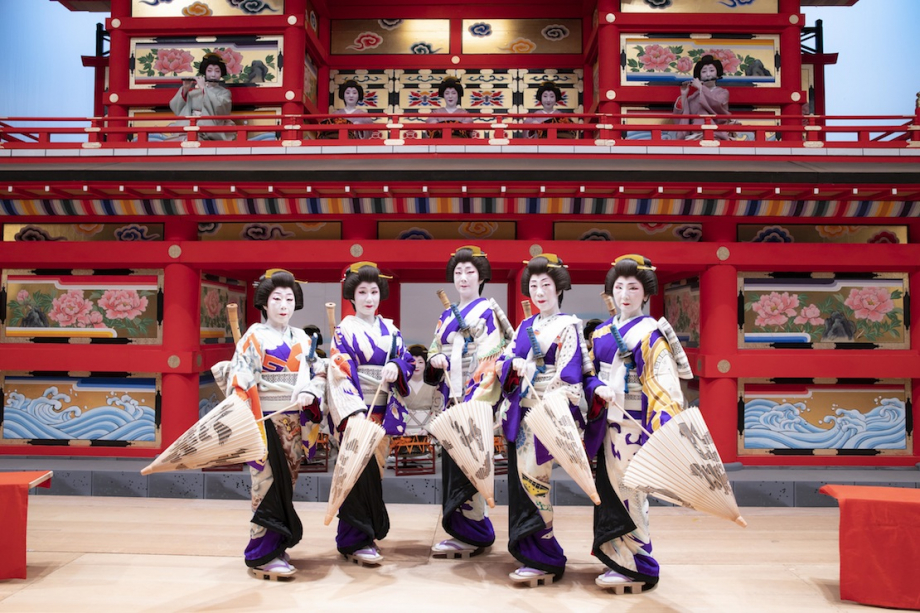 Yearly opportunity for Shinbashi geisha to strut their stuff
According to Kokimi, the Azuma-odori is “the goal of all Shinbashi geisha.” For entertainers who rarely get to perform for a large audience, the annual Azuma-odori is a truly special opportunity to present the fruits of their day-to-day practice to the general public. In saying this, there are three schools of Japanese dance in Shinbashi: Hanayagi-ryu, Nishikawa-ryu, and Onoe-ryu, with geisha from the different okiya studying these different variations. Managing to have all the geisha moving with perfect timing on the same stage to the same music without even the slightest slip-up is no mean feat. Kokimi says it is thus important for dancers from the different schools to mix with each other on an ordinary basis, to stay in tune with each other. Then as the day of the performance approaches, they rehearse from morning to night. If their efforts are rewarded, and one of the younger geisha scores a good part in the show, as their mentor and teacher, Kokimi is also delighted. 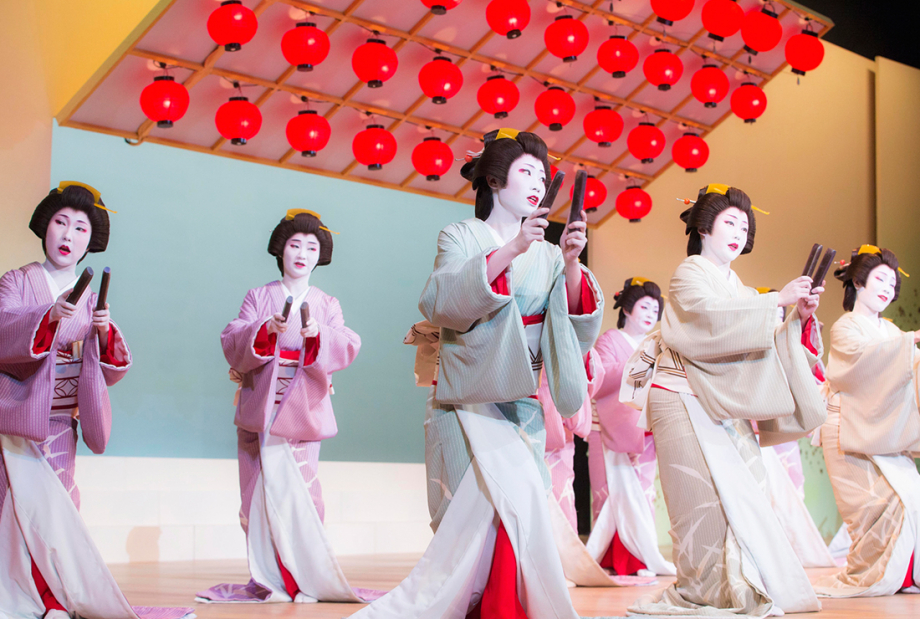 Konatsu, from Kokimi’s okiya Kikumorikawa, who made her debut in 2018 (third from left).

Casting geisha in the show demands a long-range view, of five or ten years. “First, it takes five years for them to wear a black kimono properly, and ten before people say it was good that particular individual was given a part.” Like any other of the geisha’s artistic accomplishments, it’s a tough road. Kokimi herself says that when she was young, she aspired to be part of the finale of the Azuma-odori, in which only those known as natori, who have mastered the skills to the proper level and are permitted to take a stage name, were able to perform. She worked desperately to gain that mastery and become a natori, a process said to require seven or eight years of training. 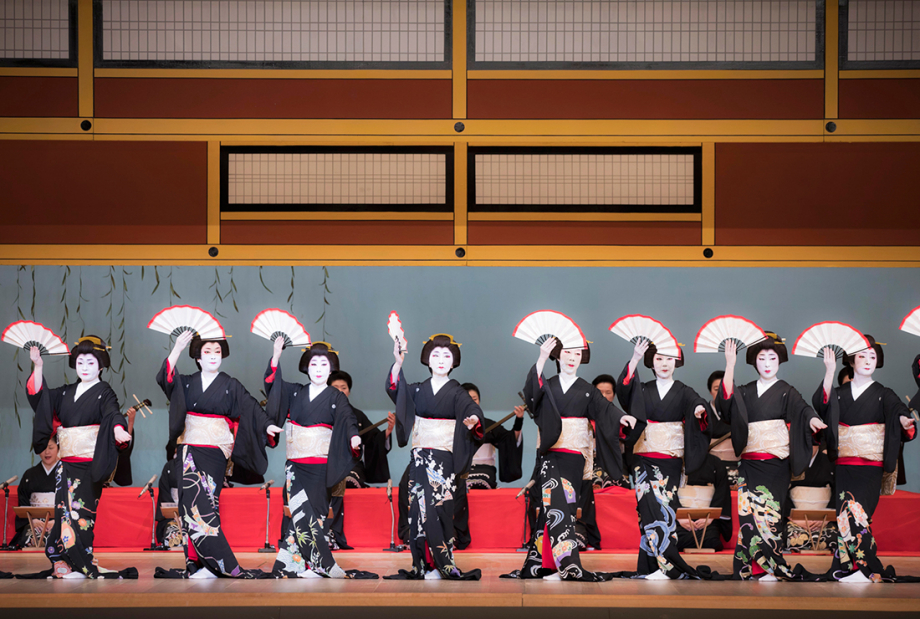 Sustained by geisha grit and ryotei commitment, the Azuma-odori has run continuously, in one form or another, since 1925. The number of geisha in Shinbashi may be on the decline, but traditions maintained since the Edo period continue to be passed down today from veteran to novice. For four days every year, the public is permitted a glimpse into geisha entertainment at a ryotei with its alluring hint of mystery, something normally accessible to just a privileged few, in a festival for which performers are now striving to hone and deepen their skills ahead of the hundredth performance in 2024, that offers an opportunity to savor the ultimate in Japanese “playtime” culture.

96th Azuma-odori
azuma-odori.net/english/
*This year’s Azuma-odori will be canceled, taking preventive measures against the spread of the novel coronavirus (COVID-19).