Glass is a mysterious thing. It can be transparent, translucent, or opaque; thin, delicate, and ornate or thick, heavy, and stark. It doesn’t deteriorate or corrode over time—some glass artifacts have survived for thousands of years—yet it’s a very brittle substance and easily shattered. As more and more Japanese artists explore the protean possibilities of glass, their ingenuity has begun to attract notice around the world, particularly since the turn of this century.

Artists in glass: the next generation
Text by Noriko Inoue

Japan’s glass craft scene is on a roll today. Glass artists are pioneering one new style after another, creating works not quite like anything seen anywhere else in the world.

Until very recently, glassmaking was not a popular vocation in Japan, and was largely unrecognized in arts and crafts circles. Few places taught glassmaking techniques, and the market was far smaller than those for pottery or lacquerware. Over the past two decades, though, the number of artists working with glass has grown, with the last five or six years seeing an unprecedented burst of creative activity. Many glass artists have absorbed Western techniques and taken them in a markedly different direction, giving form to a distinctly Japanese sensibility. 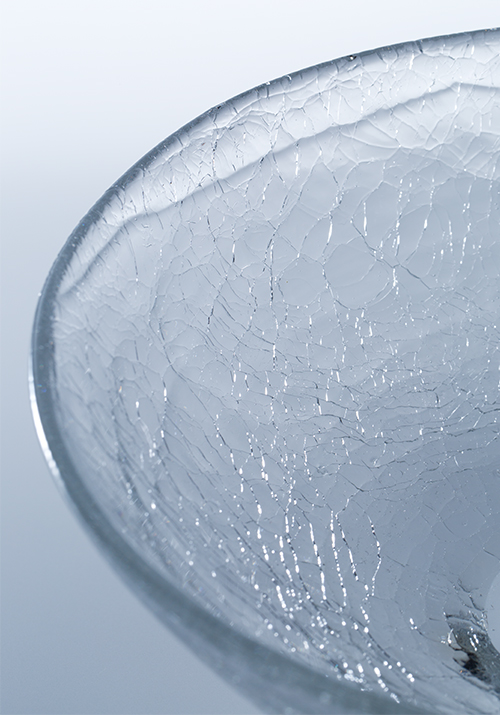 Shallow bowl by Daisaku Hashimura. Cracked-ice glass, as this style is known, is made by cracking a piece of shaped glass, then refiring it between two unbroken layers. Invented around the 16th century, the procedure results in thick vessels endowed with both gravity and a fragile beauty.

Some innovations can be seen in houseware. Practical, utilitarian designs abound that provide appetizing settings for food and drink even as they showcase the artists’ ingenuity and technical expertise.

Novel designs in cut glass, lace glass, sturdy cracked-ice glass, and the light and graceful pâte de verre (a method of making glassware that came into vogue in 19th-century Europe)―at long last, it seems, glassware is ascending to its rightful place in Japan’s indigenous tradition of houseware design. It’s truly a new age for glass craft in Japan. 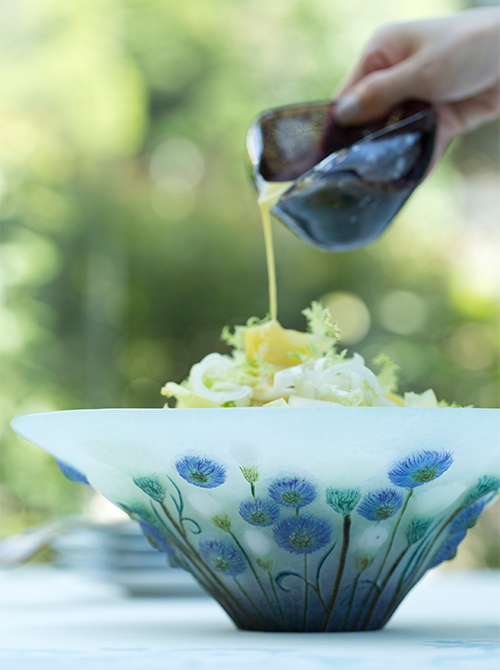 Ideal for summer garden parties, Ayuko Iizuka’s bowl is decorated with wildflowers that blend perfectly into an outdoor setting. The small lipped bowl from which dressing is being poured, by Yukiyasu Azuma, boasts a stylish, clean-pouring spout.

But why now? Reasons include new educational facilities and other institutions that accommodate glass craft, as well as the relatively short history of glassmaking in this country, which has kept it free of the pressures of tradition, like those that weigh on Japanese ceramics. Young artists, for example, find fewer obstacles to innovation if they work in glass. Some combine skills in other arts, such as pottery, lacquerware, and dyeing, to come up with new ways of expressing themselves. The relatively new medium affords them the freedom to cultivate their talents through experimentation with untried techniques, unhindered by conventional wisdom that says things must always be done a certain way. 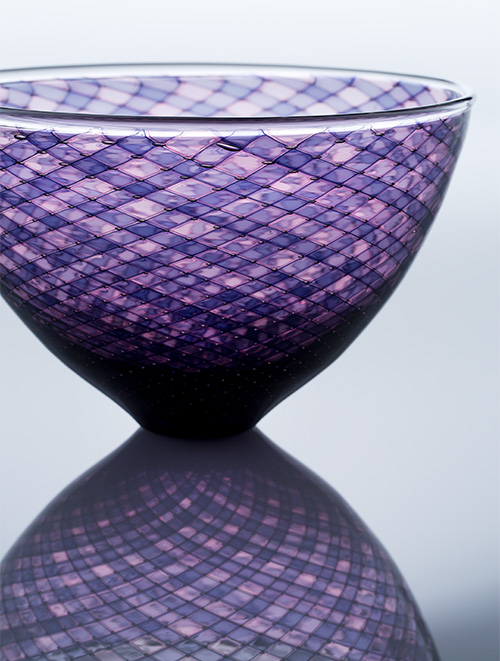 Bowl by Hideaki Kakurai. The piece utilizes the laceglass technique, leaving air bubbles in the gaps to produce a complex and vibrant pattern.

The creation of beauty in the applied arts requires inspired design, technique, conception, and sensibility. I believe artists need to excel in each of these areas, but they must also be capable of bringing them all into balance. Technical skill alone does not guarantee a beautiful object. In the glassware that has grown so popular in Japan lately, solid technique is further reinforced by an innate sense of refinement and a passion so strong that it’s clear for all to see. Together these elements exert a powerful pull on the heart that can’t be put into words. It’s almost impossible to resist the urge to pick these vessels up and try to imagine what delicacies would look best served in them. 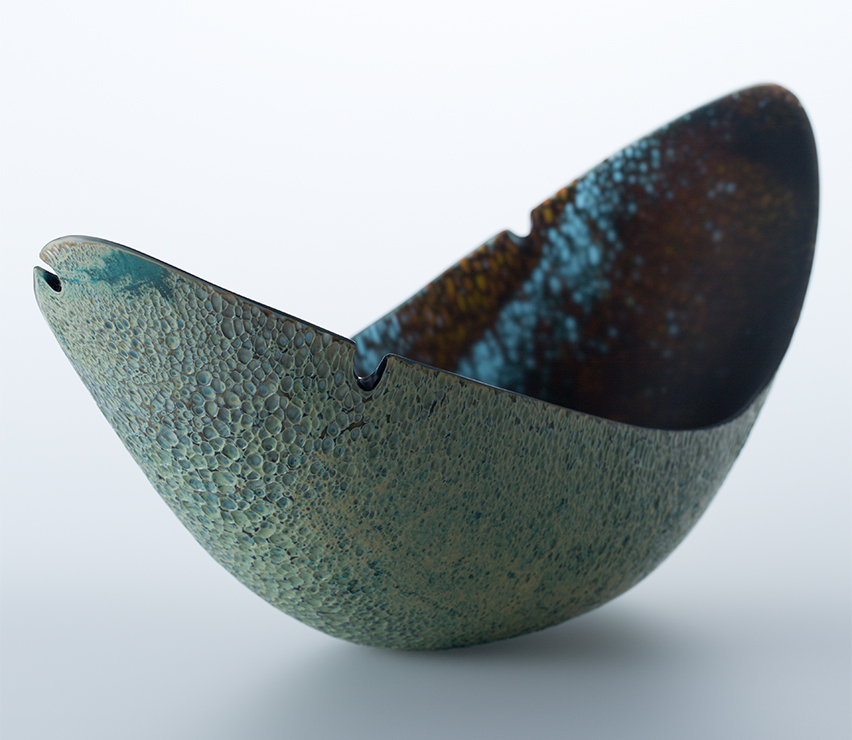 “Natural Lace” by Midori Tsukada. It took a great deal of research and experimentation to portray lace-like formations in nature by assessing the correct temperature for melding silver and copper foil into the glass to achieve the variegated coloration and bubbly appearance she was striving for.

Growing up in an era of plenty, these young artists had their tastes shaped by the many beautiful things around them. Now, drawn to the expressive versatility of glass, they apply their energy to creating objects that not only serve a practical purpose, but also inspire us and add beauty to our daily lives. Glassware is becoming an important part of our dining aesthetic. May it continue to be so for many years to come.

Noriko Inoue
After working on the editorial staff of a women’s magazine, Inoue became involved in lifestyle planning and event production. In 2000 she opened Gallery Kai, which focused on glass works, but which unfortunately was forced to close in 2008. She now freelances as a planner and producer of exhibitions, and develops educational opportunities for artists who want to work with glass.