Long known for its fruit trees, the Hokkaido town of Yoichi has more recently turned to the cultivation of quality wine grapes. Though on the same latitude as Italy’s Tuscany and Spain’s Rioja region, Yoichi is the most northerly winemaking area in Japan. Winters are so harsh that grapevines spend the season buried undersnow, a rarity among the world’s vineyards.

Founded in Yoichi in 2014, Camel Farm Winery completed its winemaking facility in 2017 and released its first vintage just a year later. Several factors—the dedication of the vintners, local history and traditions, community support, thorough staff training—have helped set the label on the fast track to becoming celebrated worldwide for its novel approach to winemaking. In autumn 2019 the quality of its products was recognized by Assoenologi, the Italian Winemakers Association. 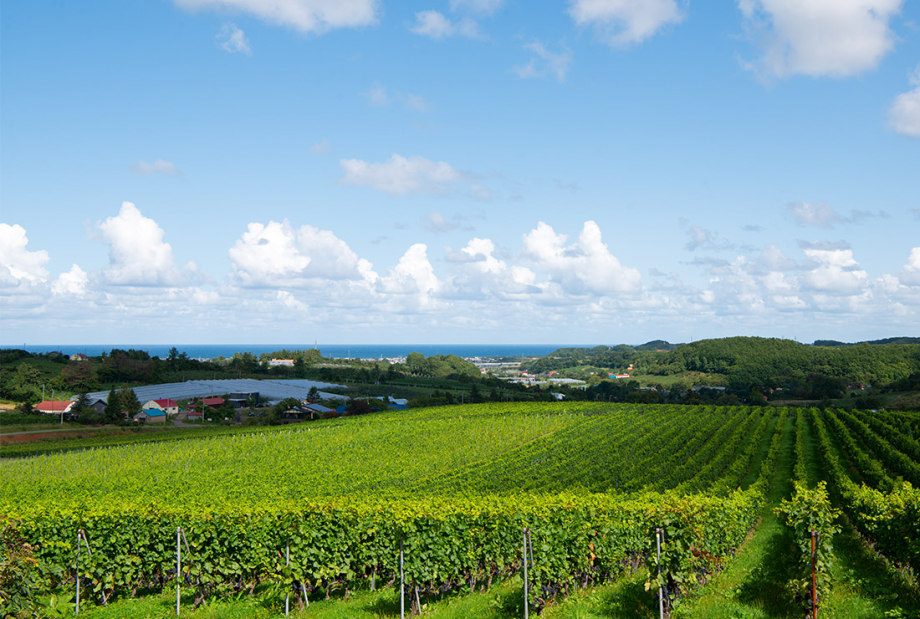 Looking out over the vineyard to the Sea of Japan. Sea breezes are said to bring valuable minerals to the fields, while mountain breezes ward off diseases.

Yoichi, frontier for new adventures in winemaking
Eminently suited for the cultivation of wine grapes, the western Hokkaido town of Yoichi was designated a special zone for small-scale wine production in 2011. Since then a number of skilled practitioners have set up private domaines that produce a variety of excellent wines. One such enterprise is Camel Farm Winery, opened in 2014 by the Camel Coffee Group, which is committed to supplying Japanese consumers with safe and worry-free foodstuffs from around the globe. Years of firsthand experience with the world’s food-producing areas have made people at the group keenly aware of the need for environmental responsibility at home as well. They also recognize Japan’s unique culinary culture and seek to introduce it to people in other countries. 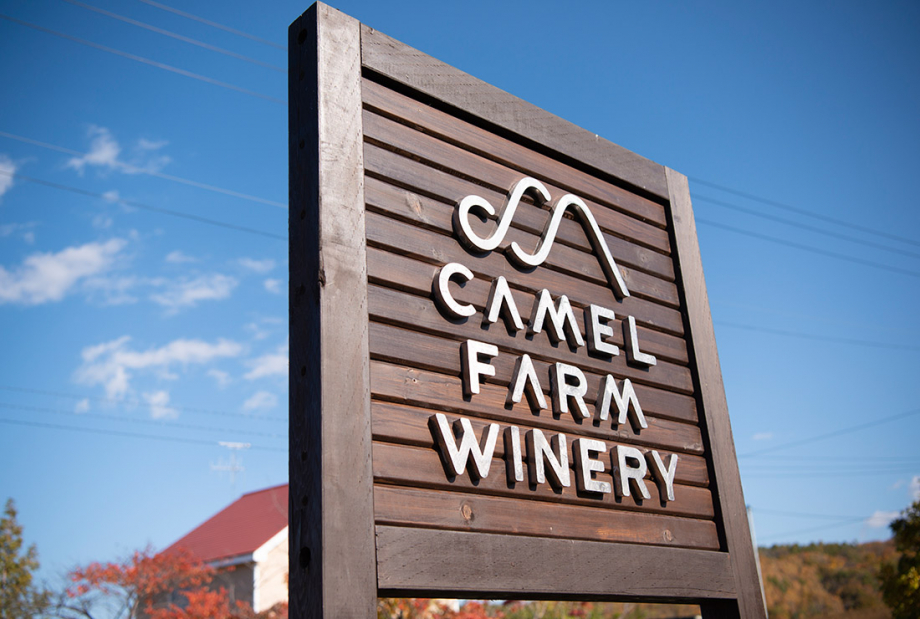 Riccardo Cotarella, a leading oenologist who is interested in the distinctive characteristics of different terroirs, is also a committed supporter of winemakers and environmental protection. Chairman of both Assoenologi in Italy and the International Union of Oenologists, he says he found common ground with representatives from the Camel Coffee Group, who wanted to develop world-class wines while contributing to the revitalization of the community. The Camel Farm Winery project was launched with the benefit of his cooperation. “I was drawn by the friendliness and passion of these people,” Cotarella says. 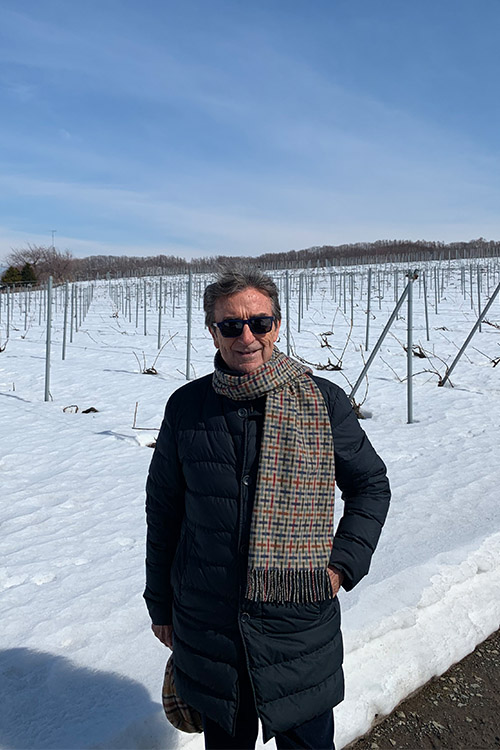 The site they chose to set up the new winery was Yoichi. At 43 degrees north latitude, with summer temperatures averaging 20 degrees Celsius, the area might seem an unlikely candidate for grape growing. But when Cotarella saw the vineyard of Takeshi Fujimoto, “I knew this was the place,” he says. “I liked the challenge of making wine in such an extreme climate. There was no way to predict the outcome.” 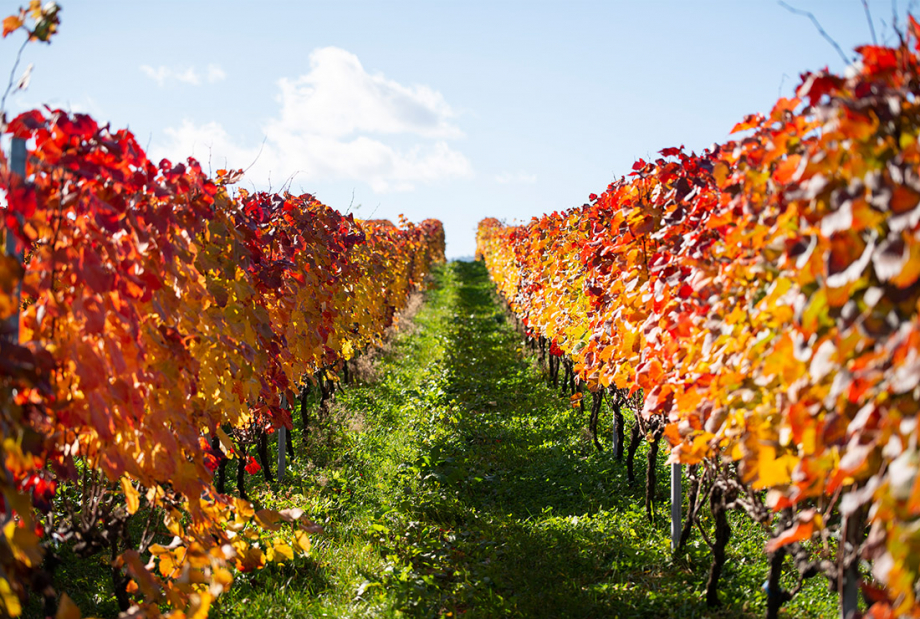 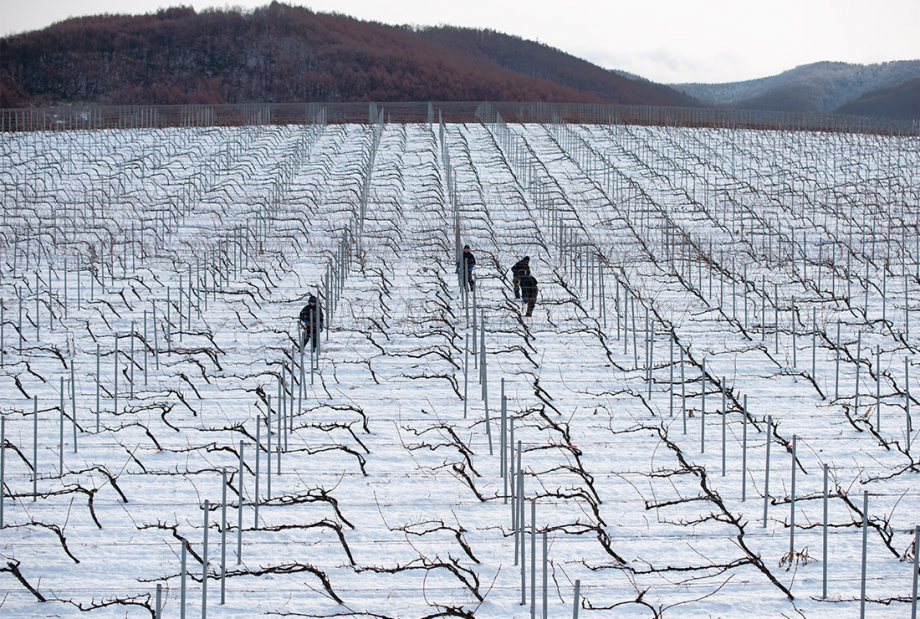 The final task of the year is pruning the vines. Workers toil in the snow to determine how the vines will grow in the next season.

Japanese farmers generally take good care of their fields, Cotarella adds, but he could feel “a special devotion to the grapes in Mr. Fujimoto’s vineyard.” This was perhaps to be expected, since Fujimoto was renowned as a pioneer of grape cultivation in Yoichi. Forty years on from converting his apple orchard to grapevines, he was contemplating future options when Camel Farm Winery made its fortuitous offer to take over the vineyard in 2014. 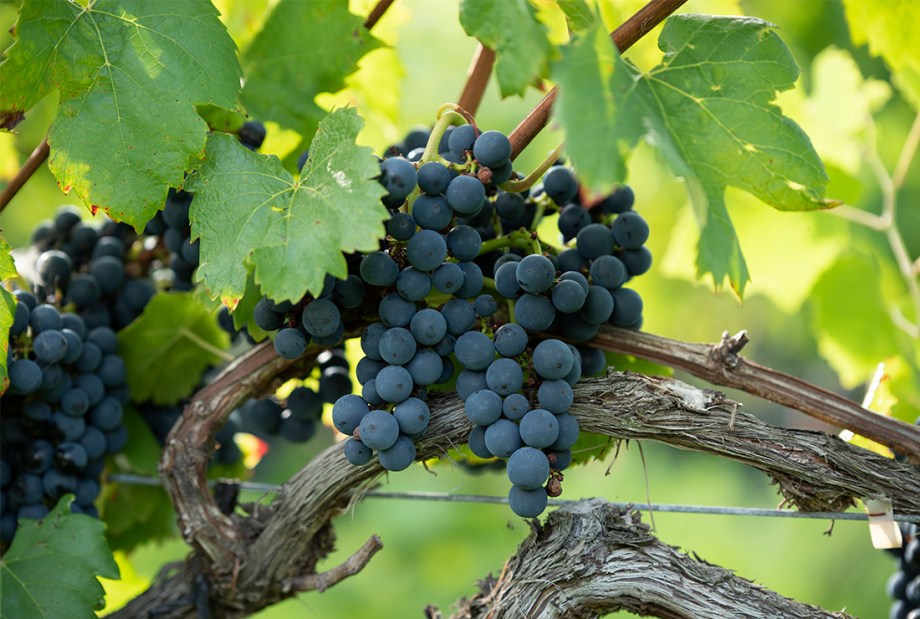 The winery’s oldest vines were planted over 40 years ago.

The winery’s current manager, Ai Ito, arrived in Yoichi in the spring of that year with no previous experience in farming, let alone vineyard management—and Fujimoto was a man of very few words. For the first year Ito simply followed him around, observing and imitating, as he went about his work. She studied how to choose which branches to prune, use shears properly, and prepare the soil, feeling all the while that she “didn’t have a clue.” So she was overjoyed when Fujimoto praised the winery’s first vintage as a fine expression of the qualities of the Kerner grapes from which it was made. “What we inherited wasn’t just Mr. Fujimoto’s vineyard,” Ito says. “It was also his dream of one day making wine purely from his own grapes. Without him, none of this would have been possible.” 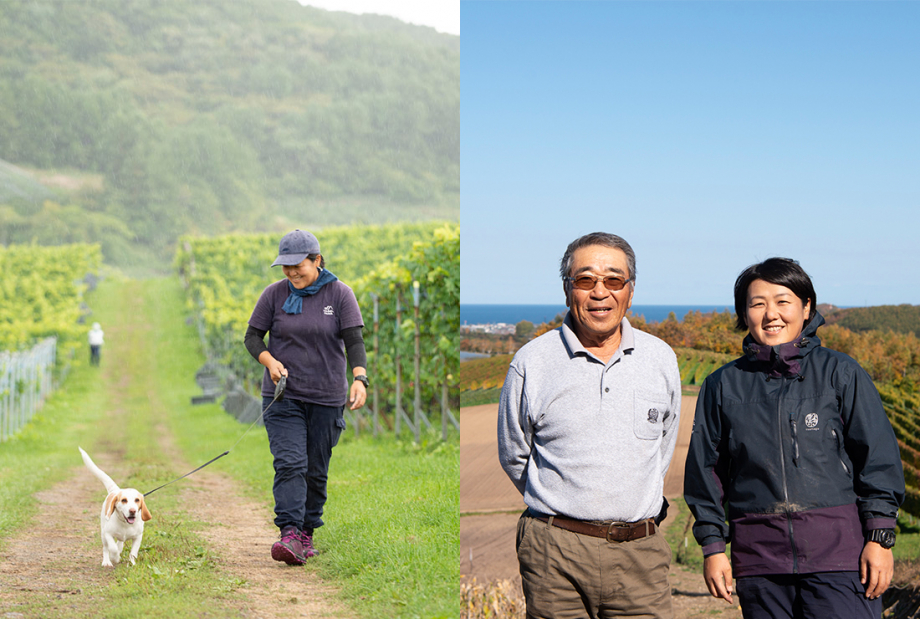 Left: Ai Ito with guard dog Unita on an early morning inspection of the vineyards. Right: Takeshi Fujimoto and Ito.

Camel Farm Winery
0120-934-210 (toll-free in Japan only)
camelfarm.co.jp
camelfarm@kaldi.co.jp
Not open to visitors