Fukuoka, a major city in Kyushu located in southern Japan, is a heaven on earth for food lovers, known for beloved dishes such as ramen and motsu nabe (hot pot with beef or pork tripe and other entrails) as well as its fresh seafood. It is no surprise that Kunihito Yasui, the producer of an international fashion brand Black Ships, chose Fukuoka as a place to host a very special two-day lunch event this November.

Reflecting Yasui’s passion to make his home Kyushu more vibrant and to discover unknown local talents, the event featured a team of talented chef, patissier and bartender aged under 40, as well as French brands and creators of various Kyushu crafts such as furniture, Hakata-ori (traditional woven fabric) and Arita-yaki pottery. The theme color of the event was red, reflecting the passions of creators and artists who are striving to keep traditional arts alive. 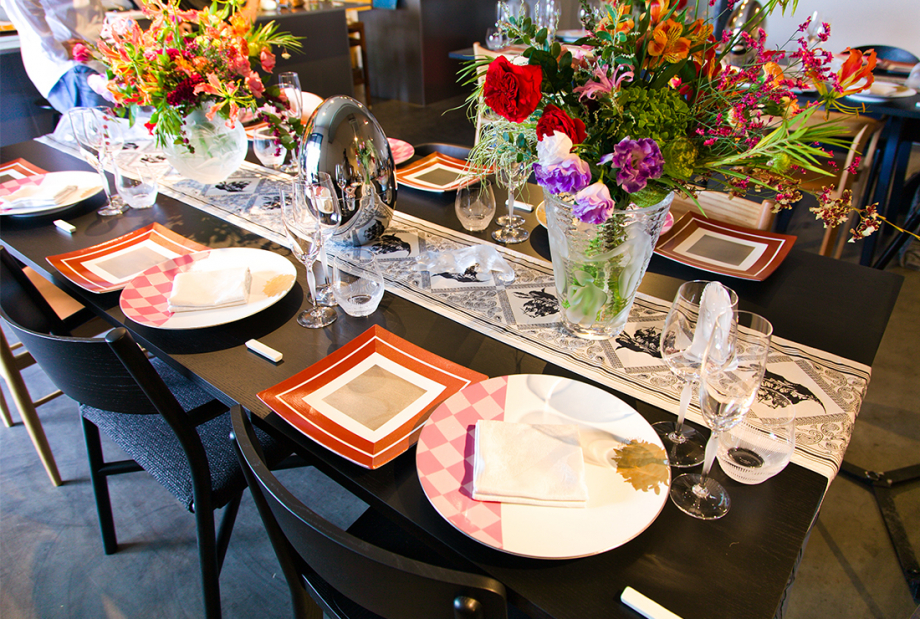 “Fashion, food and living cannot be separated,” said Yasui, who produces dining venues and other spaces using his perspectives on fashion. His views were well reflected in the Arita-yaki dish designed for the event— colored with two different shades of red, the plate design is filled with cultural and historical meanings. 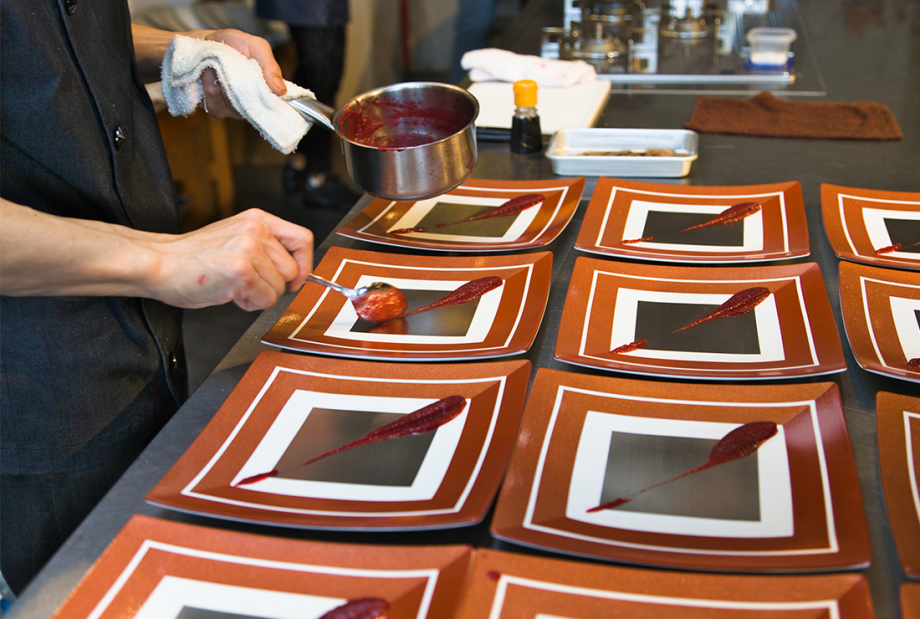 Dining tables colored with Japanese and French spirits
While the national flags of Japan and France both feature the color red, the shades are quite different. The red color on Japanese flag is vermilion―a traditional shade that has been used for shrine gates and such, while the red color on French flag represents the blood shed during the French Revolution.

In the middle of the plate where these two shades of red meet, the design features the color inspired by mercury which was traditionally used to make vermilion-colored paint, and silver, to represent France’s glory. Created with ideas and designs unique to fashion, the plate presents a new approach to traditional Arita-yaki craft. 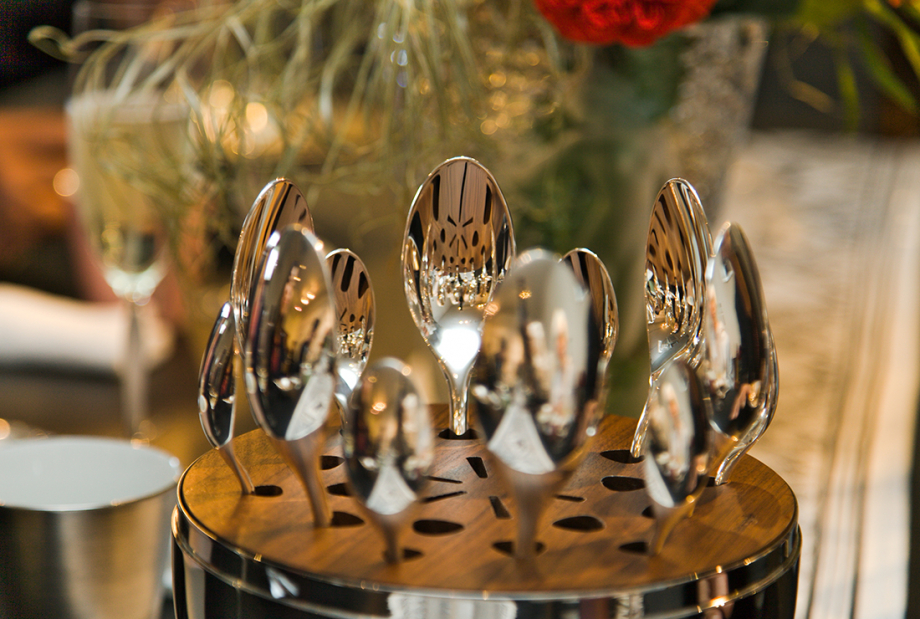 In addition to the Arita-yaki plates, the dining space was decorated with Hakata-ori table runners, cutleries by Christofle and sculptures by Lalique.

The plates were not the only special thing about this event. The 9-dish course with 12 drink pairings created by the young team amazed diners with every mouthful. Prepared with local harvests from Kyushu, Chef Yoshinori Yamaguchi successfully brought out the rich flavors of every ingredient.

Yamaguchi, the owner of Fukuoka-based bistro “Galinette” who trained for 5 years at Michelin-starred establishments in Paris and southern France, carefully selected the local ingredients for this special course. Starting with dried mullet roe from Miyazaki prefecture on bruschetta, mie cuit mackerel from Tsushima was served, followed by deep-fried fan lobsters wrapped in crispy kadaif noodles with a side of porcini mushrooms and pig’s feet ravioli with sauce.

The main dish was chou farci filled with Imari beef fillets, a high-class branded beef grown locally. The soft, smooth texture of the fillet was matched with its robust juice and truffle sauce flavored with Koimari Shuzo’s junmai-daiginjyo (high-grade rice sake) made in the same town. “Japanese people eat meat with rice, right?” chuckled Chef Yamaguchi. Indeed, it was a match made in heaven. 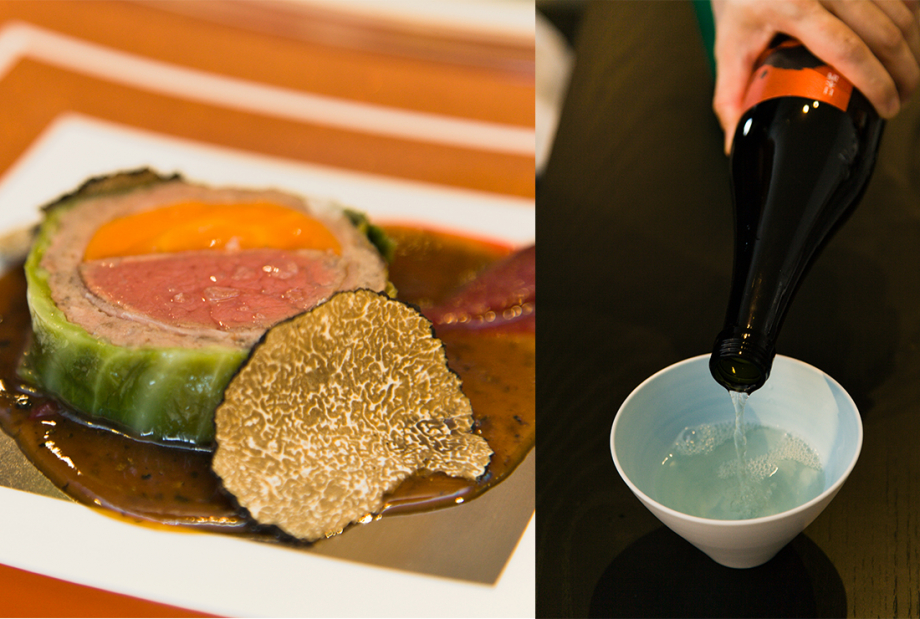 Farci – meaning “stuffed” in French – is a traditional French dish. It was paired with sake heated to a lukewarm temperature.

Finishing off the course was a plate of colorful desserts created by Patissier Notomi who trained under Pierre Hermé and other well-known pastry chefs. Using an original blend of tea leaves picked in Hoshino village in Yame, Fukuoka, Notomi packed in all the rich flavors of green tea in his matcha cream and sencha mousse dessert. The dish was showered with yuzu smoke right in front of the diners’ eyes just before being served, creating an appetizing waft of refreshing yuzu that made the diners’ mouth water after a full-course meal. 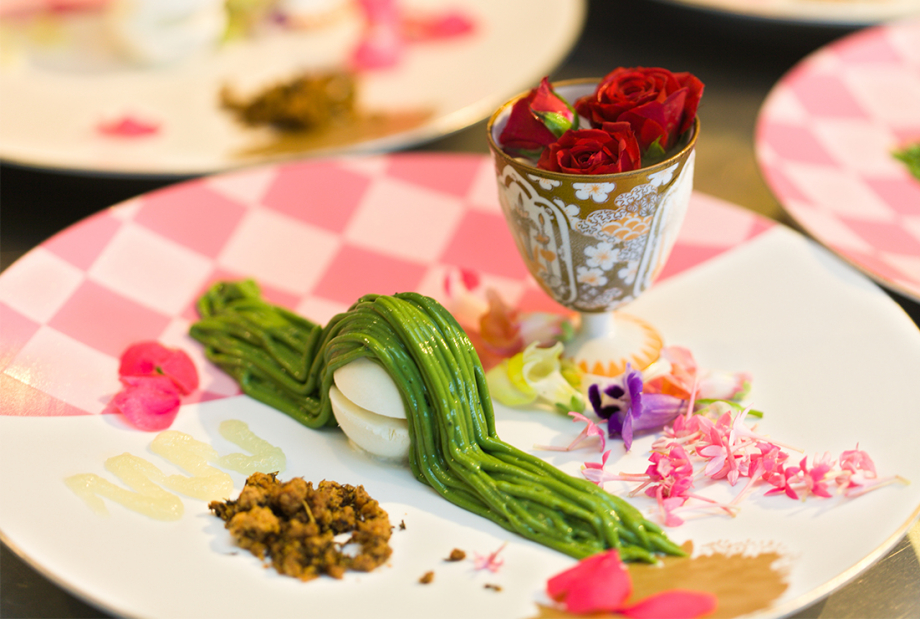 Arita-yaki makers and Yasui shared ideas to create the plate “Marie Antoinette’s Room”, used to serve desserts at the event.

High hopes for the creator who support traditional crafts
Born out of passions to keep traditional crafts alive, Yasui and his collaborators successfully created a dreamlike dining space and experience that helped the guests rediscover the allures of the Kyushu region.

“Like Kyushu, there are many areas with hidden gems that are not well communicated to the public,” said Yasui. “I want to convey these potentials and create something that excites us.” Yasui’s series of unique works is a must-watch for all food, art and fashion lovers. 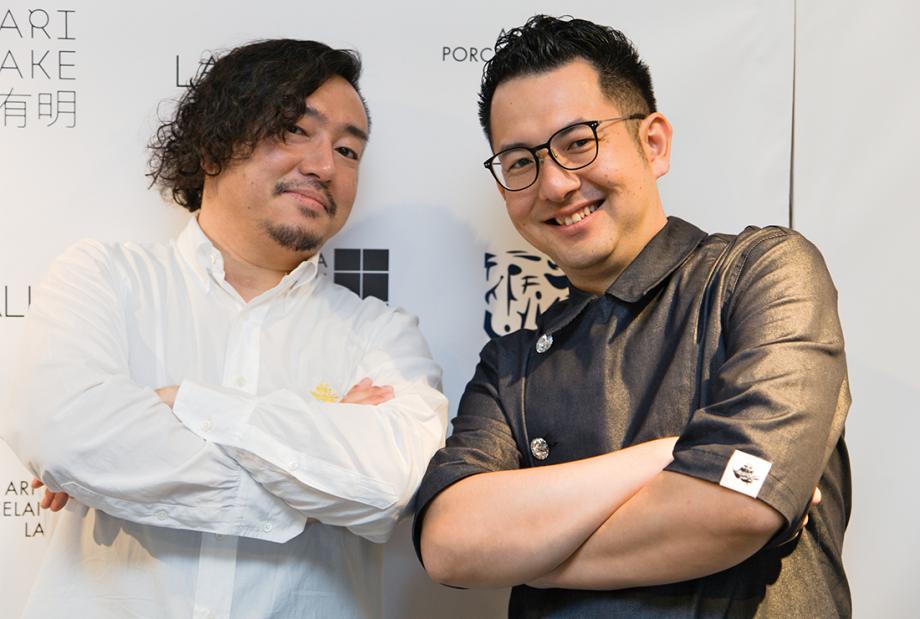 Left: Kunihito Yasui, the organizer of the event. Right: Daisuke Notomi, a patissier who trained in France for over 18 years under Pierre Hermé and Olivier Bajard, a recipient of Meilleur Ouvrier de France.

TEAM FRONTIER BY Black Ships
The next event is scheduled around November.
For more details, please contact: online@blackships.co.jp