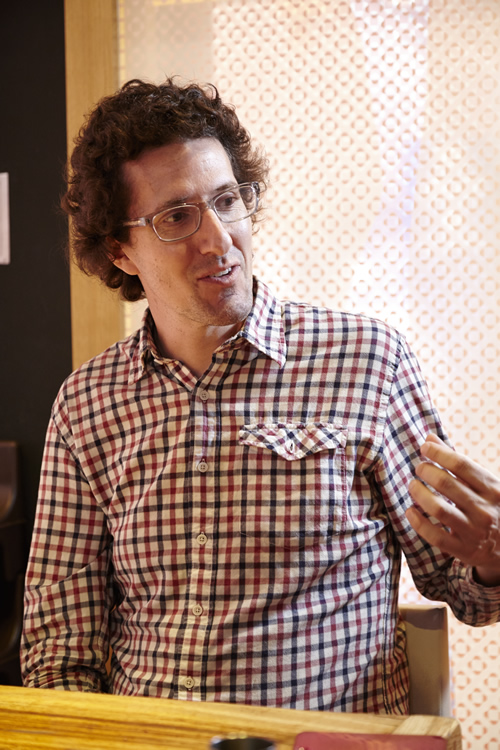 San Francisco native MacDuckston majored in computer science at UCLA. After a stint as a programmer, he traveled to Japan, where he worked as an English teacher and fell in love with ramen. He maintains the Ramen Adventures blog at www .ramenadventures.com. 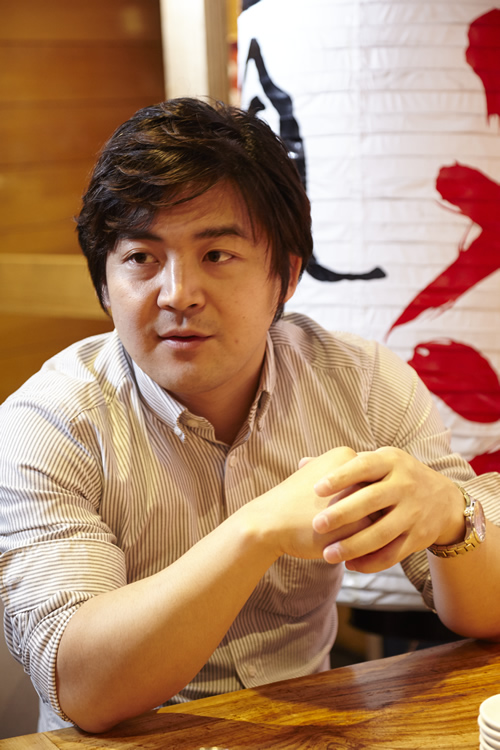 Ishiyama, who has sampled ramen at more than 6,000 shops, often writes about ramen for magazines, and penned The Ramen Book, published by Jitsugyo no Nihon Sha. He serves as a consultant to ramen shops, and created his own line of instant ramen noodles.

Brian MacDuckston: The first ramen I got hooked on was tonkotsu ramen. I had just arrived in Tokyo, and since I had some time on my hands, I went into a ramen shop where there was a line out the door. In the States, I had only ever eaten instant ramen. The creamy soup and chewy noodles of tonkotsu ramen were a completely new experience for me.

Hayato Ishiyama: Me, too! In Aomori prefecture, where I come from, the only ramen around was shoyu ramen. When I moved to Tokyo, tonkotsu ramen had gotten really popular, and the first place I happened to eat it was an Ie-kei tonkotsu shoyu ramen shop [see page 86, bottom right]. I’d never encountered ramen that tasted like that before, and I was totally floored.

BM: Lately I’ve been into distinctive preparations of shoyu ramen or tsukemen. But I do start to crave rich tonkotsu ramen when I haven’t had any for a while.

HI: I think it's funny how this whole ramen popularity thing is a relatively recent phenomenon. I mean, ramen in niboshi broth is a well-established genre in Tokyo now, but seafood- based broths only came to the fore in 1998 or so, and niboshi ramen didn’t start to appear until around 2007. There are currently several types of what started out as a regional specialty—I never thought the competition in niboshi ramen would get so hot. I suppose we’ll start seeing it overseas pretty soon, too. The same thing happened with tonkotsu ramen. What started out as a local Kyushu specialty took Tokyo by storm and then got huge overseas. Today, we’re eating at Ippudo [famous for tonkotsu ramen], whose New York storefronts are also wildly popular.

BM: At Ippudo in New York’s East Village, patrons are greeted by a host or hostess, and there’s even a waiting area. People actually make reservations to go and eat ramen.

HI: I remember Ippudo’s staff uniforms were created by a fashion designer—everyone was talking about it. Washoku was added to the UNESCO Intangible Cultural Heritage list in 2013, which means that Japanese cuisine— including ramen—is only going to get more popular from here on out. Ramen really has a bright future!

BM: On the other hand, I don’t think people in the U.S. are very familiar with varieties of ramen other than tonkotsu. Some people even equate shoyu ramen with the taste of instant noodles. When I take non-Japanese visitors on tours of ramen shops in Japan, I introduce them to places that serve different types, and everybody is always really surprised at just how tasty shoyu ramen is. But a lot of people dislike strong-smelling soup, so some kinds of tonkotsu ramen are out for them. I once tried to take some visitors to a tonkotsu ramen place just for a smell test, but even from 500 meters away, they stopped dead in their tracks and wouldn’t go any closer.

HI: What about niboshi ramen?

BM: Well, non-Japanese find that hard to stomach, too. Just hearing that it’s a fish-based broth can be enough to turn them off. I think it’s because they imagine it having a fishy smell. I try to tell them that no, it’s not like that, but it’s a hard sell.

HI: What a shame! Niboshi ramen is so good.

BM: You know, ramen is a simple dish, but at the same time it’s really profound. People might not have any idea what they’re eating when they’re served an elegant kaiseki meal. It’s the same thing with sushi: What’s that fish on top? But with ramen, it’s another story. It’s noodles, soup, and toppings, and you can usually tell what it is you’re having. That’s what makes ramen so appealing.

HI: Yeah, I agree. The ingredients aren’t too hard to identify. It’s easy to compare various types of ramen, too. And right now, ramen averages about ¥700 to ¥800 a bowl, so it’s an inexpensive meal that everybody, from students to seniors, can afford.

BM: It’s accessible, too. It seems like ramen shops are everywhere!

HI: I’ve heard that a new one opens every day. My mission is to scout out those places and tell people about them. There are more than 30,000 ramen restaurants in the whole country, but Tokyo is clearly the winner when it comes to the sheer number of shops.

BM: I love exploring ramen joints in areas outside Tokyo, too. But there’s not as much variety out there, and getting to those places isn’t as easy, either.

HI: When I travel outside Tokyo for work, I’ll often hit eight ramen shops in a day, but it loses its appeal when all the ramen tastes pretty much the same. That’s why places like Tokyo Station’s Ramen Street or the Shin-Yokohama Raumen Museum food amusement park are great options for foreign visitors who want to sample different types of ramen.

BM: If you want to try out a new place, the best way to find a good one is to ask a local for a recommendation. Of course, everybody’s palate is different, so their favorite place might not appeal to you, but most Japanese have a go-to ramen shop.

HI: Everybody has their own favorite; but also, shops that have been in business for 10 years or more usually make great ramen. Unfortunately, there’s so much turnover nowadays, it’s hard to find a shop that’s lasted that long.

BM: True. So, Hayato, tell me about the great ramen places you’ve been to lately … 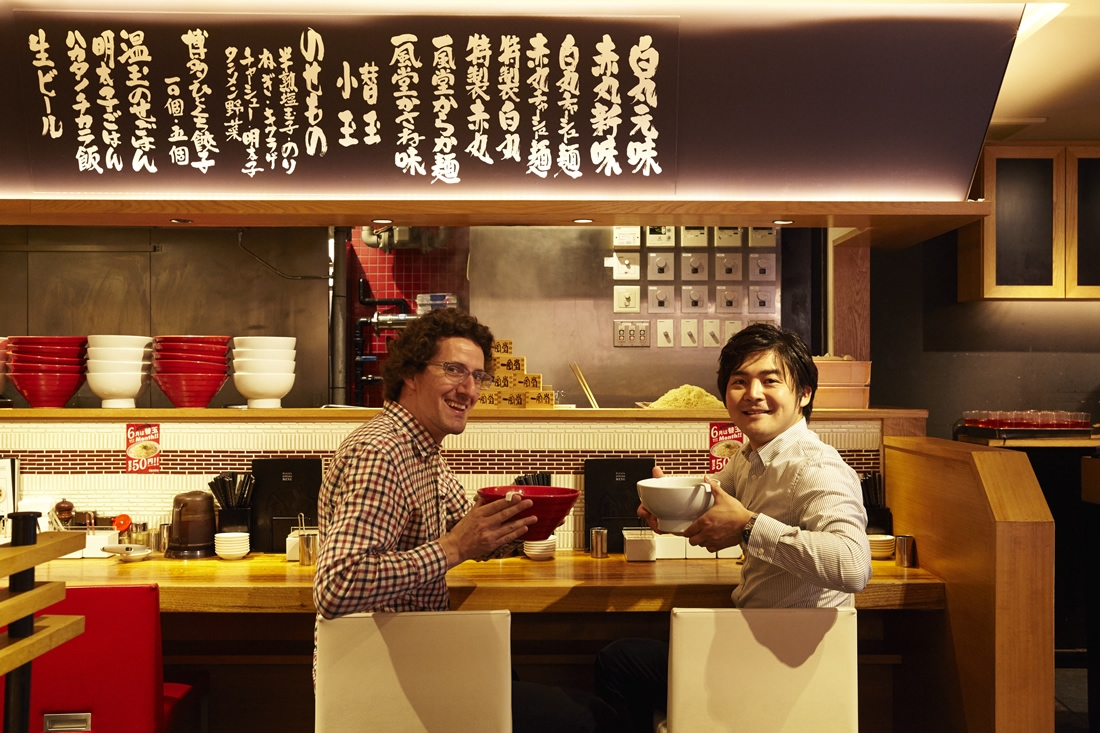