Before our first meeting, Nobuhiro Sakanishi had just returned from a lengthy trip to Italy. For five consecutive years, he has traveled to the Amalfi Coast, Venice, Verona, Milan, Turin and Florence—the latter his declared favorite.

Standing inside Kikuhide—his favorite knife shop in Hakata, Fukuoka—against a colorful backdrop of handcrafted knives, Sakanishi and I chat about the striking simplicity of Tuscan dishes, lingering on our shared aged cheese obsession. 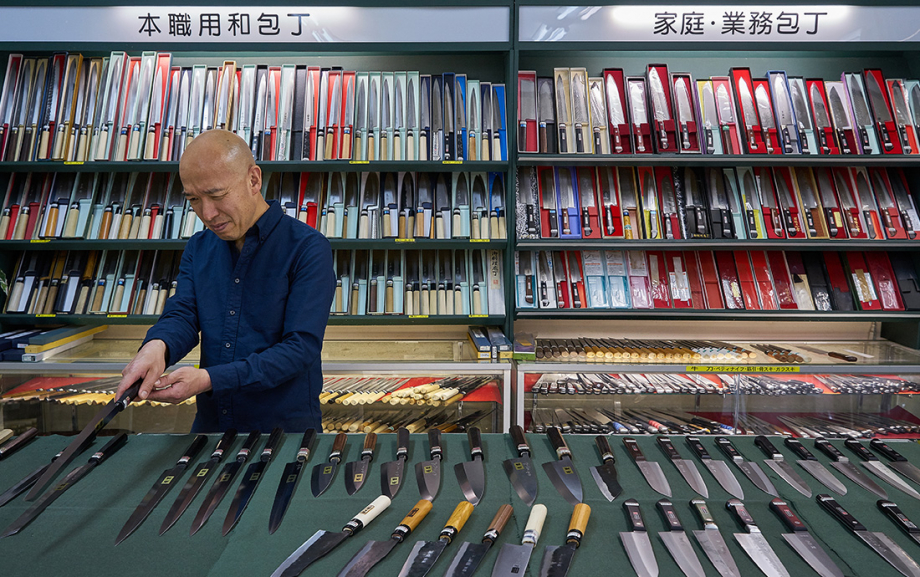 Sakanishi at the Kikuhide knife shop in Fukuoka.

With each excursion abroad, Sakanishi allows himself the opportunity to appreciate how small he is in the context of the world at large; the adventure of discovering another culture forces him to grow outside his comfort zone—Japan—and to subsequently grow as a person, he professes. The central role that food plays in Italian life, and the significance that Italians place on family, align with Sakanishi’s own identity—right down to the special bond often shared between Italian men and their mothers. “I have a mother complex, like Italian men do,” he laughs. 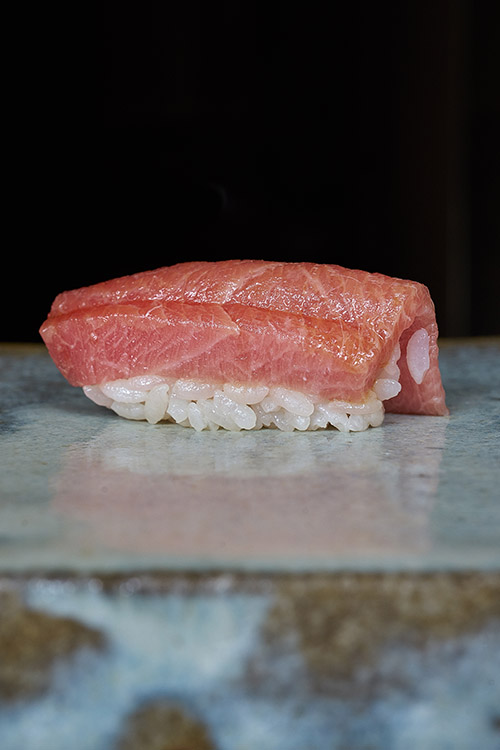 The youngest of four children, Sakanishi’s professional path was largely influenced by his uncle, a sushi shokunin with whom he apprenticed for eighteen months after high school. He then went on to work at Kawasho, a legendary sushi restaurant in Fukuoka, for exactly twelve years and eight months, he says.

At Kawasho, Sakanishi learned how to prepare Kyushumae (Kyushu style) sushi, which commonly employs more fresh fish rather than aged, preserved or simmered neta (toppings). However, his culinary approach at Chikamatsu does also incorporate Edomae (Edo style) techniques. “Japan is blessed with ingredients, especially fresh fish in Fukuoka,” he remarks. “Sushi is fish plus shari (seasoned rice) plus wasabi. It is made with one’s hands. It is simple, but very difficult because it’s so simple.” 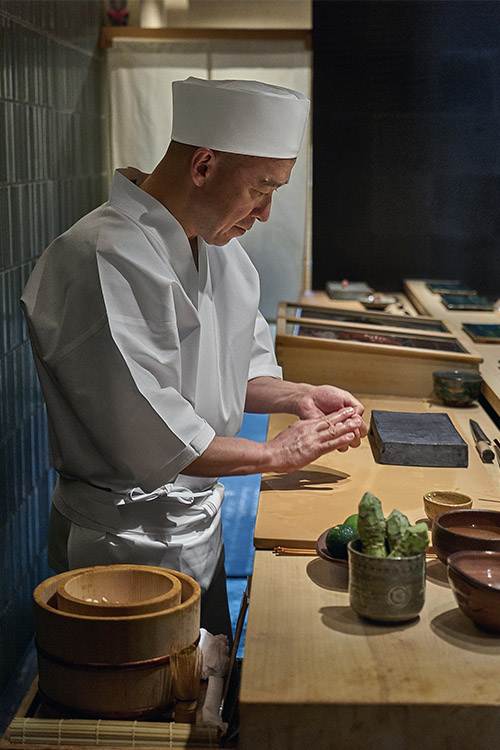 Every day, Sakanishi searches for that 100% perfect fish for his clients, claiming to have found an “ideal” few over the course of his career. “When a fish is in season and just about to lay eggs, it eats a lot and becomes fat and rotund,” he explains. “The look of the fish determines perfection.” Meanwhile, for his shari, Sakanishi uses a well-known brand of rice, Akita Komachi, that ages the grain for one year. This maturation process induces cracks in the grains that soak up the vinegar, ensuring maximum flavor. 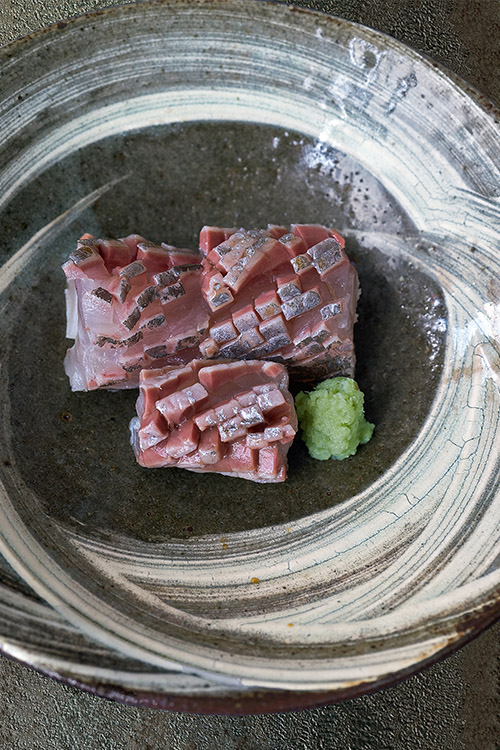 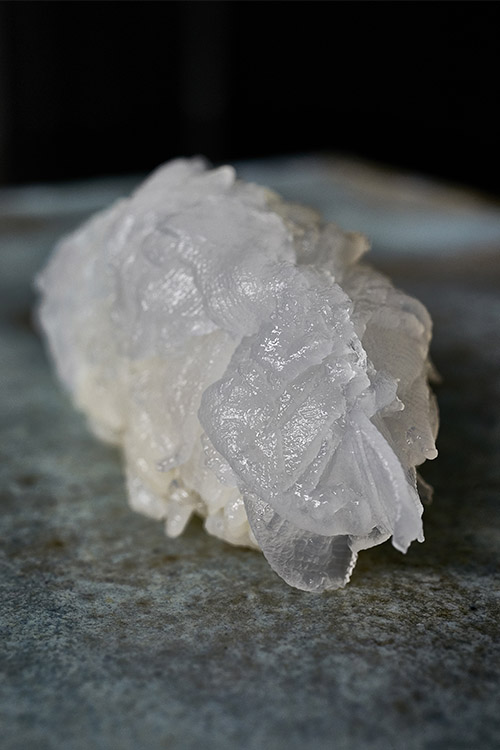 The meal at Chikamatsu begins with seven otsumami (appetizers), followed by twelve nigiri. A chasen (tea whisk) is used to prepare konowata no chawanmushi, a creamy, steamed egg custard with tiger pufferfish milt, grilled barracuda and grated yuzu peel; it is one of the standout appetizers. Three chunks of succulent aji (horse mackerel), with a dab of wasabi, are presented on a swirling brown, gray, and cream earthenware plate. 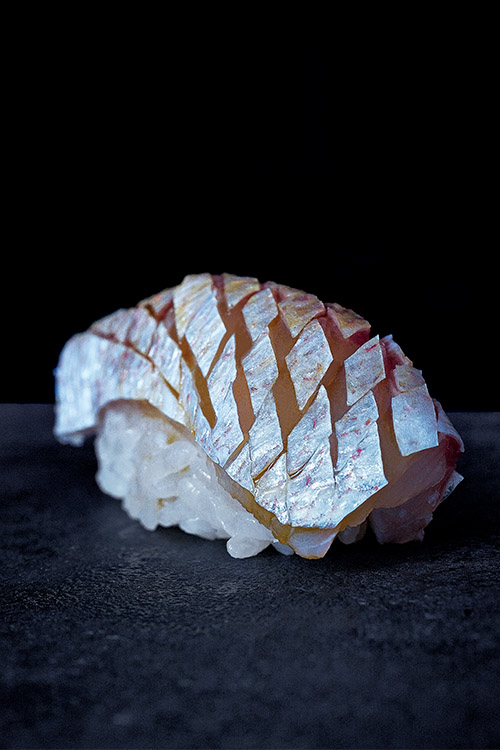 Transluscent aoriika (bigfin reef squid)—always the first nigiri—is placed before me on a robin egg blue-and-gray surface; it is then followed by kohada, (gizzard shad) on a thick, rectangular slab of black pottery. Chutoro (medium fatty tuna) then appears as the sixth nigiri. The sequence and progression of flavor—in essence, the creation of the Fifth Taste (savory umami)—echoes Sakanishi’s aforementioned love of aged Italian cheese. 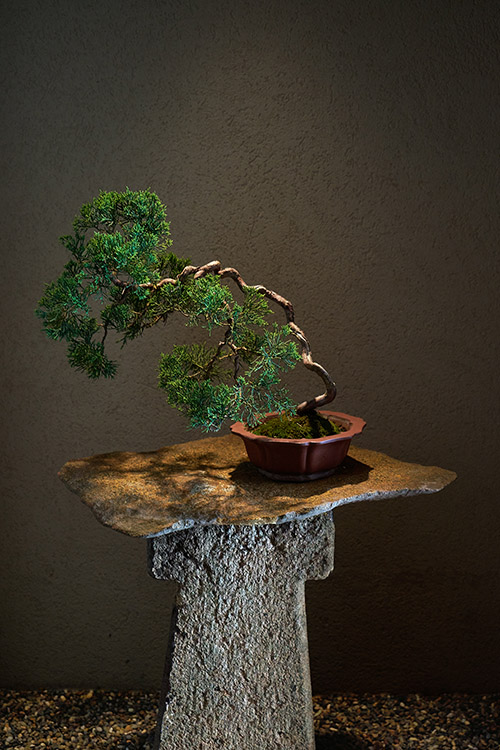 A bonsai in the entrance of Chikamatsu.

The team at Chikamatsu consists of Sakanishi’s wife and twenty-six-year-old son, Takeshi, who trained at culinary school and will likely take over the business one day. Sakanishi has already realized his dream of becoming the CEO of his own company—Chikamatsu, of course—and stresses the importance of customer service. He also admits that he has a penchant for compulsivity—not only when it comes to his technique, but also with client relationships. Should he ever retire from his life as a sushi shokunin, a somewhat implausible notion, he says he would gladly become a monk at a temple. “I like to listen to people, to help them, if they are encountering a problem,” he says in a hushed tone. 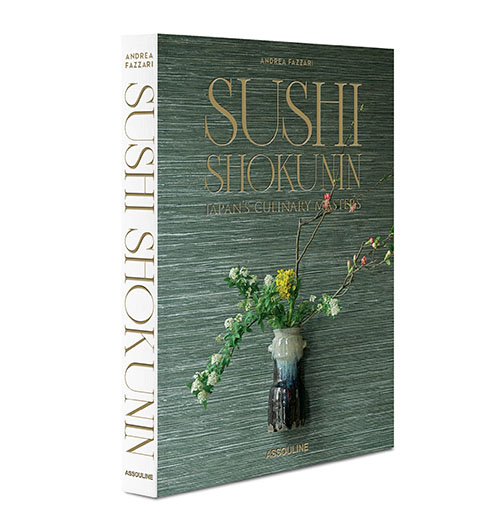