Hayama, a coastal town on the northwest corner of the Miura Peninsula in Kanagawa prefecture, boasts a mild climate that has led to a proliferation of health resorts and luxurious weekend homes in the area. Yet it is also a place that draws people to a more old-fashioned, natural way of life close to both hills and sea. We meet two remarkable women who have found a tranquil refuge for body and soul in the bountiful environs of Hayama. 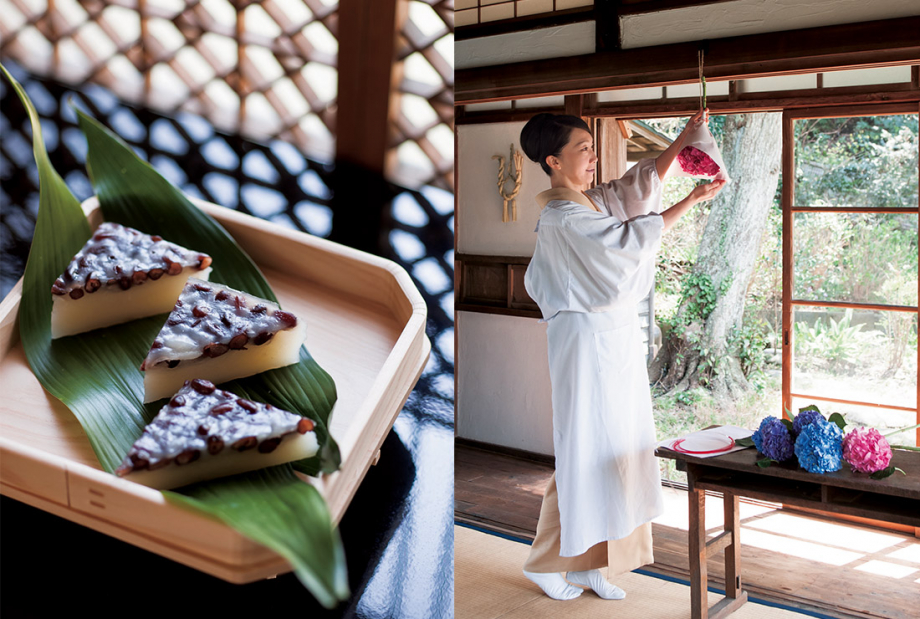 Left: From the historic Japanese confectioner Eirakuya in Hayama, these minazuki cakes are named for the sixth month of the year in the old Japanese calendar. They are intended to ward off evil and bring good luck. Right: Hirota hangs a hydrangea talisman from a beam near a doorway in her home. She does this every year during the rainy season to express her prayers for the good health of her family.

Here, my heart turns to the things my eyes can’t see; it’s a place where I can feel things that have no form.
――Chieko Hirota

Sitting on the veranda, looking over the garden, we hear the sounds of the sea drifting on the wind from afar. The scent of wet vegetation and wet soil, freshly moistened by the rain that ceased only a short time ago, permeates the air. Rain falling on the hills trickles into streams and runs down to the ocean, where it evaporates to form clouds that bring new rain. Each of these very ordinary steps is part of a natural cycle that’s too easily forgotten. Living on this hill just 10 minutes’ walk from the sea, Hirota experiences life with all her senses. Her decision to live in Hayama was triggered by a scene she witnessed during a visit 25 years ago. “It was a cloudy day, but for just a moment a gap opened in the clouds and the sun shone through like a spotlight onto the sea,” she recalls. “That spectacle—people call it Jacob’s ladder—was sublime. I’ll never forget how its beauty just took my breath away. ” 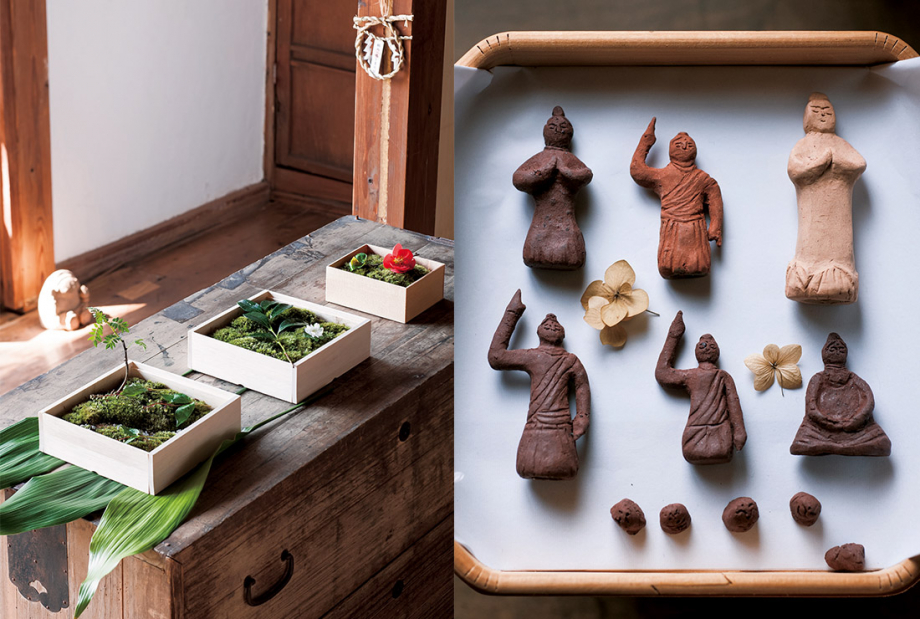 Left: Soil and moss are laid out in small wooden boxes to create miniature gardens. Like flower arrangements, they reflect the changing seasons. “As I’m making them, I conduct a dialogue with my inner self,” Hirota says. Right: Hirota sculpted these miniature Buddhas from materials gathered in the hills where she lives.

Since making her home in Hayama, Hirota has found she lives with an awareness of things that are intangible yet extremely important. “I decorate with the colors of the season, and I eat foods that are in season. I respect seasonal events and customs. Before I came here, I had forgotten many things that were common practice in Japan from ancient times. I began to want to learn more about saijiki—and I’m still learning now. There’s so much to it! I’ll never be finished,” she says. 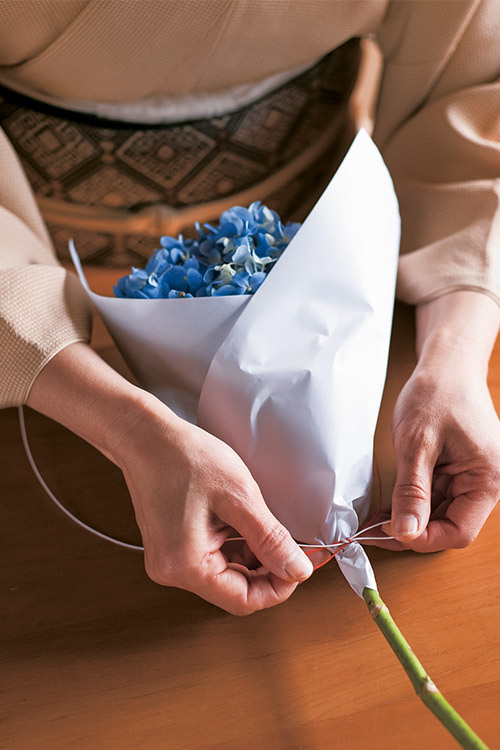 The hydrangea symbolizes the rainy season preceding Japan’s steamy summer. To make a hydrangea talisman, visualize your wish as you write your name and birthdate on a piece of paper. Tie the paper around the base of a hydrangea blossom and wrap a sheet of calligraphy paper around both, securing it with a paper string.

Hirota works in a standalone studio named Akiyashiki (Four Seasons of Akiya) near her house. All around her is food for study, from her veranda with its sea view to the imposing camphor tree, the mossy garden, and the plants that thrive in each season throughout the year. “When I arrange flowers, I not only cherish their beauty, but also absorb some of the strength that resides in each and every plant. I focus my feelings toward the life of the plants. I observe them intensely, tend them from time to time, and put my senses to work to discover the subtlest things in them. Some aspects may not be visible or tangible. But my aim is to engage all my senses deeply with the entirety of nature that surrounds me, and to delve into the ancient Japanese concept of wa, or harmony, and the rich poetic language of saijiki as it applies to me here.” 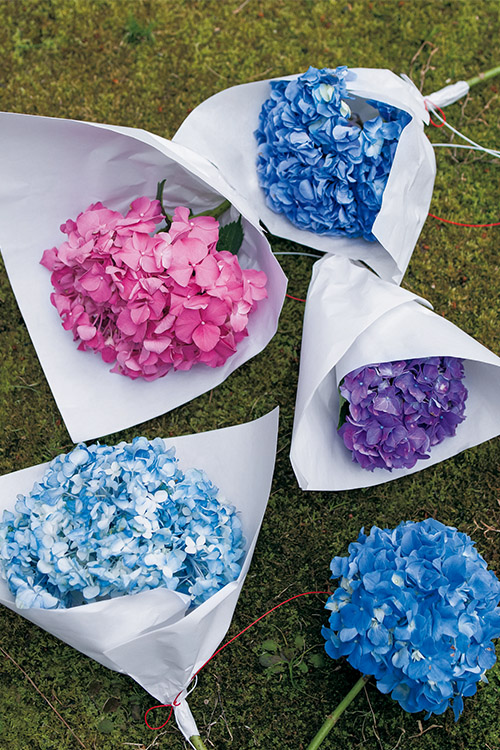 Hang the hydrangea from the eaves or at the entrance of your home. This generally represents a wish for luck with money, business, social success, or good health.

Chieko Hirota
Hirota studies Japanese culture, especially saijiki, the traditional poetic language associated with the seasons. Working from an atelier near her home, she pursues a deeper understanding of seasonal language and the traditional cultural calendar through her everyday life. She has published many books as well as newspaper and magazine articles. 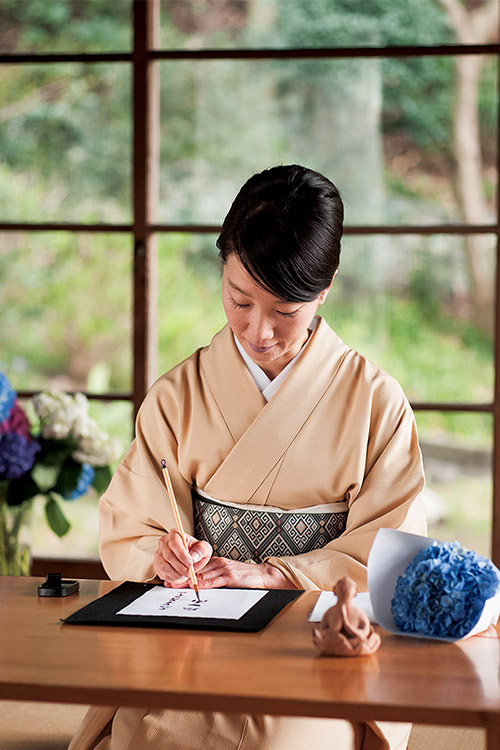 This article is an excerpt from Kateigaho International Japan Edition 2019 Spring/Summer.