Situated on the south coast of Shikoku, the smallest of Japan’s main islands, Kochi prefecture is becoming known throughout the world as a producer of top-quality flowers. Read on to learn how flowers, long a prominent part of Japanese culture, are putting Kochi’s name on the map.

Reaching out to the next generation

The Nationwide High School Hanaike Battle gives entrants in this ikebana competition only 5 minutes to complete their arrangements. Contestants are the picture of concentration as they work quickly to arrange large branches, bamboo, and colorful blossoms into well-balanced compositions suited to the vase or dish they have been assigned. By the end of the allotted time, they have created innovative works that are often taller than themselves. The competition demands improvisation; it also does not follow the prescriptions of any particular school of ikebana. 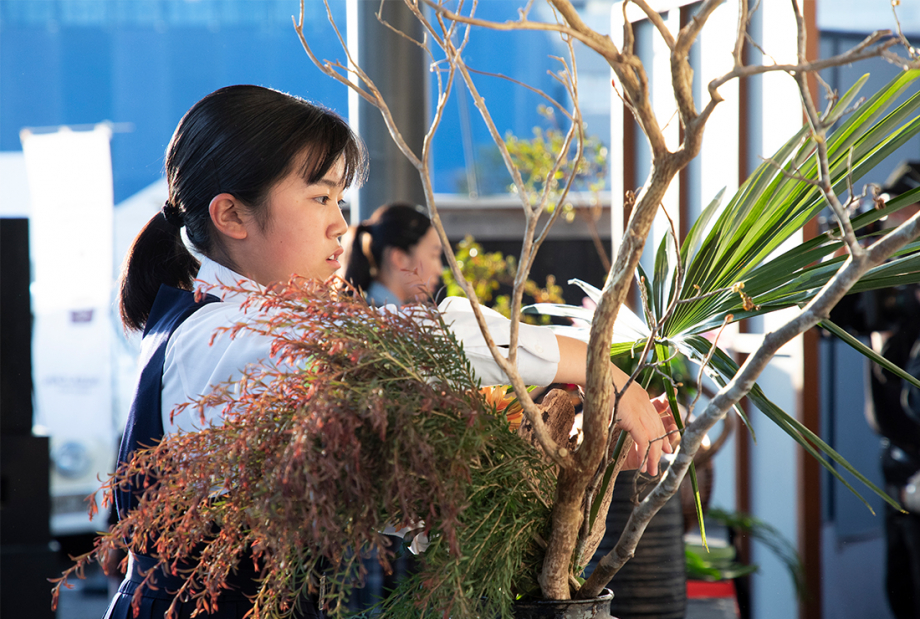 Team members work quickly, all the while keeping one eye on their rivals.

The Shikoku qualifying round for the contest took place in mid-November 2020 in the city of Kochi, the capital of cut-flower mecca Kochi prefecture. Held for the first time in Kochi, this round attracted 44 contestants paired in two-person teams. The venue was stocked with Easter lilies, lisianthuses, and other cut flowers provided by local growers. 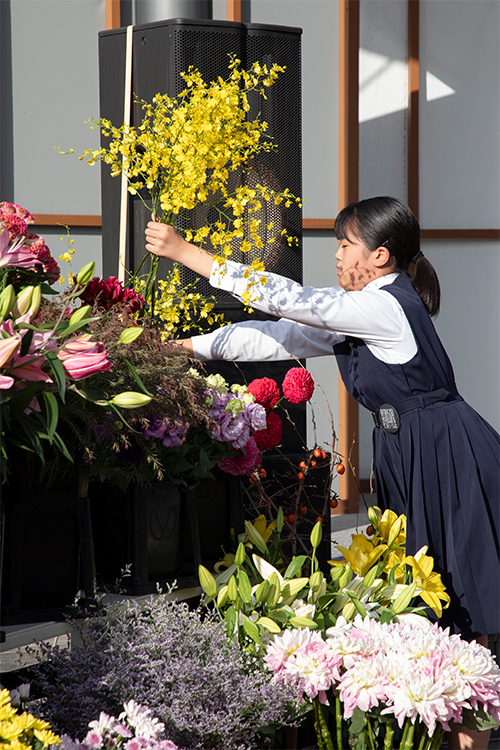 Local flower producers and Japan Agricultural Cooperatives Kochi provided nearly 90 types of arrangement materials, stacked by the side of the stage. Contestants chose from this assortment as they liked.

Three teams worked simultaneously on their arrangements in the qualifying round, with two teams competing at the same time in the semifinals and finals. They were judged on such elements as composition, teamwork, and comportment. At the end of the qualifying, semifinal, and final rounds, only one team went on to the national competition. 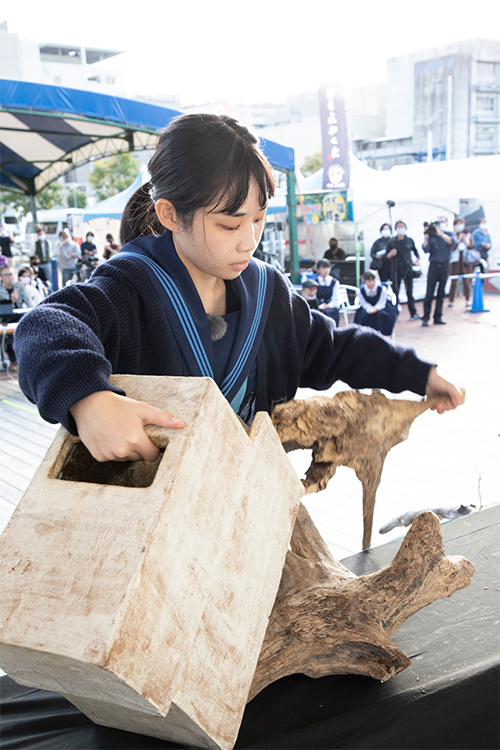 Contestants make imaginative use of driftwood and other materials in their arrangements.

Contestants raced against the clock while jaunty background music and the emcee’s play-by-play account of the action added to the feverish mood, just like a sports meet. In the words of Yuichiro Hinata, head of competition organizer Hanaike Japan Project, the event aims to promote contemporary, creative ways of arranging flowers that defy the perception of ikebana as a stodgy, strict tradition. 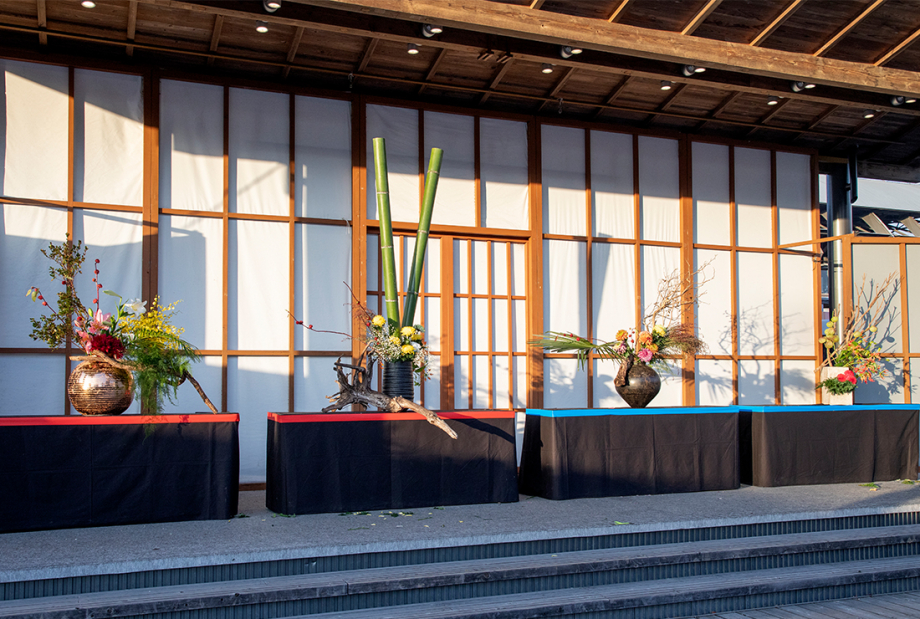 The two works on the left were the competition winners and the two on the right, by Kochi students, were the runners-up.

Many of the Kochi entrants were relatively new to flower arranging, and a few wore anxious expressions as they worked. Yet two Kochi girls who had only started ikebana six months earlier made it to the finals, despite the stiff competition from other Shikoku prefectures. Their arrangements, composed around locally grown gloriosas and dahlias, seemed to exude a quiet pride. Smiling happily, the girls said that while they had not given flowers much thought before, they were enthralled by ikebana now and hoped to somehow incorporate flowers into their lives from now on. Their future as practitioners of ikebana would seem bright indeed. 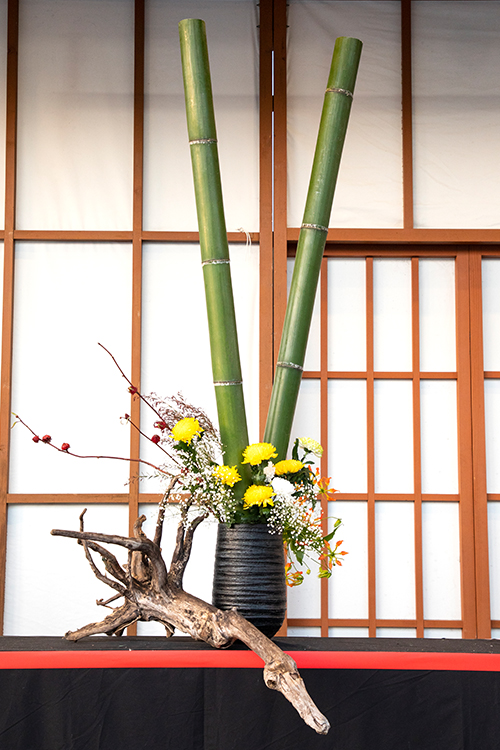 This dynamic work featuring two large stalks of bamboo earned the top score in the final round. 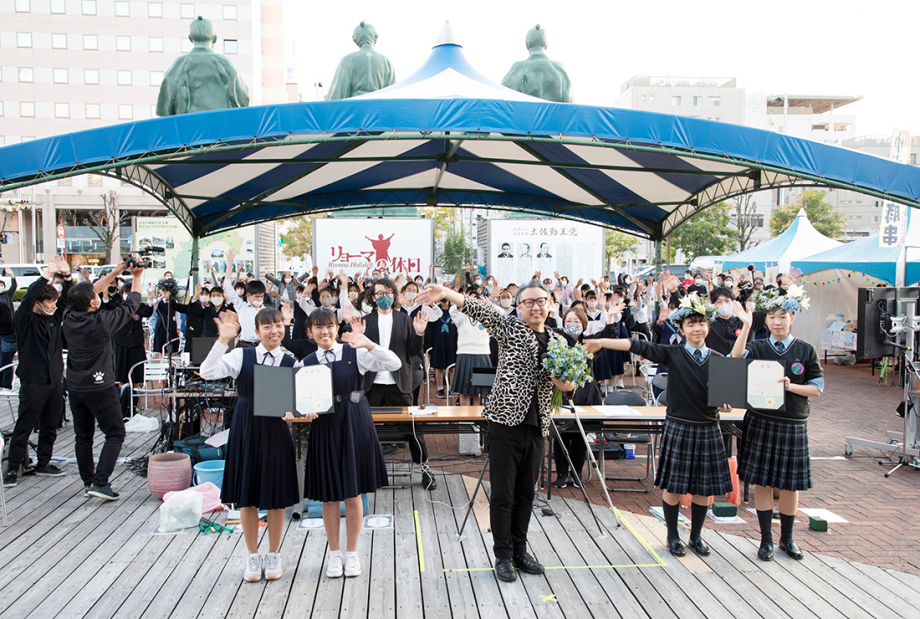 The Shikoku qualifying round was held in the plaza in front of Kochi Station. At the center is competition organizer and emcee Yuichiro Hinata, waving to the crowd.

Introducing some of the prefecture’s best-known varieties of cut flowers.

Tweedia
The uniquely azure-hued tweedia is grown in Kochi year-round in greenhouses in the village of Geisei, which lies between the Pacific Ocean to the south and a mountain range to the north. The most common variety, Pure Blue, has roundish pale-blue petals that make it popular in bouquets of bridal flowers. Producers are currently developing new pink and red varieties. 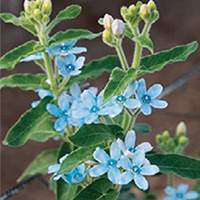 Gloriaosa
Kochi is Japan’s top producer of gloriosa, known for its distinctive shape and fiery colors. Southern Wind, pictured here, was developed through years of effort to produce a brilliant red color and thick, sturdy stems. Exported as a premium product, Kochi’s gloriosas are popular abroad. They are grown in greenhouses and available year-round. 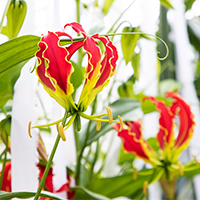 Dahlia
Colors, shapes, and sizes vary. Dahlias used to be highly perishable and difficult to keep at home, but more durable varieties have been developed lately. Harvesting occurs between October and June. 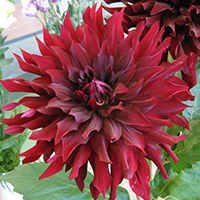 Lisianthus
Colors and shapes vary. Lisianthus thrives in the warm, sunny winters of Kochi’s coastal plain, but also grows well in cooler mountainous areas during the summer, so it is available year-round. 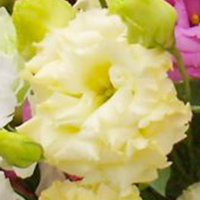 Easter lily
Cultivation of the Easter lily, a pure-white trumpet-shaped bloom, began in Kochi in the 1930s. It can be harvested year-round except in August. 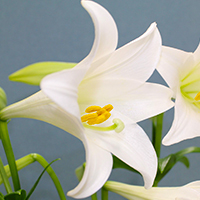 Epidendrum
Blooming in round clusters of small blossoms, epidendrum comes in such shades as orange, red, yellow, and pink. Most varieties in Kochi are available between November and May. 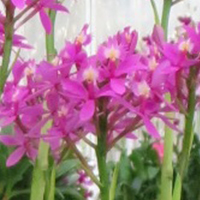 This article is an excerpt from Kateigaho International Japan Edition 2021 Spring/Summer.