It was in the mid-17th century that the founder of the Hirado Etsuzan kiln established the fine porcelain craft of Hirado Mikawachi ware, originated in the former Hirado domain of Nagasaki prefecture. This year in 2021, fourteenth-generation head Hitoshi Imamura has been designated an Intangible Cultural Heritage by Nagasaki prefecture for his Mikawachi ware crafting technique. Here is a glimpse into the beauty of his unparalleled art, a tradition inherited and refined throughout the ages. 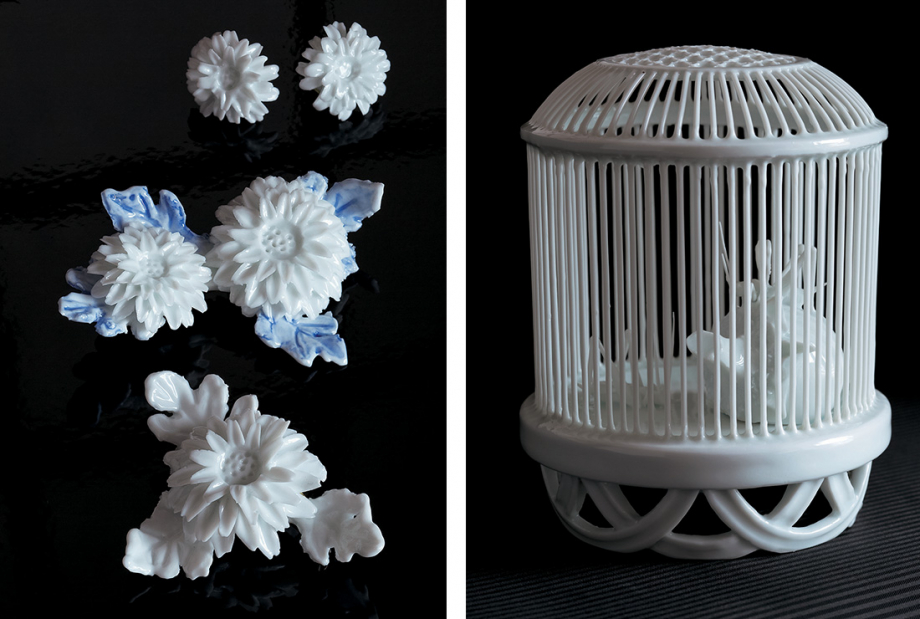 Left: Brooches and pierced earrings feature delicate chrysanthemum flowers. Right: An insect cage holds finely crafted bell crickets, one perched atop an eggplant.
Mikawachi, on the southern edge of Sasebo in Nagasaki prefecture, is home to the pottery known as Mikawachi ware. It traces its origins to a kiln established by Korean potter Ko Seki, who was brought to Japan at the end of the 16th century, after warlord Toyotomi Hideyoshi’s second campaign against Korea. The kiln originally produced earthenware pots, but the discovery of china clay—essential to producing fine white porcelain—in the area made highly refined wares possible. Designated the official purveyor to what was then called the Hirado domain, the kiln became known for its incomparably translucent whites and the consummate artistry of its designs. 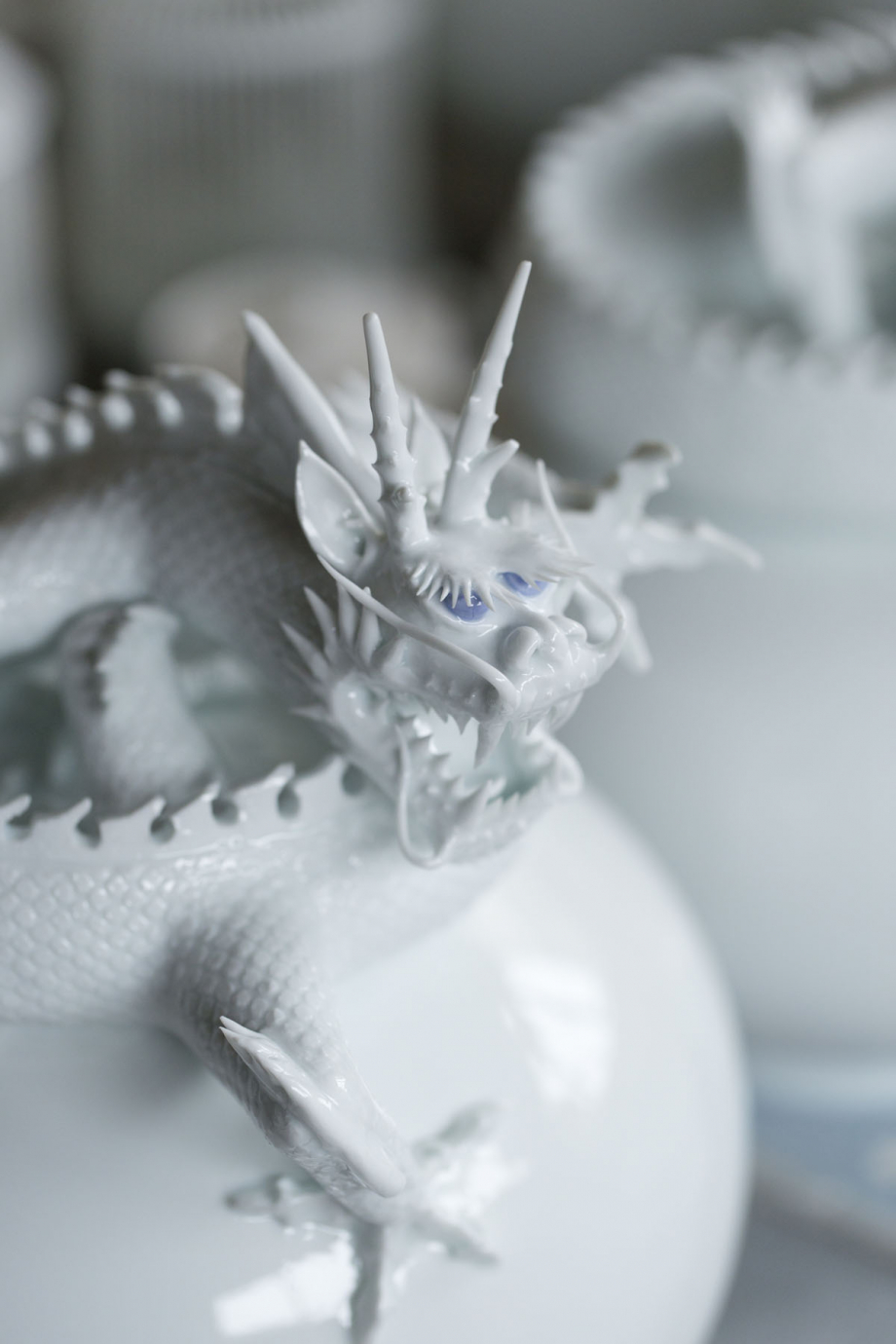 Continually refined for the lords of the domain, Mikawachi ware acquired a reputation for unsurpassed standards of craftsmanship and meticulously painted brushwork. At Sasebo’s Hirado Etsuzan kiln, the finely honed skills have been passed down through the generations to today’s master potter Hitoshi Imamura (professionally known as Hirado Etsuzan XIV). He has now been working his magic on pristinely white hand-formed and cutout designs for more than half a century. No matter how intricate the design, he shuns any division of labor and fires his pieces in their entirety, without separating them into parts. “It’s all about the whiteness and delicate thinness,” says Imamura quietly. “The key to making pieces that can stand next to those of my predecessors is simply to keep on making.” 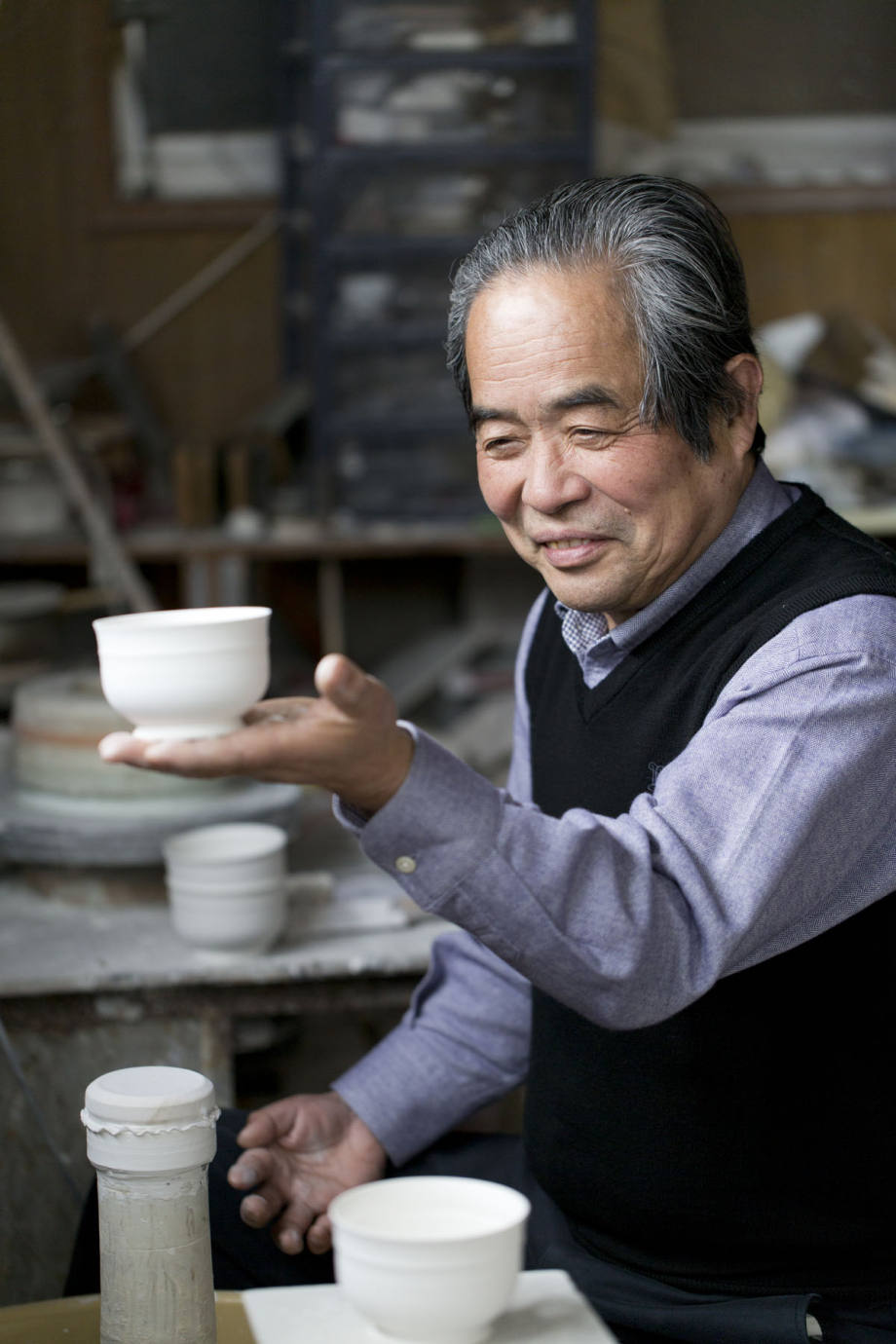 Hitoshi Imamura
Imamura was born in 1942 in Mikawachi. After high school in Sasebo, he apprenticed under potter Kozuru Kazan. In 1961 he began training with Hirado Etsuzan XII (the professional name of his father, Shikao Imamura), and in 1969 he gained the name Hirado Etsuzan XIV. His hand-forming technique was designated an Intangible Cultural Property by the city of Sasebo in 2014. In 2017 his work was exhibited at the Fujita Museum hall in Osaka. His “Insect Cage with Chrysanthemum Flower” was selected as an Imperial gift in 2019 to celebrate the enthronement of Emperor Naruhito. In 2021, Imamura was designated an Intangible Cultural Property by Nagasaki prefecture for his Mikawachi ware crafting technique.
Kakufusa / Hirado Etsuzan kiln
692 Mikawachi-cho, Sasebo, Nagasaki
Tel. 0956-30-8520
10 AM to 5 PM
Closed irregularly
Photography by Kazuhiko Suzuki
<For more on the article of Mikawachi ware and other craft traditions of Kyushu, look for the “Cruising Kyushu” feature in the KIJE 2017 Spring / Summer isssue, vol. 39.>