Connecting heritage and the future by forging new understanding―HOSOO RESIDENCE

HOSOO, the venerable Nishijin-ori weaver of Kyoto, has been taking strides to change the future of Japanese craftsmanship. In two installments, witness how HOSOO’s endeavors have unfolded and are giving new meaning to passing on tradition―as if bringing to light the true essence of Japanese aesthetics and time-honored arts in a global scope.

South of the Kyoto Imperial Palace, at the end of a nondescript alley, stands a century-old machiya townhouse that blossomed into the exclusive HOSOO RESIDENCE inn in 2017. Transformed with traditional techniques and a contemporary sensibility, the property accommodates only two guests at a time. 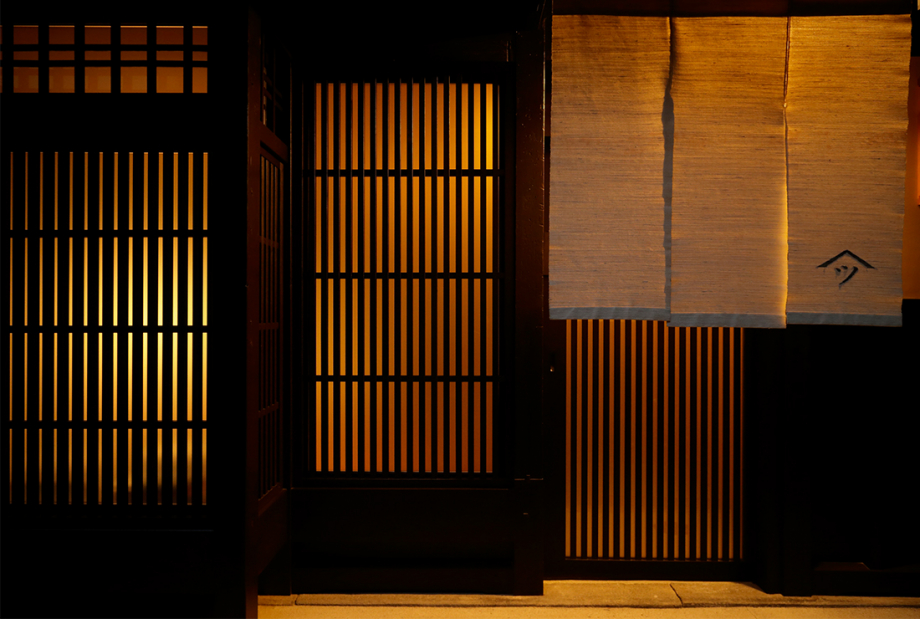 The renovation project was directed by Masataka Hosoo, the 12th-generation head of the renowned Nishijin-ori silk weaver HOSOO, established in 1688. He says, “Many details here reveal traditional Japanese techniques, not in a purely Japanese manner but in a contemporary way.” For example, when you pass through the latticed front door, you immediately see the tricolor earthen wall pictured on the main image. It was built with the hanchiku or rammed earth method, which dates back to the Asuka period from the late sixth to the early eighth century. The method was employed in the construction of many of Kyoto’s temples and shrines. Here is a modern interpretation, accentuating the natural colors of earth collected in different parts of Japan. Hosoo says, “We wanted to convey the beauties of natural colors formed slowly over decades or even centuries, the textures of materials that change as time passes, and the interplay of light and shadow.” 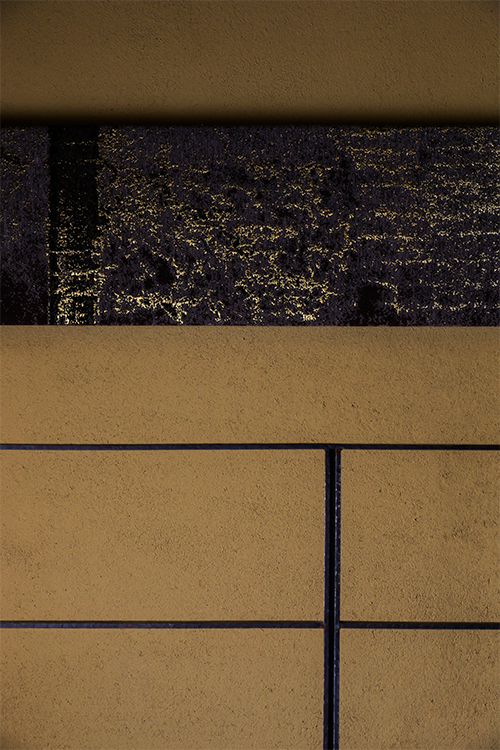 The Nishijin-ori art piece seen in the photograph above measures over 6 meters wide. It is a testament to the technical prowess of HOSOO weavers: patterns emerge either in gold or silver, depending on the direction from which you are looking. “The patterns are based on photographs of this machiya’s original walls and pillars,” Hosoo explains. “You could say we first digitized the building’s ‘memories,’ then wove the digital patterns back into analog forms.” 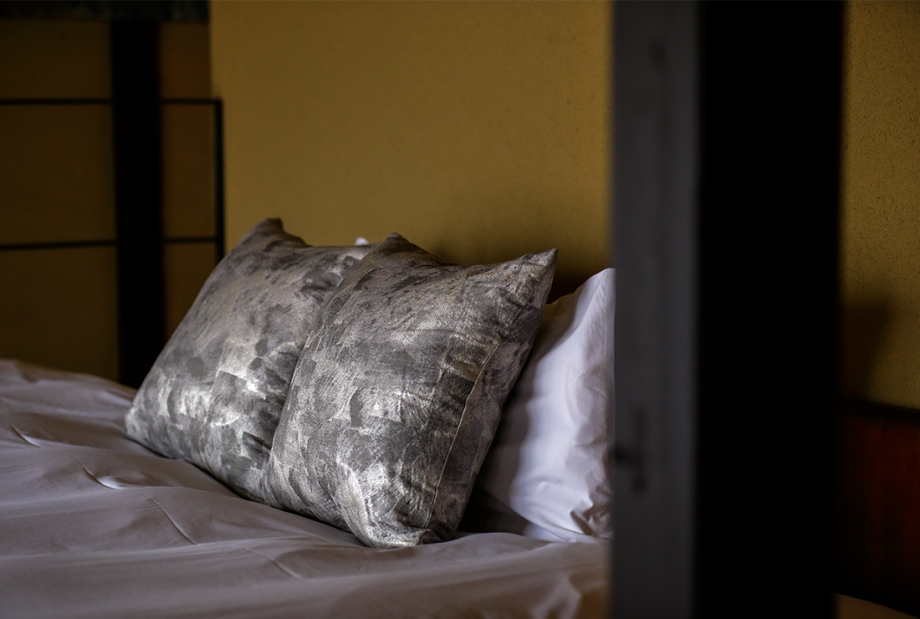 Fabrics were crafted with the Nishijin-ori technique of weaving in washi paper pasted with silver leaf.

A stay at the HOSOO RESIDENCE puts you in close contact with craftsmanship that is very much alive in Kyoto, from original furniture adorned with the weaver’s textiles to tea caddies by the long-established maker Kaikado and an Asahi-ware tea set crafted with clay that was left to rest for more than a century. You can handle these pieces and, if you like, purchase them. 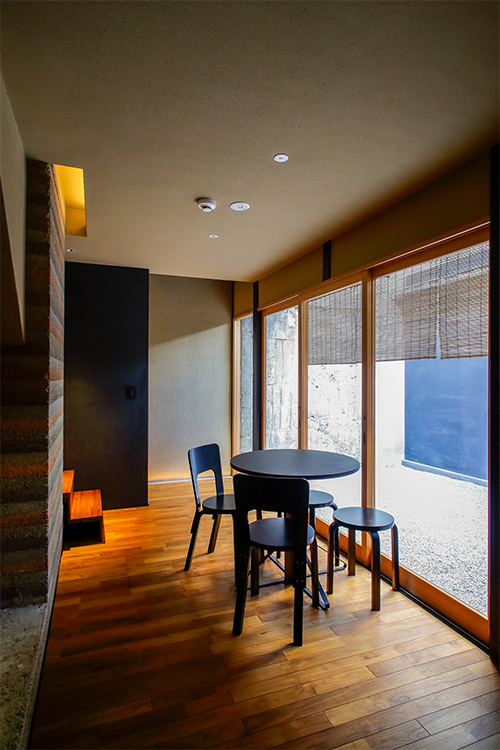 A stay at the inn is like visiting an exclusive showroom. On the east side is a minimalist courtyard with white gravel reflecting natural light into the interior, where shadows change dramatically throughout the day.

The inn’s mission is to promote the craft behind these articles. Its Beyond Kyoto program offers a custom-designed chauffeured tour of traditional workshops, temples and shrines, gardens, and tea-ceremony rooms. “Kyoto has probably the greatest concentration of traditional crafts in the world, and I’m proud of that,” Hosoo says. “We would like to share the background stories of these creations, and we hope the inn can act as an intermediary between craftsmen who are preserving Japan’s cultural heritage and our guests.” 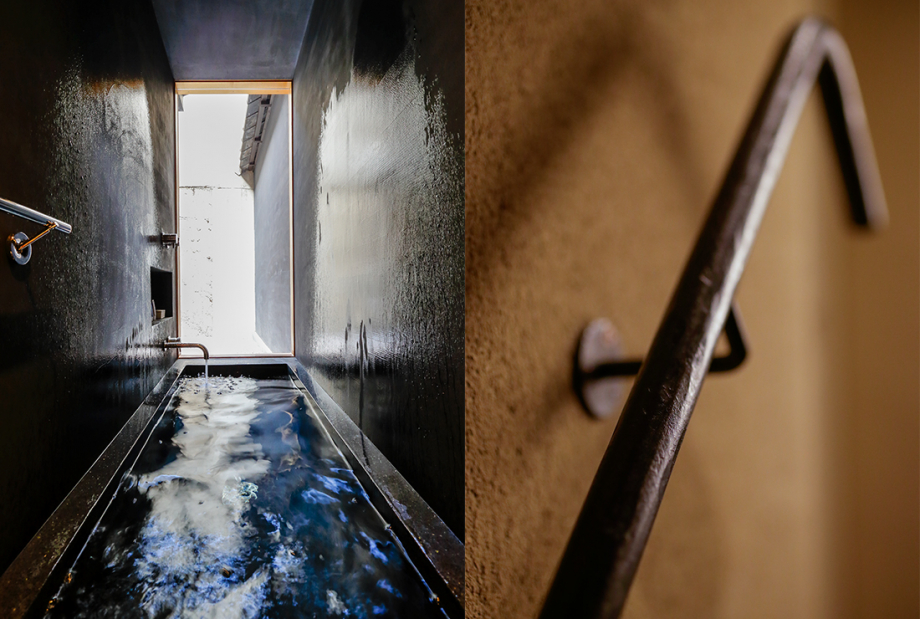 Left: The distinctive bathtub is made of plaster polished using the traditional togidashi technique. Black plaster walls glisten when moist. Right: Railings were hand-hammered for a crafted texture.