Created from the fibers of trees brimming with life force, washi, Japan’s traditional handmade paper, is treasured as a symbol of the sacred energy that sustains us all. That’s why the paper decorations known as mizuhiki are an indispensable part of the country’s New Year celebrations, when they embody people’s hopes and prayers for the 12 months ahead. 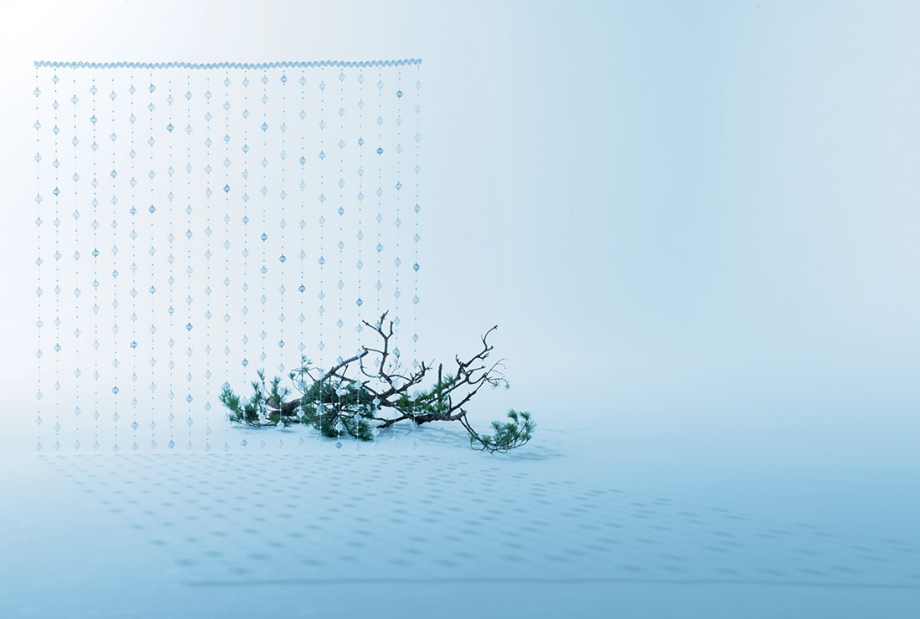 New Year decorations in Japan serve as an abode for divine spirits. They are designed to purge the negative residue of the old year and prepare a purified space in which to welcome those spirits for the year to come. The mizuhiki shown here is meant to create a sacred boundary to ward off evil, so it is made from plain white washi, which epitomizes purity. Titled “Hatsuyuki” (First Snow), the work evokes the heavy, moisture-laden snow that falls during winter in Kanazawa. The juxtaposition of dry branches and evergreen needles of the Japanese red pine represents the interconnectedness of the old and new years.

Since the introduction of papermaking techniques from continental Asia in the early seventh century, Japan has developed its own unique paper culture. This unassuming material is deeply rooted in many aspects of Japanese life, as demonstrated by the enduring popularity of shoji and fusuma―two types of sliding door made light and easy to handle, as well as decorative, by the use of paper. But washi, the traditional paper of Japan, is much more than a versatile resource. It is also intimately associated with celebration.

From time immemorial, inhabitants of the Japanese archipelago have revered trees as the dwelling places of divine spirits, and it’s trees that provide the raw material for washi. The tough black bark of the paper mulberry tree is repeatedly washed in clean, clear water until its fibers can be reconstituted into sheets of white paper. This arduous process is likened to a form of purification, and so washi has come to be seen as possessing the power to ward off evil. Woven into three-dimensional shapes from cords of tightly twisted paper, mizuhiki ornaments have a particularly spiritual significance, drawing deeply from the well of traditional culture to express prayers, wishes, and the joy of celebration. 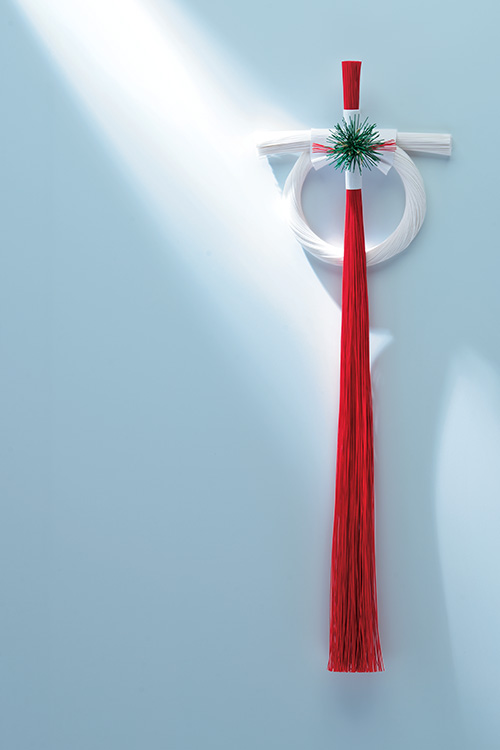 The white loop carries a prayer for good fortune in the coming year, while the red column symbolizes the link between heaven and earth. White also represents the ascent of the morning sun, and red the evening sun setting. “Rin” (a name that can variously mean circle, dignity, or coolness) cuts a lovely, austere figure in the crisp chill air of a new year.

Yuriko Hirose is a maker of mizuhiki who lives in the city of Kanazawa. In her words, “Traditional crafts have value because people love them and use them. If people were to lose interest in them, handicrafts would get shunted aside and probably disappear.”

Washi has long been a crucial element of auspicious occasions in Japan. If that special legacy is to be passed on to future generations, Hirose says it’s important to continue developing it in ways that maintain its place in people’s hearts.

New Year decorations express our gratitude for the year past and our hopes for the year ahead. In Japan, that invariably involves a flourish of traditional paper designs. It’s a beautiful custom that deserves to be kept alive and well.

Yuriko Hirose
Born in Kanazawa, Hirose studied the history of Christian art at Kwansei Gakuin University Graduate School. Self-taught in the art of mizuhiki, she first noticed at cultural exchange events how the decorations enthralled people from other countries. She creates works that add a contemporary sensibility to traditional mizuhiki, expressing what she calls “Japanese form and spirit.”