Performed by three puppeteers per doll, a single narrator speaking all the roles, and one shamisen player providing the music, ningyo-joruri bunraku is a composite art form that packs a surprisingly powerful emotional punch. Dating back to the Edo period (1603–1867), this unique puppet theater was granted UNESCO Intangible Cultural Heritage status in 2008.

There are a number of reasons why bunraku can be called a composite art form. First, there is the extremely high quality of the puppets themselves. Most of the puppet heads currently in use are the work of the late master puppet carver Oe Minosuke IV (1907–1997), so even the newest are over 20 years old. If used and repaired with care, Oe’s heads can be expected to last for a century, it is said. 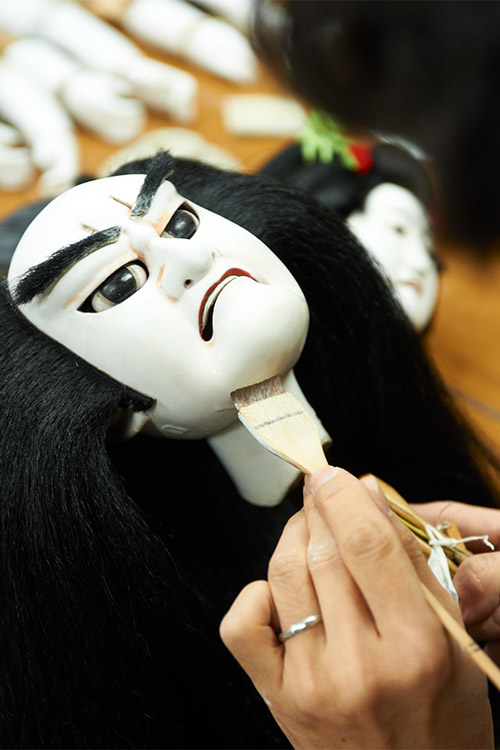 The head is retouched for each performance with gofun, a paint made of glue and pulverized shell; the utmost care is taken to ensure that these precious puppets can be used for another 100 years.

A hairdresser known as a tokoyama styles the hair of the puppet head to fit the role, after which the lead puppeteer himself dresses the puppet in a costume sewn by the costume maker. With this, the puppet is finally ready to go on stage. 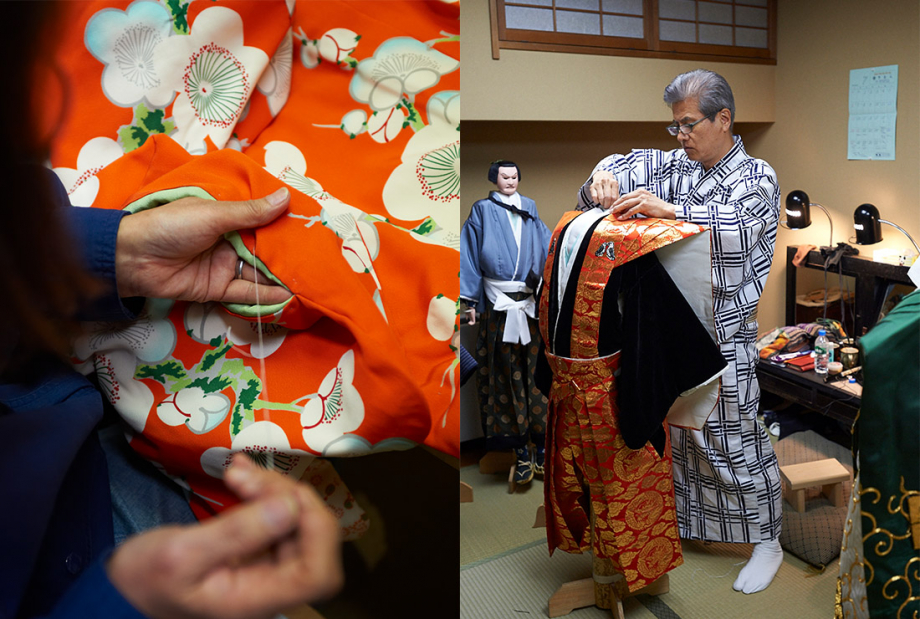 Furthermore, each puppet is worked by three puppeteers. Novices start out as ashi-zukai, who control the feet, and remain in that role for about 10 years before spending another 10 to 15 years working the left hand as hidari-zukai. Only after paying their dues in these subordinate positions can they become an omo-zukai, the lead puppeteer—but even then, they must hone their skills for several more years before they will be allowed to handle the leading-character puppets. 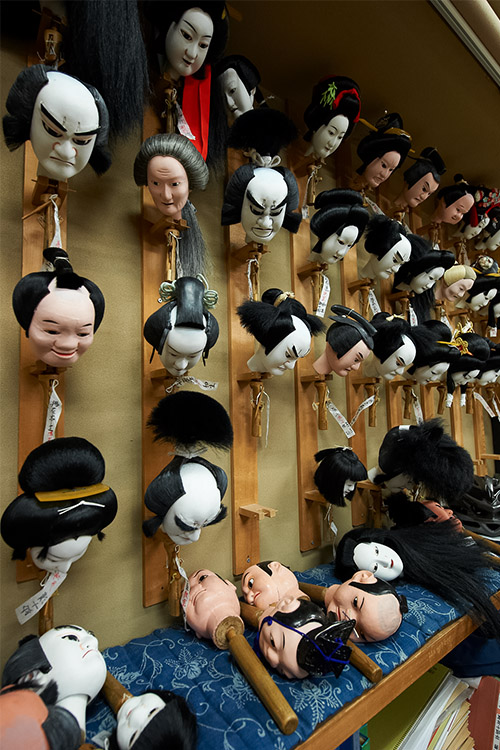 Carved wooden heads of every variety await their turn in the spotlight.

Finally, the puppeteers are guided in their performance by the narrator or tayu and the shamisen player—usually only one of each. Sitting on a dais at stage left, the tayu chants all the parts, expertly altering his voice from the delicate cadences of princesses to the manly utterances of warriors, equally at home reciting the words of children or old men and women. Next to him sits the shamisen player, who sometimes strikes his instrument with percussive force and other times coaxes sorrowful, heart-rending melodies from it. To draw an analogy with opera, the shamisen player is the orchestra, setting the scene and the emotional tone, while the tayu is the singer, relating in song both the play’s narrative and the dialogue of its characters. Only when these performances mesh perfectly does the mute puppet begin to convey the story with its entire body. At that moment, the artistry of narrator, musician, and puppeteer blends into one and the puppet truly comes alive.

The courtesan Akoya is forced to play the koto in the famous “Akoya kotozeme” (Akoya Koto Torture) scene from Dannoura kabuto gunki (The War Chronicles of Dannoura).

The ultimate goal of the performers, stagehands, and other staff who spend years perfecting their craft is to become one with the puppets. Onstage, their varied skills join forces to ensure that the only thing the audience sees is puppets bringing the tayu’s tale to life. Bunraku possesses an extraordinary ability to carry the audience to this point, and that magic is in large part owed to its composite nature. It is no wonder, then, that this one-of-a-kind puppet theater now enjoys global recognition as an Intangible Cultural Heritage.

Bunraku performances take place every month except for March and October at either the National Theatre in Tokyo or the National Bunraku Theatre in Osaka (schedule subject to change due to COVID-19).

For more information, see the National Theatre of Japan website at
www2.ntj.jac.go.jp/unesco/bunraku/en

This article is an excerpt from Kateigaho International Japan Edition 2020 Autumn/Winter issue.