The photo shows a komon (daily wear) kimono made of dobby weave fabric, tie-dyed to create a unique asa-no-ha pattern. The large asa-no-ha pattern is designed with fading lines here and there for a soft look. Matched with a goldfish obi, the attire is perfect for a summer outing.

The asa-no-ha pattern is one of the waritsuke patterns that consist of one shape repeated across an area (more on waritsuke patterns here). Six triangles are combined together to make regular hexagons in this pattern. The name is said to have come from the pattern’s resemblance to hemp leaves. The pattern has been around since ancient times – it can be seen on Buddhist statues from the Heian period (794-1185), on which the pattern is created using the kirikane technique.

>Kirikane technique refers to a method which involves applying thin strips of metallic foils on the surface of an artwork to design patterns. Animal glue is often used for application.

The pattern became popular among women in the late Edo period (1603-1867) after a Kabuki actor Arashi Rikan used this pattern on his costume playing a girl in the play“Imose no Kadomatsu”. Back then, the pattern was widely called “osome-gata”, named after “Osome”, the name of the role. 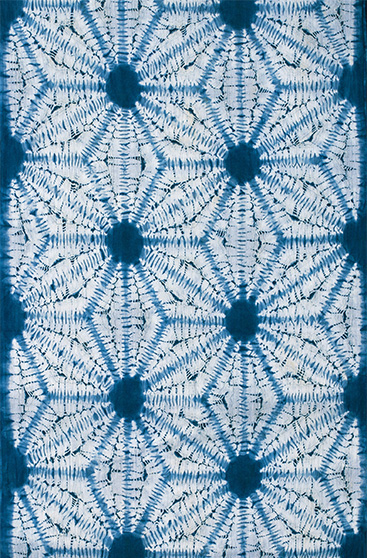 Asa-no-ha mon (hemp-leaf pattern)
When the asa-no-ha shape is repeated horizontally and diagonally, the pattern is called “asa-no-ha tsunagi” (meaning “linked asa-no-ha”).  After the pattern became popular among women in the Edo period, it became widely used on clothes for newborn babies and children’s underwear.

Because hemp grows straight up towards the sky, the pattern was often used on children’s garments to express wishes for their healthy growth.  It was a custom for parents in Japan to dress their newborn babies in asa-no-ha patterned clothes, in red for girls and in yellow or pale blue-green for boys. While the custom is no longer common, the traditional pattern still remains a regular on kimono, obi and naga-juban (full-length kimono undergarment).。 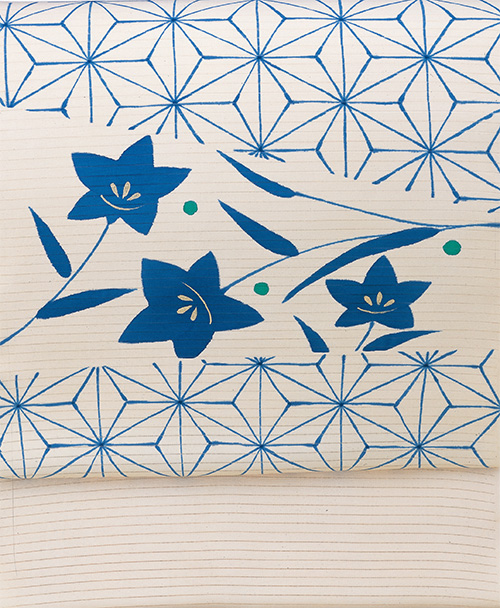 Yabure Asa-no-ha (torn hemp leaf)
Asa-no-ha pattern has many variations and yabure asa-no-ha is the most common of all. The repetition of the leaf is partially broken in this pattern.

【Recommended season for wearing this kimono pattern】
All year round, summer