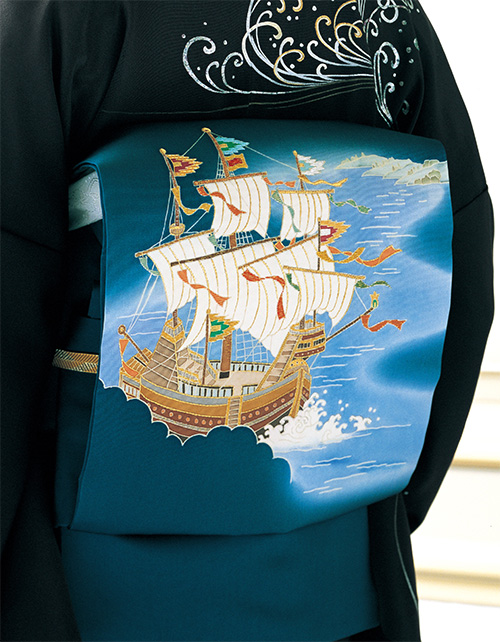 Ships began appearing as patterns in the Muromachi (1336-1573) and Momoyama (1573-1603) periods. Ships used in patterns are mainly uniquely-shaped sailboats, houseboats and foreign ships. These ships are used as standalone patterns or combined with waves, birds and aquatic plants like reeds.

Tasteful arrangements include a ship with only its bow showing from a bush of reeds.

Nanbansen (Foreign ship)
This pattern is based on large ships from Spain and Portugal in the late Muromachi period to Edo period (1603-1867). Filled with admiration for an unknown land, this pattern was considered a very dashing and modern one at the time. Dutch and British ships later began arriving on Japanese shores, making nanbansen a collective term for all ships from Europe.

Nanbansen patterns can be seen on Noh costumes and battle surcoats from this period. Today, the patterns are used on homongi (formal kimono) and obi. 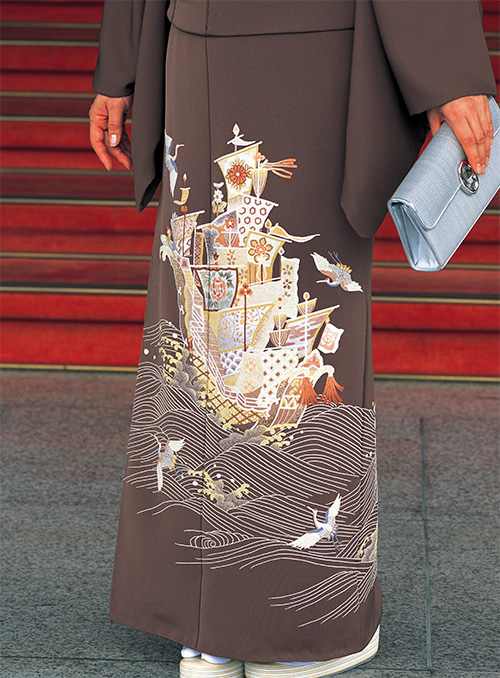 Takarabune (Treasure ship)
Takarabune pattern shows sailboats filled with treasures. In the past, people often slept with a picture of takarabune underneath their pillows on the second of January to have lucky dreams.

At first the pattern pictured treasure-filled sailboats, but developed into those with the Seven Gods of Good Fortune onboard the ships in the Edo period. 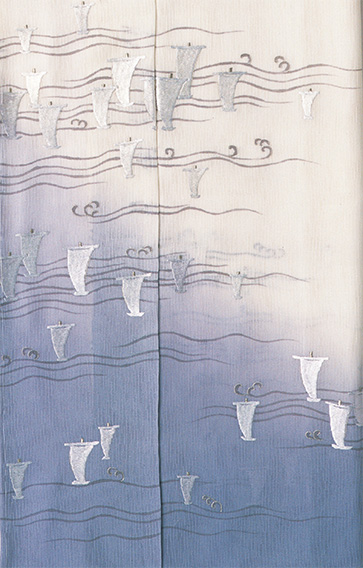 Hokakebune (Sailboat)
This pattern is based on boats with sails. Small sailboats were a familiar and indispensable item for the common folk, used to deliver firewood, coal and vegetables across narrow rivers. The pattern appears to have a sense of familiar comfort and ease to it.

In contrast, larger sailboats that carry heavy loads for long distances were seen with admiration, bringing rare goods to destinations. These sailboats are often depicted with larger-than-life sails swelling in the wind, expressing hopes and dreams for the future. 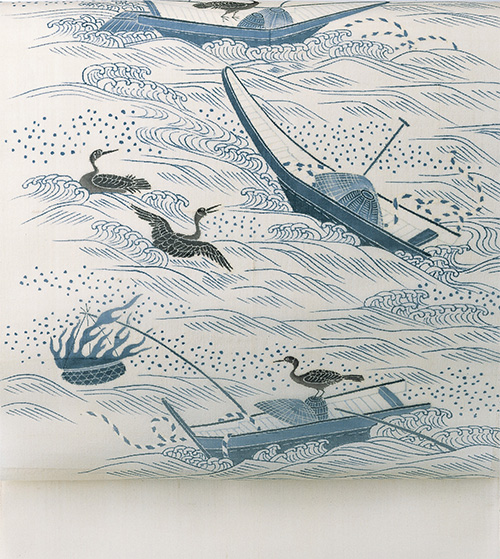 Ukai-kagaribi (Cormorant fishing with bonfire)
Ukai-kagaribi pattern shows a type of fishing that uses trained cormorants (birds) and bonfires to catch sweetfish and other river fish. The 1300-year-old ukai-kagaribi tradition is still alive in Japan, nowadays held as a tourist attraction in the Nagara River, Gifu prefecture, from May 11th to October 15th every year.

The photo shows a summer obi with ukai-kagaribi patterns dyed with indigo. 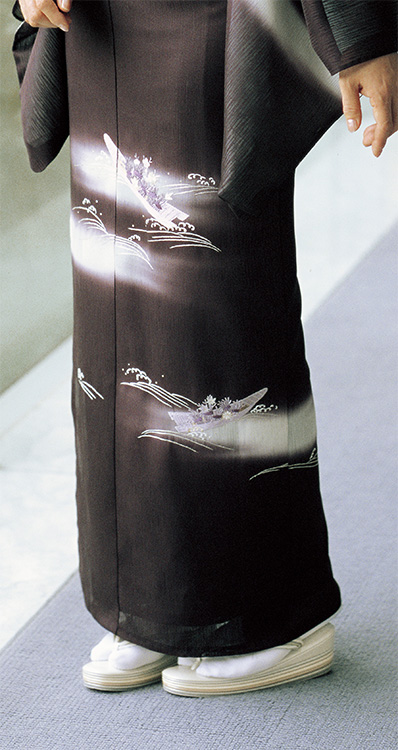 Hanafune (Flower boats)
Hanafune patterns show small boats filled with flowers. Beautiful seasonal flowers fill the boats as they slowly travel down a small river in this tasteful design. The pattern in this photo shows boats traveling in various directions, giving the design a vibrant and lively touch.

【Recommended season for wearing this kimono pattern】
All year round, summer and New Year’s Day