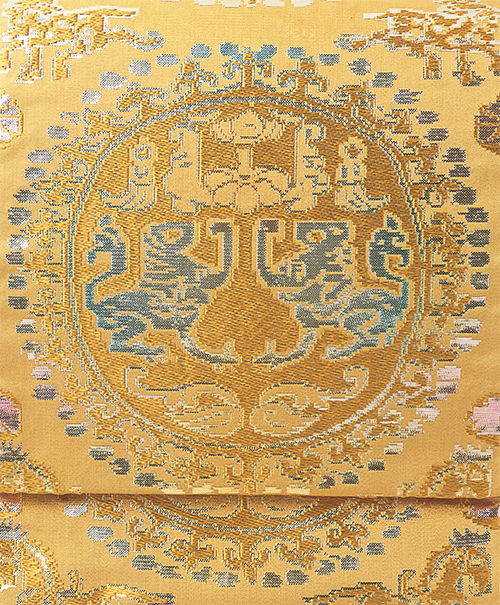 The photo shows a renjyu en-mon with white tigers and peacocks designed inside the circle.

Shosoin is a treasure house at Todaiji in Nara, a temple built in the Nara period (710-794). It was utilized as a storage space for the royal court. Inside, a number of items that belonged to Emperor Shomu can be found, many of which were brought in from Western Asia (Sasanian Empire in Persia, or today’s Iran) and China, adding an international color to the collection.

The number of treasures inside Shosoin is vast — dyed and woven goods alone count more than 100 thousand items. These fabrics are typically called “Shosoin-gire”. Technically, the term “Shosoin pattern” refers only to the patterns seen on these Shosoin gire, but in a wider definition, the term also includes patterns that depict any of the Shosoin treasures including musical instruments and furniture pieces, as well as patterns found on “Horyuji-gire” (fabrics from Horyuji temple, another temple in Nara).

In other words, the term “Shosoin pattern” widely refers to patterns seen in the Nara period that were influenced by Western Asia and China. 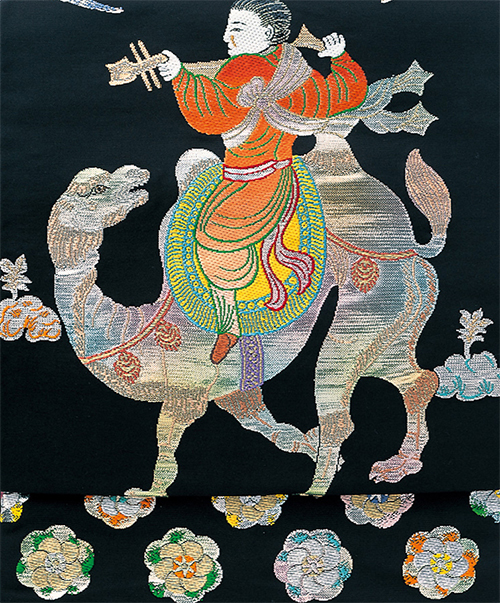 Some of the well-known Shosoin patterns include plant-based patterns like hanamon (circular patterns based on flowers), karahana (Chinese flowers) and karakusa (foliage scroll), as well as animal patterns such as phoenix, deer, peacock and bird. Animal motifs combined with those of humans, plants and flowers are also included in the terminology, such as shuryo-mon (hunting patterns) and jyuka-doubutsu-mon (patterns of animals under the trees).

These patterns are mostly designed on obi, but some are seen on tomesode (formal kimono for married women) and homongi (formal kimono) due to the formal rank of the patterns.

Let’s take a look at six types of Shosoin patterns. 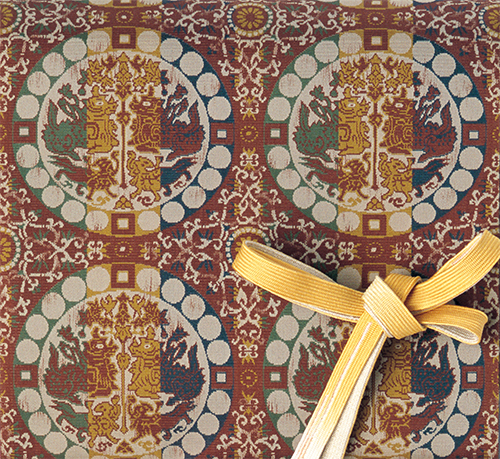 Renjyu-mon（bead-pattern）
Renjyu-mon literally means small bead-pattern. Circular patterns with beads lined up around them are called “renjyu en-mon” (“en” means “circle”). Lions, birds, beasts and people on horsebacks are drawn inside the circle. These patterns are often seen on woven fabrics found in Horyuji temple and Shosoin.  This pattern was born in Ancient Persia and was brought into Japan in the Nara period.

Hanakui-dori (flower-eating birds)
Hanakui-dori shows birds holding flowers in their beaks. Hanakui-dori patterns from Persia and China are found in Shosoin, with birds ranging from parrots and phoenixes to mandarin ducks (more on mandarin duck patterns here), Japanese long-tailed fowls and cranes (more on crane patterns here). The birds can be seen holding various items, from hosoge (a flower pattern in the karakusa-mon family) and yoraku (ornaments adorning Buddhist statues or altars) to pine trees and grasses. 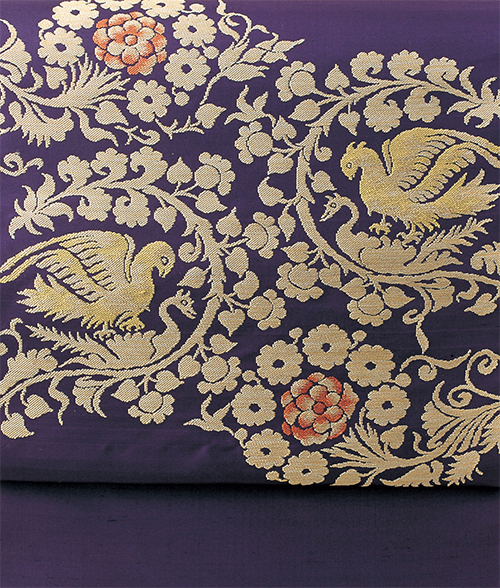 The photo shows an exotic hanakui-dori pattern, which later evolved into a Japanese pattern named “matsukui-tsuru”, with cranes holding pine tree twigs in their beaks.

Shokkou-mon
This pattern was originally based on patterns found on Horyuji-gire. The name shokkou-mon came from the name of the fabric shokkou-kin brought in from China. It is a lattice pattern with rectangles and octangles placed next to each other, with karahana patterns often drawn inside the diagrams.

Karahana (Chinese flowers)
Originally from China, the pattern is not based on a specific flower but rather a combination of multiple flowers. The photo shows a gold karahana pattern on a black fabric. 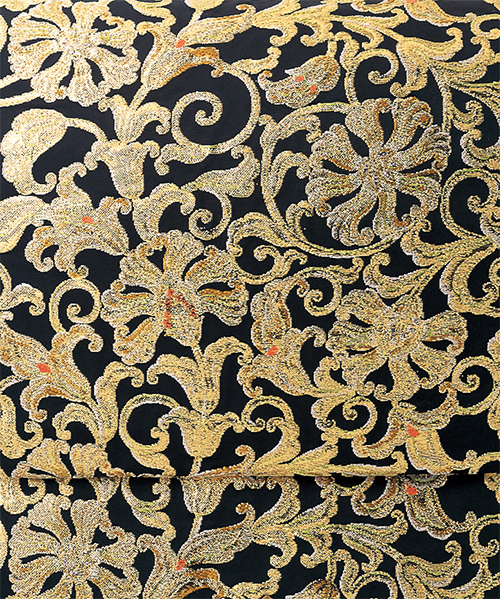 Kiba-jinbutsu (person on horseback)
The pattern shows a person on horseback, usually in a hunting scene. The photo shows a pattern based on a design on a biwa (Japanese lute) found in Shosoin. It shows a foreigner playing a biwa while riding on a camel.

Hanamon (flower pattern)
Hanamon is a pattern inspired by patterns on twill weaves and brocades found in Shosoin. This one is also not based on any specific flower. 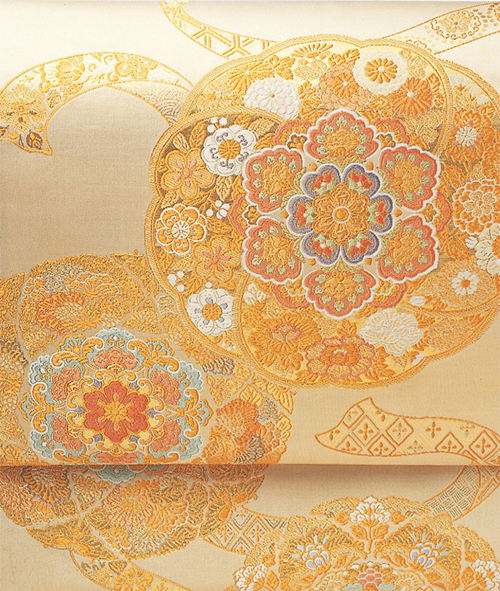 <Recommended season for wearing this kimono pattern>
All year round, New Year’s Day