In the world of Japanese tea ceremony, meibutsu refers to items selected by masters such as Sen no Rikyu, who established the wabi-cha style of tea ceremony. Meibutsu-gire refers to the cloth used to hold or receive such tools and bowls during tea ceremonies. Many of these meibutsu-gire are heavily influenced by dyed and woven fabrics from India and Southeast Asian countries, brought into Japan via China around Kamakura (1185-1333) and early Edo (1603-1867) periods. 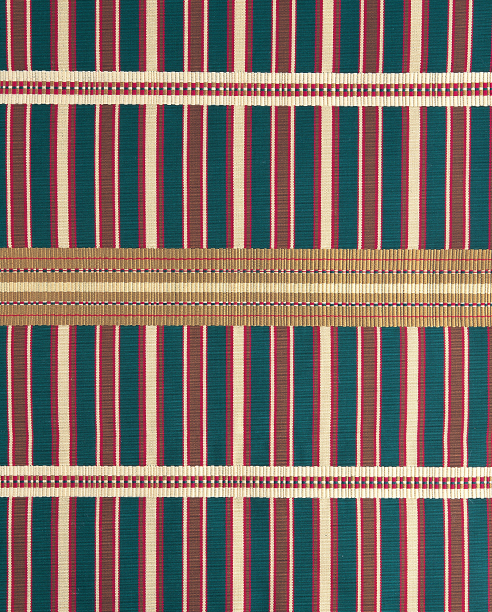 In addition to the above terms, there are special meibutsu-gire with unique names such as suminokura-kinran and wakuta-shouha. There are various origins for these names — some are taken from the names of tea ceremony tools, or the owners who cherished the cloths, while others are based on the names of places and temples where the cloths were found or manufactured in, or simply from the names of the patterns on the cloths.

Today, these patterns are widely seen not only in the world of tea ceremony but also on casual and fashionable kimono and obi. 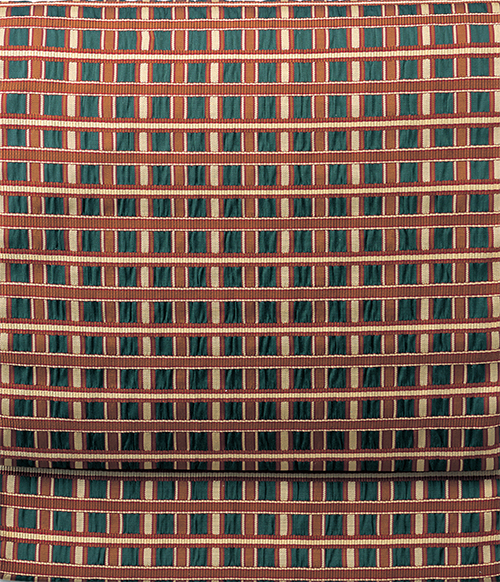 Yoshino-kantou
The name of the pattern is said to be taken from a piece of cloth gifted to a famous geisha Yoshino Tayu from Haiya Jyoueki, a wealthy merchant and tea connoisseur of Kyoto. Yoshino Tayu later became Haiya’s wife.

The thick vertical lines are accented with thinner lines in dark red and white. Coupled with horizontal lines woven in raised designs, they give a three-dimensional effect to the overall pattern.

This photo shows another variety of Yoshino-kantou pattern where the red, brown and white lines are designed in cross stripes. 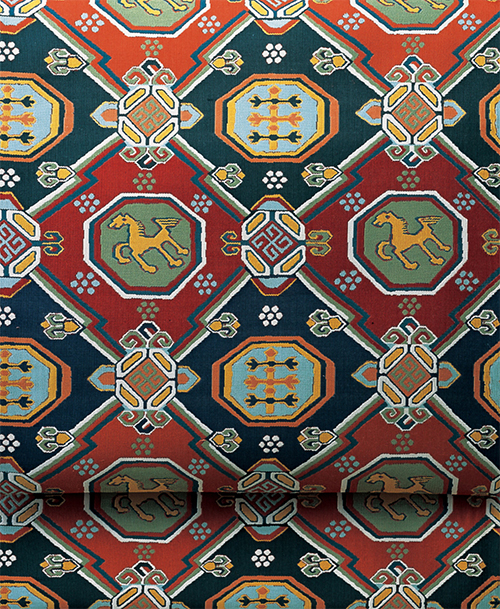 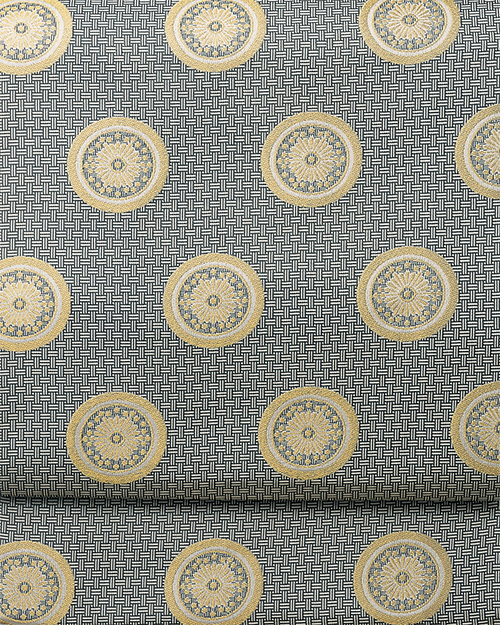 Itoya-futsu
Itoya-futsu is the name of the cloths coveted by Itoya Souyu, one of Sen no Rikyu’s disciples. The alternative name of the pattern is “Itoya-rinpou”, taken from the rinpou (Buddhist tool) designs on the fabric. Rinpou patterns are designed with golden threads on a woven fabric made out of white and navy-colored threads. 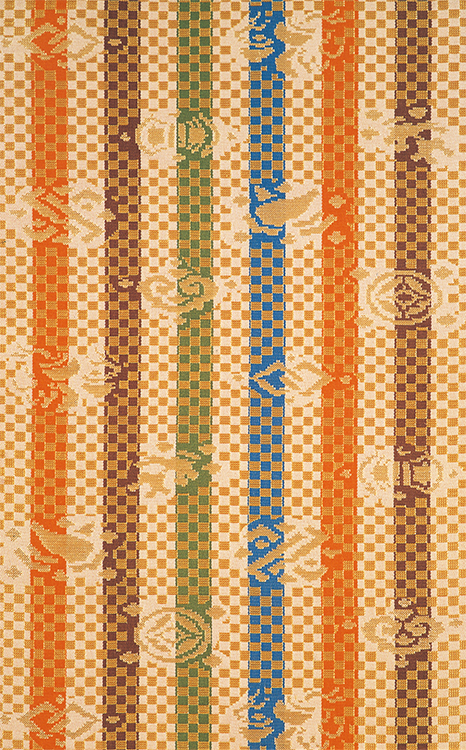 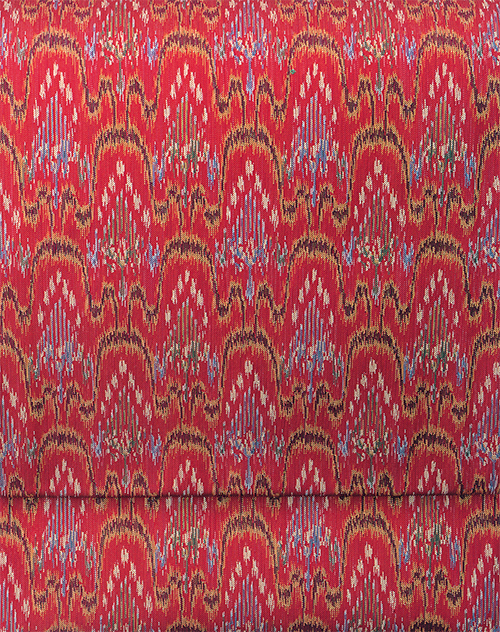 Taishi-kantou
While the name includes “kantou” which refers to stripes, the name actually is derived from canton(Guangzhou)-nishiki fabrics found in Horyuji temple. The splashed-patterned fabric uses warps that are dyed in different (in this case, around five) colors. There are various theories on where the name “Taishi” came from. Some say it is derived from Shotoku Taishi, a prominent politician of the Asuka period (592-710) who is said to have used the cloth, while others say the name originated from Taishiya Souyu, a tea ceremony practitioner who coveted the item. 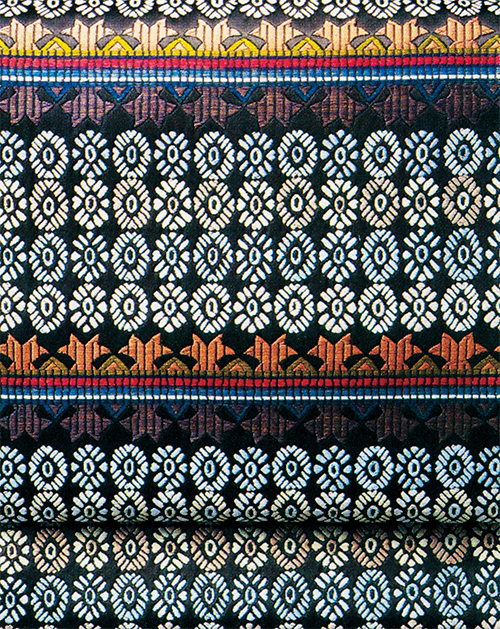 Ichigo-nishiki
The name comes from how the circular flower pattern resembles strawberries (ichigo). The pattern is widely seen on hikiya-bukuro (a bag used to keep hikiya, wooden containers that hold chai-re). It is said to have been produced in Southern China and around Persia in the 17th century. 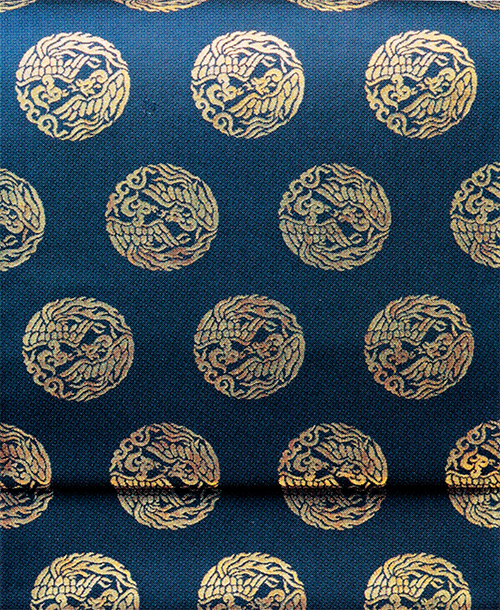 Futarishizuka-kinran
The name is said to have come from the Noh program in which Ashikaga Yoshimasa, the Muromachi period (1392-1573) shogun, wore a costume made with this fabric. Patterns of phoenix facing each other are drawn inside circles, woven with golden threads on a dark purple fabric. It was often used on the cloth for cha-ire of famed tea items.