This week, let us take a look at three patterns of summer flowers and plants that add an elegant touch of the season to any kimono style. 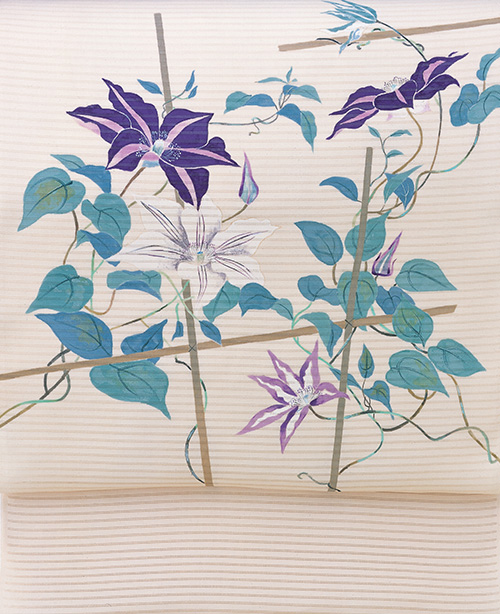 Tessen, known as Asian virginsbower (or more generally as clematis) in English, is a unique plant in the buttercup family with tendril-like stems and white or purple flowers that bloom in early summer. The name tessen―which also means “steel wire” in Japanese―is said to be taken after its hard vines that resemble wires. 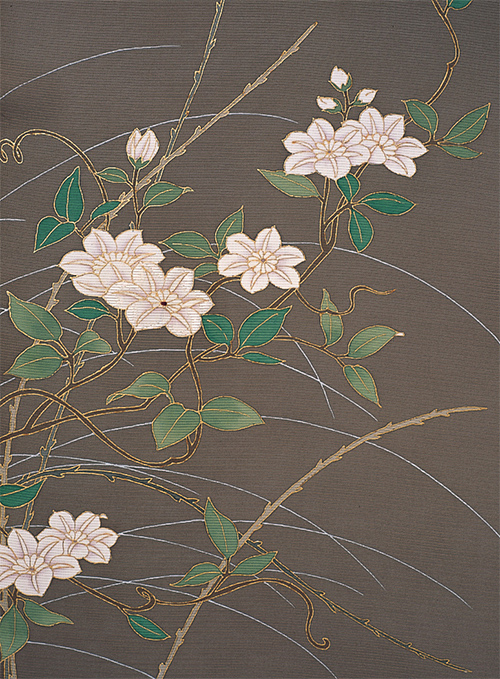 Tessen is an iconic flower of the season from May to June. Its large flowers are sometimes emphasized in bold patterns.

The plant was introduced to Japan after the mid-Muromachi period (15th century), and was often read in haiku and used in designs during the Edo period (1603-1867). Today, we can find Noh costumes and kosode (a type of narrow-sleeved kimono worn typically until the Edo period) from the Momoyama period (1573-1603) with tessen drawn like foliage scrolls.

The characteristics of the tessen flowers, leaves and vines are depicted well in this obi pattern, embroidered on an ecru-colored linen textile.

Along with the plant’s unique vines, its elegant flowers and leaves are rendered in tessen patterns. The pattern can be seen on dyed kimonos such as yuzen (kimono created with Japanese resist-dyeing techniques), bingata (kimono from Okinawa) and yukata (casual cotton kimono originally worn after bathing), as well as in embroideries and weavings.  It gives a very fresh, summery look when used alone in a kimono style. The pattern is suitable all year around when combined with other flower motifs.