This week, let’s take a look at the splendid collection of three “lucky charm” patterns.

“Zukushi”, meaning “full of” is an expression often used to call patterns that contain a collection of similarly-themed motifs. Takara-zukushi (treasure collection) is one of such patterns, along with gakki-zukushi (musical instrument collection; see article here) and kai-zukushi (collection of shells).

Takara-zukushi refers to auspicious patterns with various treasures, or lucky charms. It originated from the Chinese concepts of “happou” and “zatsu-happou” that feature auspicious treasures including items related to Buddhism, or those often pictured on Chinese potteries and illustrated plates. These concepts were brought to Japan in the Muromachi period (1336-1573) and were arranged to become takara-zukushi patterns. 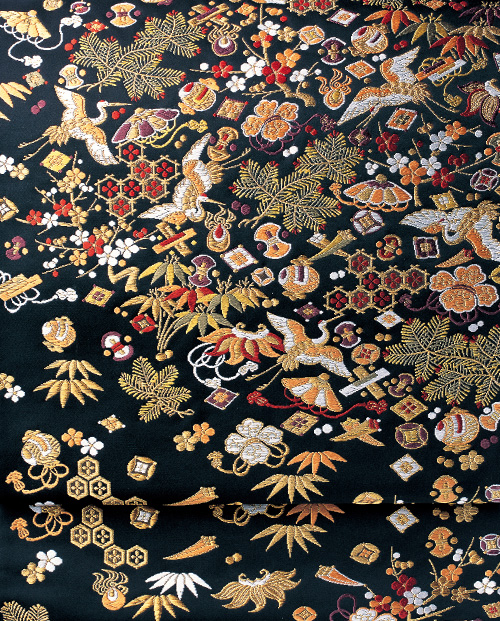 The Chinese version of takara-zukushi motifs refer to religiously auspicious patterns based on Buddhist teachings, and became the basis for the Japanese takara-zukushi pattern.

They came into use in the Edo period (1603-1867) and are often seen on kimono and obi today. There are different variations of the design―some have iconic takara-zukushi motifs scattered all over the design, while others have motifs appearing alongside shochikubai (combination of pine, bamboo and plum). 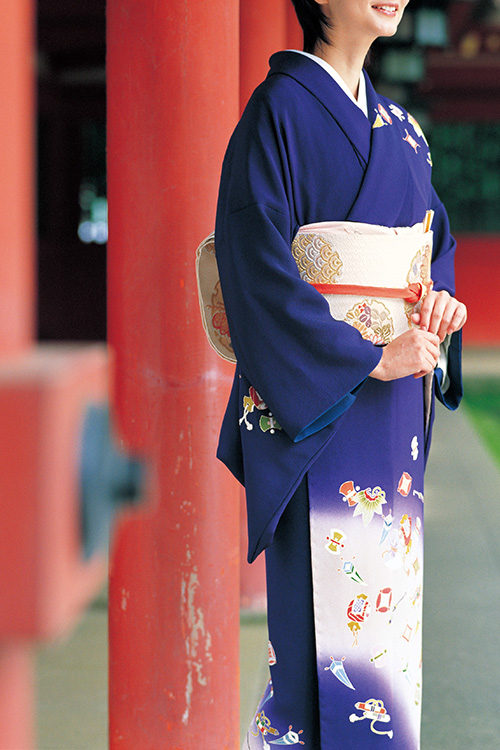 Typical treasure motifs
Various lucky treasure items are used in takara-zukushi patterns. Let us take a look at some of the well-known items below. 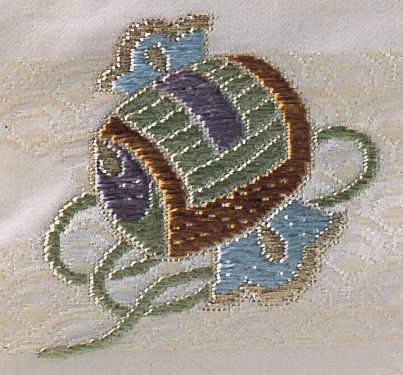 Uchide-no-kozuchi (Magic hammer)
Appearing in a Japanese fairy tale “Issun-bōshi” (“One-inch Boy”) and an item associated to Daikokuten (one of the Seven Lucky Gods), uchide-no-kozuchi is a magic hammer that makes your wishes―your hopes to become taller, or your longing for an item―come true. “Uchide-” derives from the word “utsu” (to hammer), which is phonetically the same as another Japanese word meaning “to defeat an enemy”, making this pattern a lucky charm. 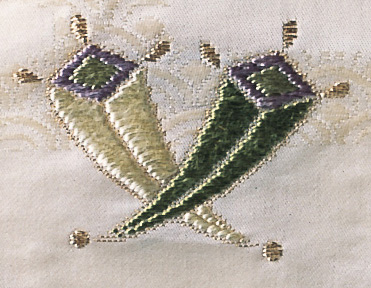 Choji (Cloves)
Cloves were brought into Japan in the Heian period (794-1185). The spice was used in medicines, fragrances, dyes and oils, and became one of the takara-zukushi patterns because of its rare value.

Fundou (Weights)
Weights used on scales are usually made of iron or brass. While some have cubic shapes, they were generally a circular shape with a slim middle part. This elegant shape, along with their usage for measuring when exchanging gold and silver, made them popular as lucky patterns. 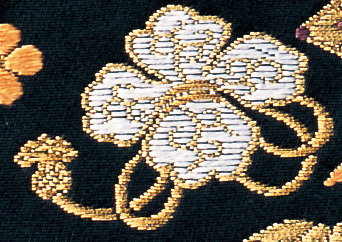 Kinnou / Kinchaku（Treasure pouch）
These two names both refer to drawstring pouches containing amulets, money, fragrances and other lucky goods. The pattern depicts pouches made with beautiful fabrics such as damask and brocade, with strings you can tie to close the opening. Kinchaku patterns are also used on its own to decorate kimono and obi. 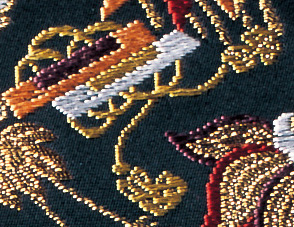 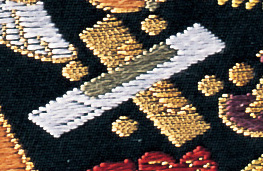 Kakure-mino (Magic cloak)
“Mino” refers to cloaks made of straw and other types of grass, worn in the rain and cold weather for protection. Kakure-mino is a mythical cloak that makes the person wearing it invisible. Appearing in various Japanese folktales, the item is said to be owned by the  tengu, an imaginary creature with magical powers and a long nose.

Kakure-gasa（Magic umbrella）
Made with similar materials to the kakure-mino above, this mythical umbrella also makes you invisible from others. 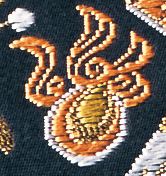 Hojyu
Meaning “treasure ball”, it used to be one of the tools related to esoteric Buddhism. It is depicted in a round shape with a pointed top, showing burning flames rising from the top and sides. The mythical ball is said to bring forth any items you wish for, such as gold, silver and treasures.

<Recommended season for wearing this kimono pattern>
All year round, New Year’s Day