Wazuka, at the very southeastern tip of Kyoto Prefecture, is an hour and half away from Kyoto by rail or by car. It’s the home of Uji tea, the finest of green teas, producing about half of all the Uji tea on the domestic market, a fact that’s surprisingly little known. Nestled in a valley along the Wazuka River, Wazuka began growing tea about 800 years ago. People living in the fourteen villages that make up Wazuka long ago began carving terraces out of the steep hillsides to plant tea bushes, perfected their skills, and have made a living from tea-growing since then. 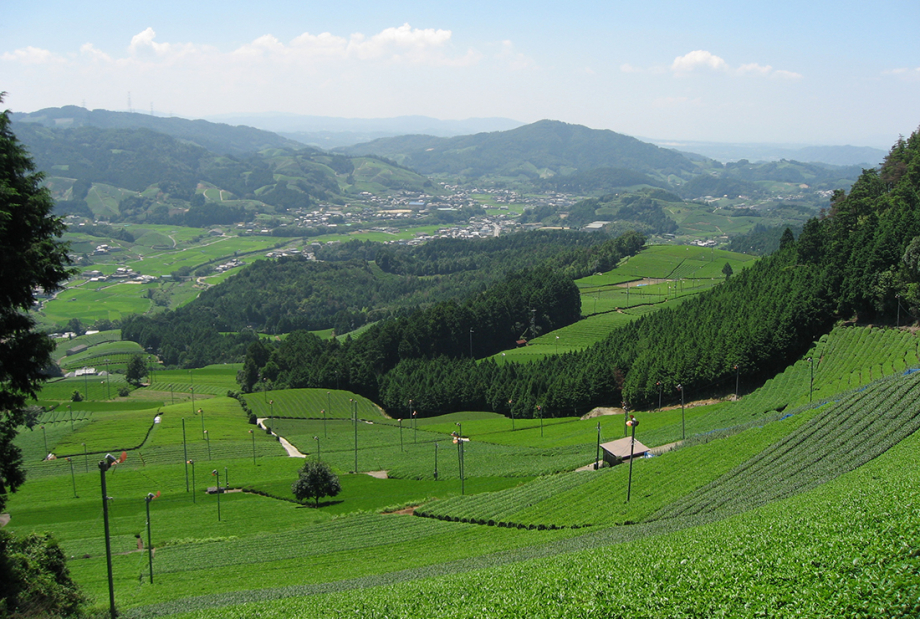 Harayama, where the first tea bushes were planted in Wazuka 800 years ago.

Natural conditions in Wazuka, blessed with clear, flowing waters, quick-draining soil, and breezes from the surrounding mountains, are ideal for growing tea. Tea bushes cover the mountainsides in a patchwork quilt as far as the eye can see, from the foothills to the high ridges, creating a breathtaking panorama.

It’s said that tea was first brought to Japan around 1,000 years ago, when Zen monks used it for medicinal purposes. As the practice of Zen grew and expanded throughout the country, so did the use of tea. Tea came to Wazuka 800 years ago when the villagers of Yubune, Harayama, Kamatsuka, Erihara, Shirasu, Ishitera and other hamlets began growing it, hoeing the steep hillsides to create terraces for planting tea bushes and nurturing a thriving tea industry. With the advent of the Meiji government in the 1860s and the drive to reach out to other countries, Wazuka began exporting tea, making the name of Uji tea known throughout the world and sparking today’s global green tea boom.

Eight centuries old, Japanese tea is now a familiar presence in all parts of the world, but life in Wazuka continues unchanged, its landscape peaceful and warm. The four seasons, revolving around the tea fields in this quiet backwater, strike the hearts of all with their beauty. There is a richness here that comes from nature and the lives of the human beings intertwined with it. 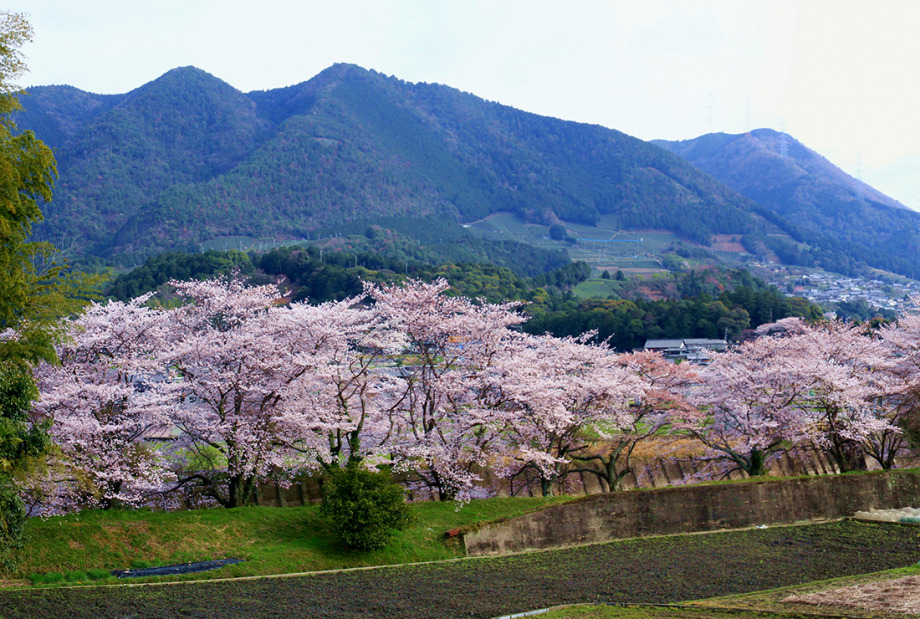 Spring comes with the blooming of the cherry trees. Tea leaves picked at this time are used to make akachan bancha (“baby” bancha) with a gentle aroma. 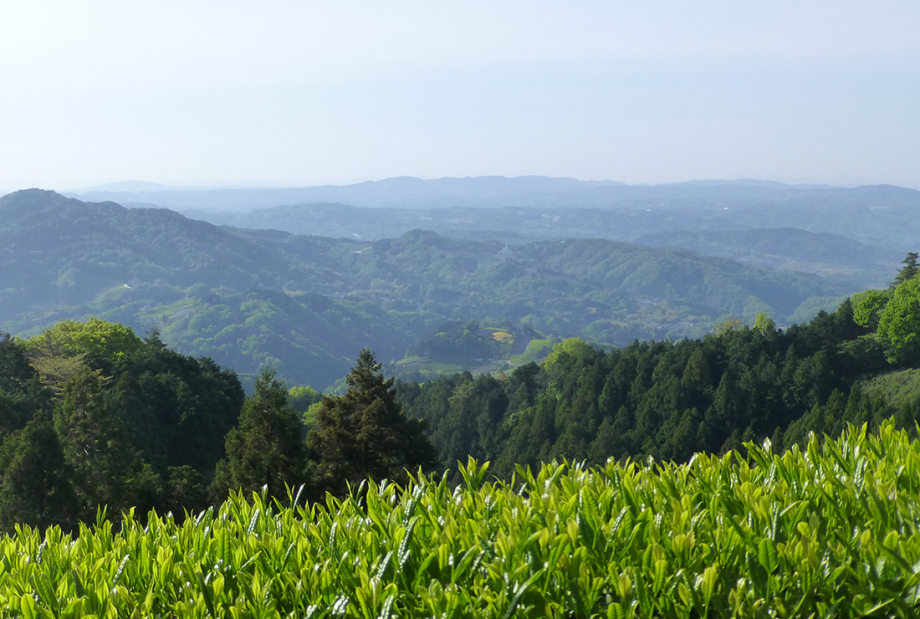 Picking first flush leaves in early May, eighty-eight days after risshun, a date in early February that marks the first day of spring according to the solar calendar. 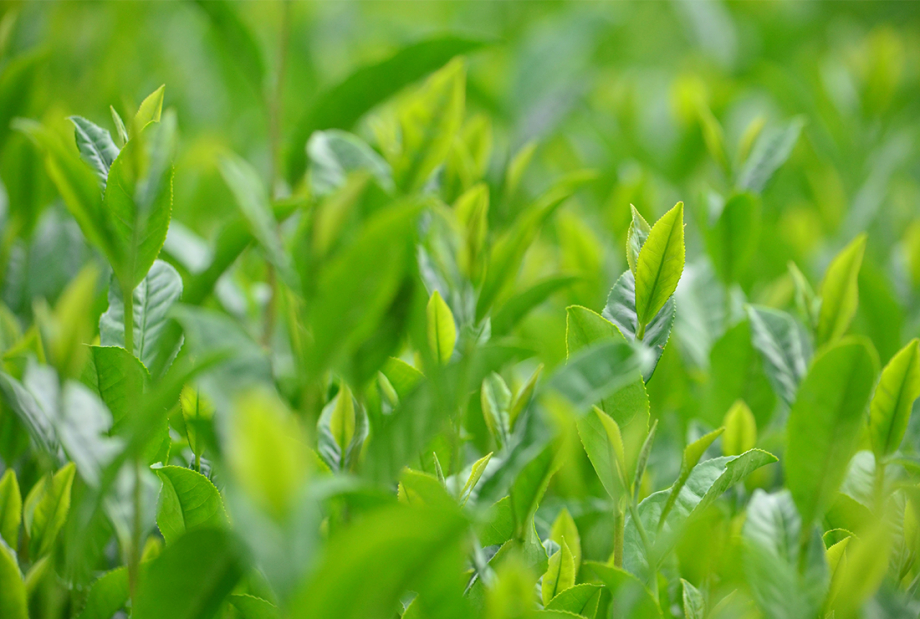 Tea leaves grown rich in catechin under the summer sun will be used for aki bancha (autumn bancha).

Fog enveloping the mountains helps give Wazuka tea its rich flavor
Tea leaves are harvested several times during the year. First flush leaves are used for high-class sencha tea and those picked later in the season are used for bancha, which is ordinary everyday tea. The highlight of the year is picking the first flush in early May, when just two brand-new leaves and the unopened bud are hand-plucked from the top of the bush. Wazuka has an integrated management system whereby all processes, from harvesting to drying the tea leaves to produce green tea, are all handled locally, to preserve the freshness and flavor of tender leaves caressed by warm May breezes used for the sencha. This tea, a clear, pale yellow liquid, has a sweet and mellow flavor that unfolds gently in the mouth. It also has a faint whiff of fog, called kirika, which is generated when fog descends on the valley after extreme fluctuations in day and nighttime temperatures. The fog protects the tea leaves from strong sunlight and imparts distinctive umami and aroma to the tea. This gives Uji tea grown in Wazuka the ultimate standing within Uji tea, which is itself the finest green tea grown in Japan.

Once the new leaves have been plucked, the tea bushes are trimmed. The trimmings harvested are used for making karinaoshi bancha, literally, bancha from trimmings. New growth appearing in summer is plucked for nibancha second flush tea, and in autumn, the leaves are plucked to use for aki bancha, fall bancha. The tea farms of Wazuka, producing tea in various flavors throughout the year, are truly a treasure of Kyoto and of Japan. 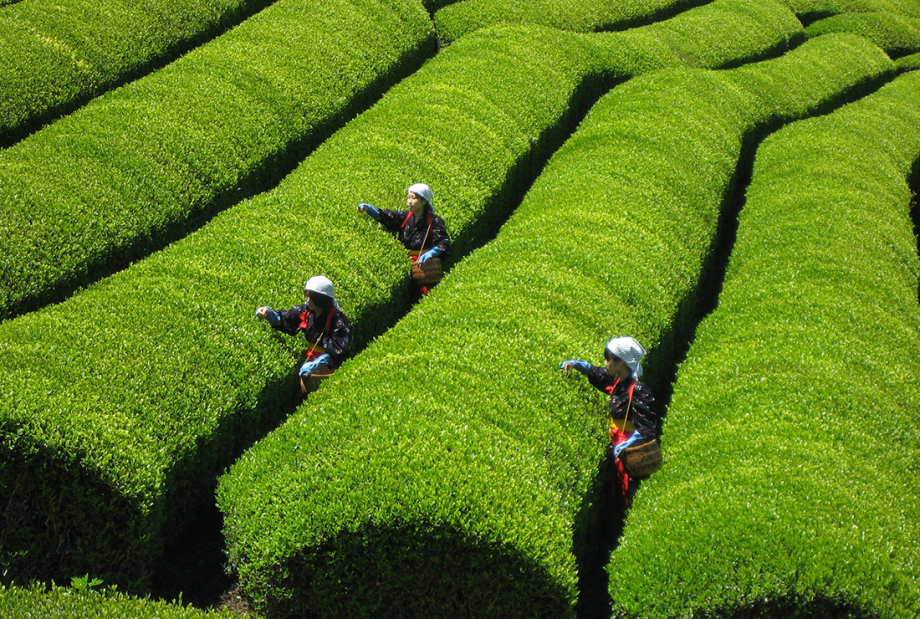 Harvesting the first leaves of the season in early May.

Wazuka, population 4,000, produces some of Japan’s finest tea, offers spectacular vistas, and is home to hard-working tea farmers. Visitors can enjoy local festivals and experience life on a tea farm. Part 2 will introduce the activities Wazuka has to offer to visitors.