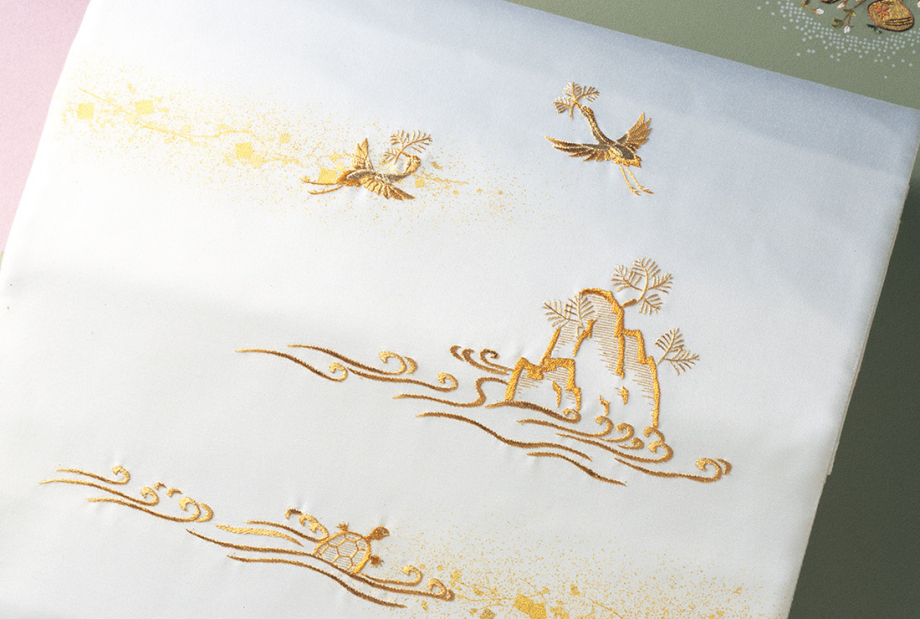 Crane and turtle patterns are popular choices for celebrations in Japan. Said to live a thousand years, cranes have long been worshipped as auspicious birds in China. In Japan, cranes with pure white feathers have been treasured for its graceful figure, both standing and flying. Upper class and common people alike have used crane motifs as kissho (lucky omen; see below) patterns throughout Japan’s history.

Crane motifs appear in the largest variety among bird-themed kimono patterns, such as hikaku (flying crane), unkaku (cranes and clouds), gunkaku (flock of cranes) and tachizuru (standing cranes), just to name a few.

>Kissho pattern is a general term for patterns that symbolize good fortune and auspicious signs. While many were influenced by Chinese culture, some were born in Japan. Well-known kissho patterns include cranes, turtles, shochikubai (combination of pine, bamboo and plum), shikunshi (combination of orchid, bamboo, chrysanthemum and plum) and takarazukushi (“full of treasures”).

Matsukuizuru
A type of hanakuidori (“birds eating flowers”) patterns, matsukuizuru depicts a crane holding a pine twig with its beaks. Hanakuidori patterns originally featured foreign birds such as parrots. Matsukuizuru patterns emerged in the Heian period (794‐1185) and became widely popular. It is considered one of the Shosoin patterns (see below).
>Shosoin is a treasure house at Todaiji in Nara, a temple built in the Nara period (710‐794). Built as a repository for the royal court, numerous items related to Emperor Shomu were found inside Shosoin. Shosoin patterns refer to artworks based on decorations found on furniture and musical instruments stored in the repository, as well as other patterns from the same period that were influenced by the cultures of China and Central Asia. 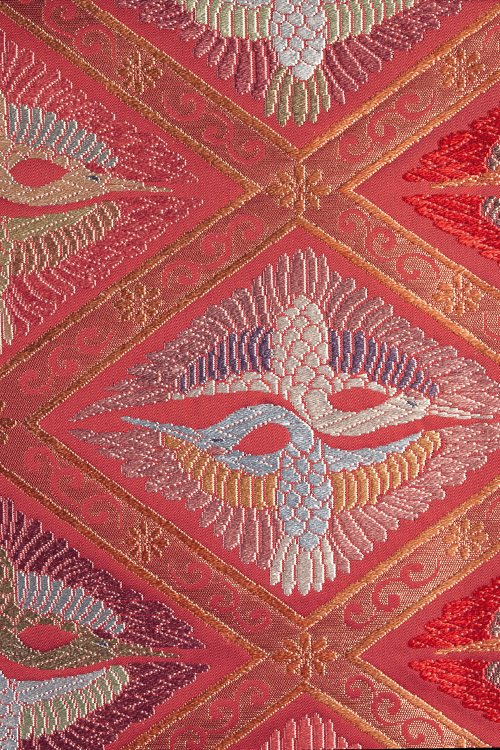 Mukai-tsurubishi
Also known simply as tsurubishi, it is a graphic representation of two cranes with their wings spread out inside a diamond shape. The two cranes are arranged face-to-face either diagonally or horizontally inside a diamond-shaped frame.  As the diamond shape is one of the yusoku patterns (see below), combining it with the auspicious crane motif can upgrade the “rank” of the pattern.
>Yusoku patterns refer to traditional decorations used for costumes, furniture and oxcarts for aristocrats from the Heian period. 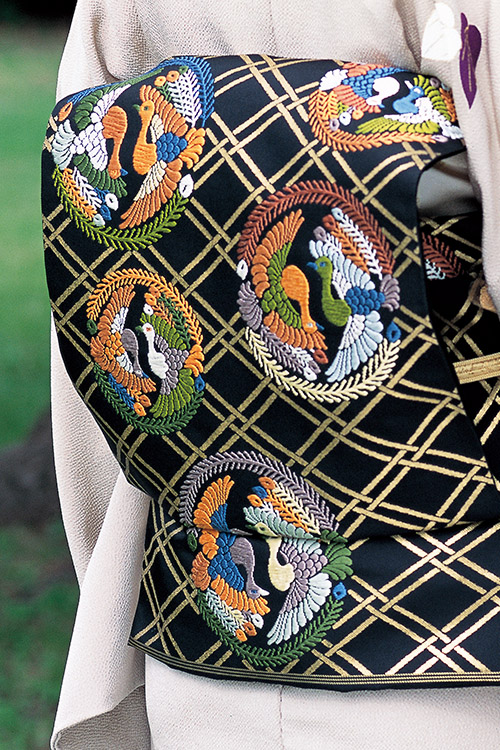 Mukai-tsurumaru
Mukai-tsurumaru represents two cranes face-to-face with each other inside a circle frame. The cranes are usually placed next to each other, but some arrangements of the pattern include a crane placed on top of the other, or cranes holding a pine twig by their beaks. The frame can be a circle or an oval. It is considered to be one of the yusoku patterns, but it is also seen on komon kimono (generally a type of casual kimono, designed with a fine, repeated pattern throughout). 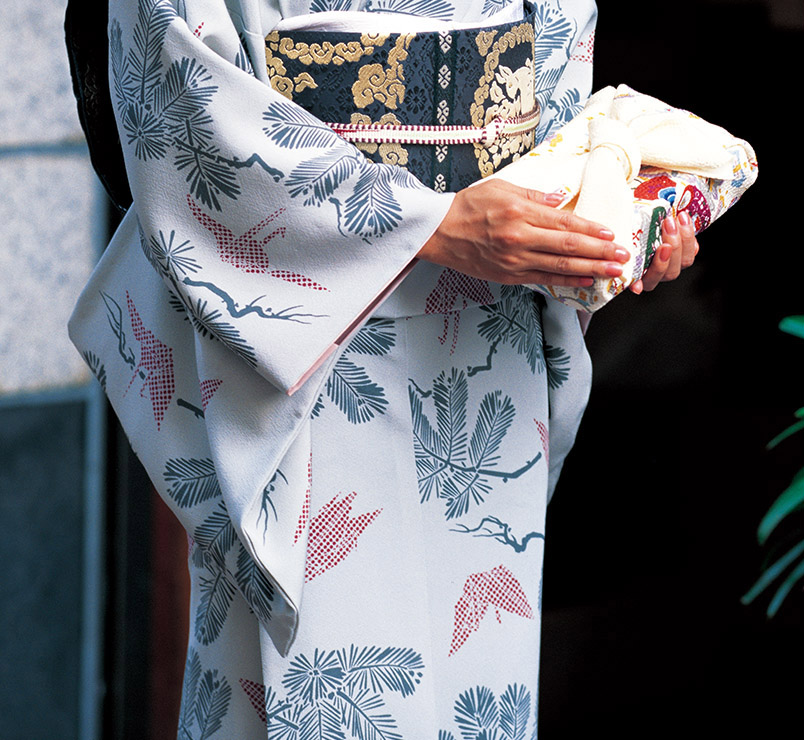 Orizuru
A graphic representation of paper cranes, the pattern came to be used in the Edo period when people started making cranes with origami paper. The pattern can be seen on komon kimono from the Edo period (1603-1867) as well as those worn today.

The tradition of giving paper cranes―sometimes a thousand of them―to wish for someone’s longevity or recovery from an illness is said to be based on the saying “cranes live for a thousand years, turtles for ten thousand years”. 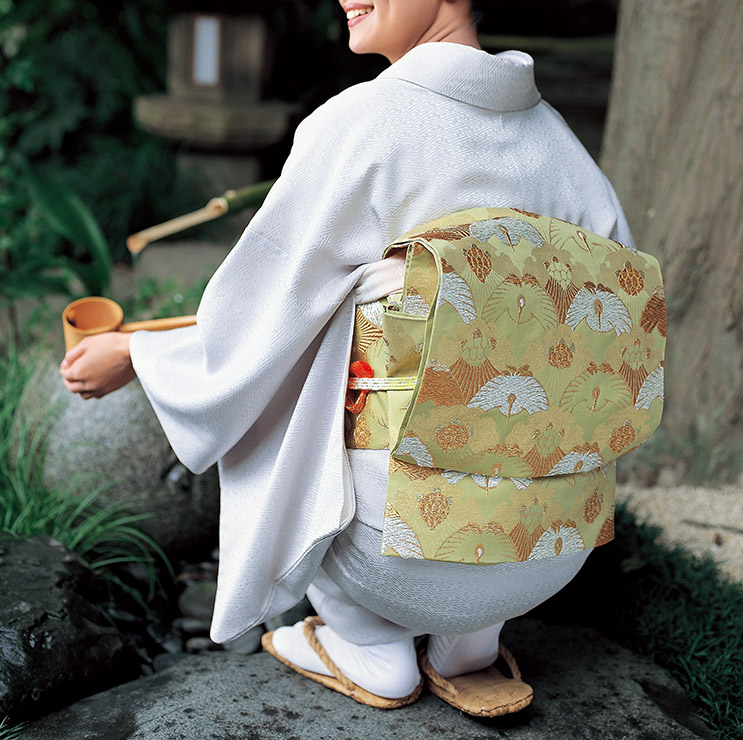 A greenish yellow obi sash with adorable tsurukame patterns. Paired with a homongi kimono (formal kimono) with a soft, glossy texture, it makes a perfect style for going out in early spring.

Tsurukame
Tsurukame is a pattern combining cranes and turtles, both symbols of longevity. Based on the horai thought, an ancient Chinese philosophy that seeks out immortality and eternal youth, the pattern was often used on clothing and crafts starting in the Heian period, and later came to be used for items such as futons for newly-weds in the Edo period. Today, the pattern can be seen beside shochikubai patterns on tomesode (formal kimono for married women)  and other types of kimono.

<Recommended season for wearing this kimono pattern>
All year round, new year’s and early spring