Yusuke Seguchi has always known sushi. His father was a sushi shokunin whose restaurant, Kikuzushi, was run out of the family home, located on a quiet residential street in Kasuga, Fukuoka. Eventually, in 2013, Seguchi took over and subsequently transformed it into a more modern, stylish and refined restaurant. 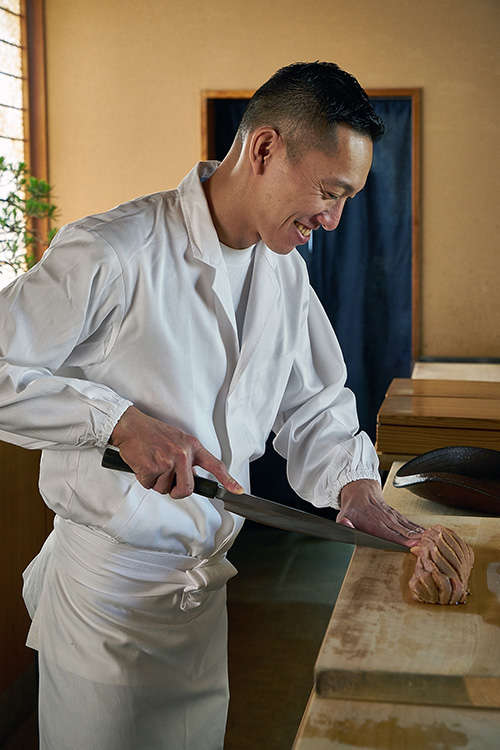 Yusuke Seguchi behind the counter.

Today, at Kikuzushi’s entrance, guests are greeted by the Seguchi’s stunning ginkgo timber counter, visible through a series of large clear glass panels, creating an atmosphere of drama and anticipation. The far wall—treated with a technique that combines Japanese washi paper and lacquer—looks as if it is made of burnt-orange and brown metal. The effect is chic and rustic, and it is perfectly juxtaposed with a cool gray, white and brown stone brick-like surface behind the counter, framed by two textured shoji screens. Seguchi divulges that he worked with a Kyushu-based designer to help evoke the local landscape with his decor. 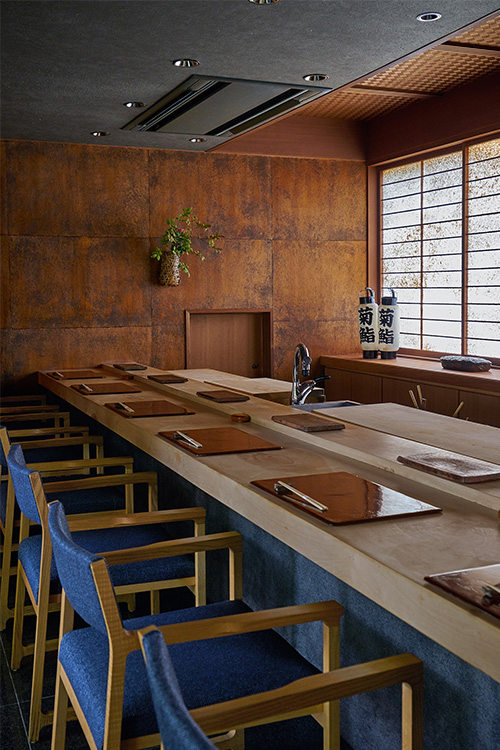 At thirty-seven, Seguchi is young to have achieved such stature in the sushi world. He cuts an impressive figure—trim, meticulously groomed, skin glowing, with short-cropped hair. After ten years of sushi training at Kougyoku Nakasu in Hakata, Fukuoka, his career was launched by a serendipitous meeting with legendary French chef Joël Robuchon, who brought Seguchi to Monaco to serve as his personal chef. 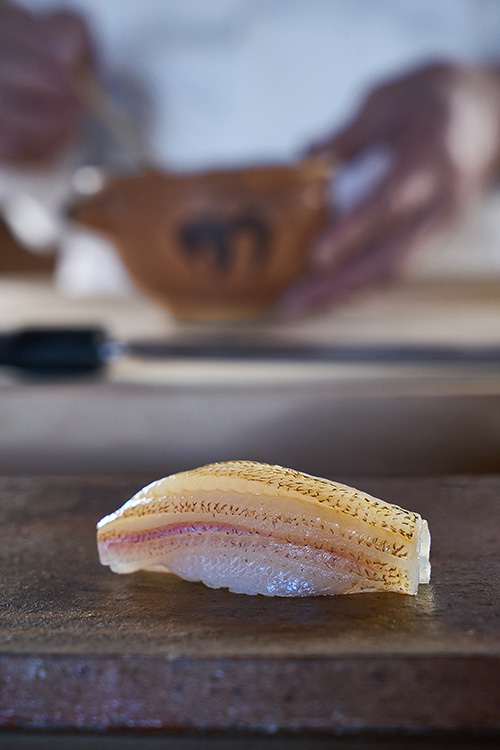 This role exposed him to new experiences and international guests. French cooking taught him to think differently; and, in turn, he enjoyed exposing locals to authentic sushi—even preparing nigiri for Prince Albert’s wedding.

Most significantly, though, he learned how to build a life outside sushi—how to sing karaoke, ride horses, hike and ski—discovering calm and relaxation. Though Seguchi enjoyed this fuller life in Monaco, he had never intended to stay forever; and when his father fell ill just two years after his arrival in Europe, he promptly returned to Fukuoka to take over the family restaurant. 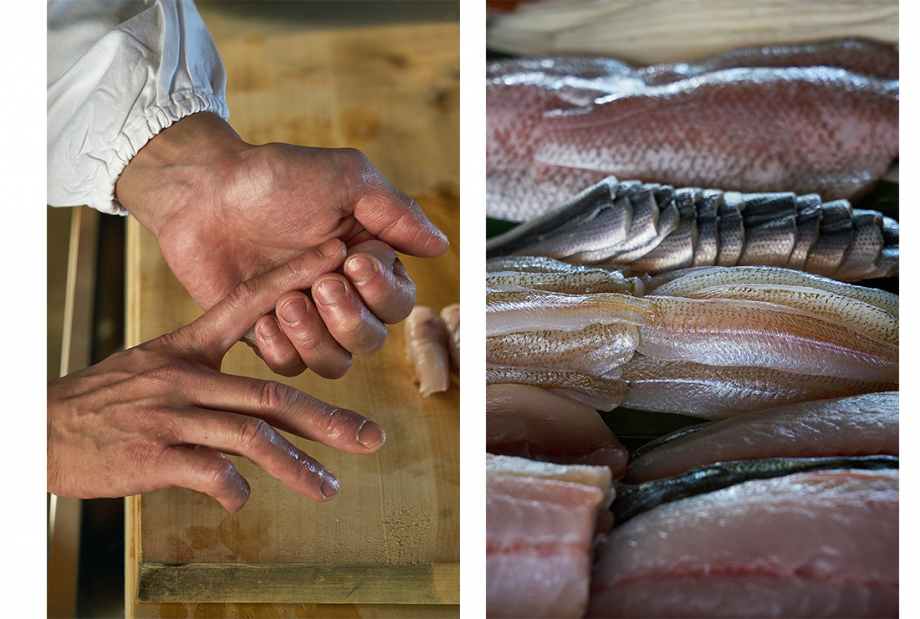 As he takes his place behind the counter and begins to slice neta (toppings) for nigiri, Seguchi exudes boundless self-assurance; he seems suddenly older beyond his years. We continue to talk about his restaurant, the process of remodeling, and the patience he acquired while trying to win over his father’s regular clients.

At first, they shunned his sushi, which is different in method, flavor and style. Seguchi uses Yokoi Shuzo red vinegar with no sugar added in his shari (seasoned rice), for which he uses Hinohikari rice, grown specially for him in Saga Prefecture. This larger grain rice is matured for over one year by a farmer who controls the husking and irrigation precisely per Seguchi’s instructions. When cooking his rice, Seguchi is painstakingly precise as to the amount and quality of water that he uses. 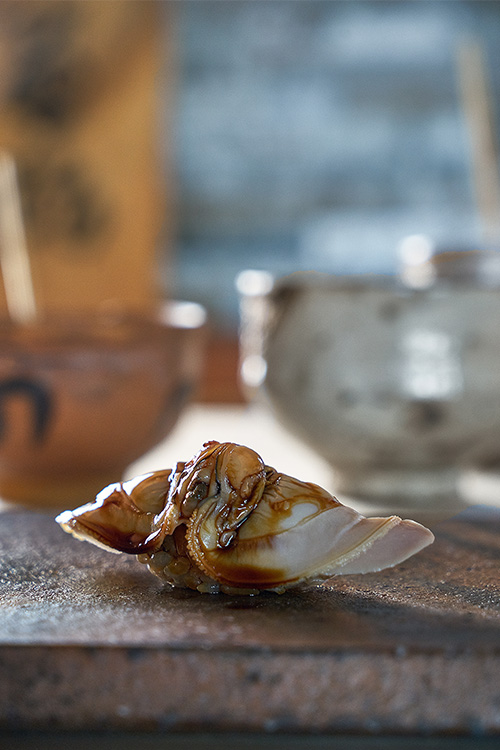 “What’s great about sushi is that it’s so simple,” says Seguchi. “It’s about the ingredients and bringing out what’s there.” He then goes on to compare his sushi to the beauty of a single flower stem: “I’m not trying to make a statement with a whole bouquet—just one flower,” he explains. “It’s not about trying to show off, but rather about where I have trained and all I have accumulated in my life. Sushi expresses each shokunin and who they are.” 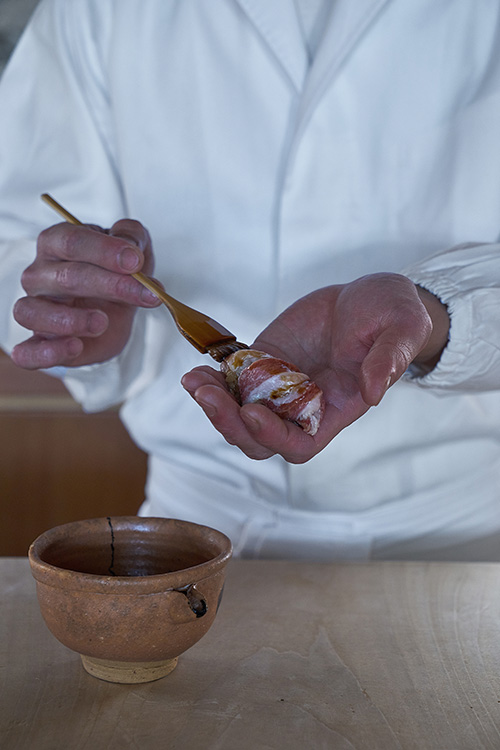 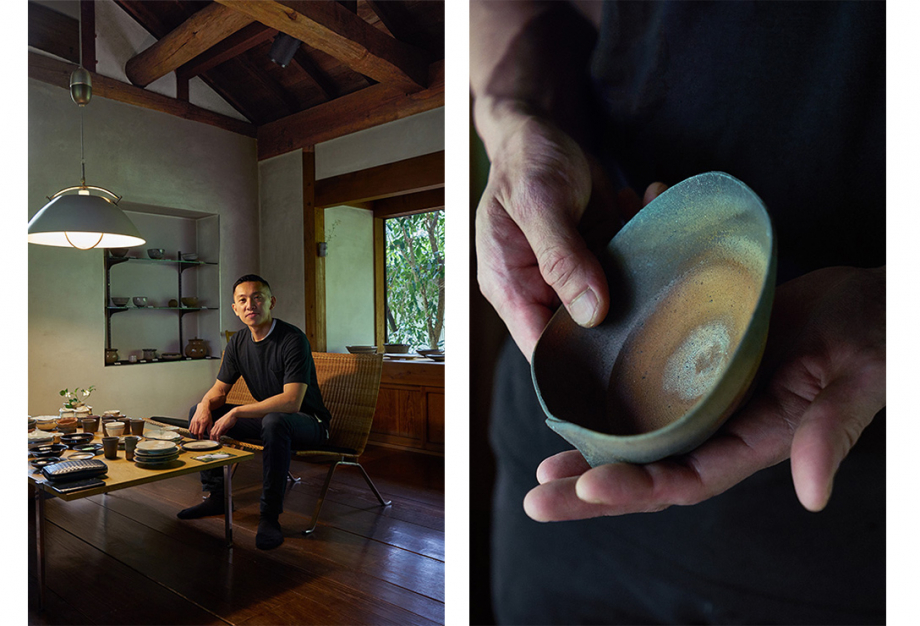 Seguchi’s use of Karatsu ware, for which the region is famous, is yet another method that the shokunin uses to express who he is, and where he comes from. “I use ceramics that are very close to nature, literally made of soil,” he remarks. And they are stunning: Each otsumami (appetizers) is served in a piece of ceramic art—a plate or a bowl—and each nigiri is placed on a rectangular slab of rustic, coarse pottery from Ryuta-gama Kiln owned by the Nakazato family. Attractive and abstract, these pieces add even more drama to the meal.